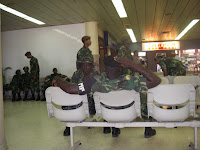 We slept in, finished packing, Antonio prepared our lunch, and we left El Pescador around 12 noon, Belizean time.  We waited in the San Pedro airport for about 30 minutes and boarded our Tropic Air flight for Belize City.  In air, I was able to see a mudding sting ray and three large tarpon circling a flat.  We picked up our bags, checked them in at the AA counter, and looked for the air-conditioned area in the airport.  While there, many Belizean soldiers came through and then, four U.S. Air Force personnel came through as well.

Our flight left a little early, had few passengers, and arrived about 30 minutes ahead of schedule.  One thing that I thought was particularly fun on the flight was seeing my house and Mom and Dad's house from the air.  We were able to spot it rather easily.

After arriving at D/FW, we waited for our gate to clear so our plane could dock; we disembarked, and began the hardest part of the trip--re-entering American soil.  We cleared the border check, and walked on, when the beagle sniffed my bag.  From my El Pescador lunch, I had left over three cantaloupe slices and a honeydew melon slice.  Since I did not get to finish them, I just put them in my purse, and did not declare them on my Customs form.  We proceed to the customs check through, where are bags are x-rayed, and my passport is withheld.  After scanning my bags, I had to have each individually searched.  The Customs guy was nice, but he told me that even though I had accidentally forgotten those four pieces of fruit were in my bag, a first-time, non-declaration of items is a $300.00 fine.  Of course, they let me go, and we were on our way to Chick-Fil-A and sweet tea!  We had a great time, added to our species list, and fished new waters, but Dorothy was right, "there is no place like home!"
Posted by flyfshrgrl at 10:27 AM