Glad to see y'all here on a Wednesday.  I looked at the calendar and didn't pay attention to Tuesday's date, and accidentally put in the date for Wednesday, instead.

It's official, the heat has gotten to me.  I accidentally plugged in the wrong date for Phish Your Fish Tuesday.  Blog Hop will be Wednesday, this week, so hop on back tomorrow for some Phishing.
Posted by flyfshrgrl at 1:58 PM No comments:

It's official!!  Mudhole's 2012 Calendar Photo Contest is in the books, and Cody and I are winners!  Originally, they said winners would be notified on the 12th, but the notifications came in yesterday.  I was kind of bummed when we didn't receive the notification, because I thought the photo was great.

Mudhole is where Cody and I shop for 97% of our rod-building supplies.  Last year, while the rod-building gang was into building a completely black rod, I changed my scheme a little.  I built a TFO Professional 6# rod whose name is Checkmate! (yes, all of my rods that I build are named), so obviously its color scheme is black and white.  Cody builds my handles making them perfectly sized for my hand, smoothe, and unique--for this rod I wanted a checkerboard handle.

I did not get the fancy butt-section wrap completed before we left (because I had changed it three times), but the reel seat section looked wonderful.  Checkmate!'s maiden voyage was on the North River, just off the Unalakleet River.  Its first fish was a Coho Salmon; its second was a Chum.  We had moved in to Butch's Cove, and were fishing for Grayling and Dolly Vardens, so Checkmate! was taking a rest.  Cody snapped its photo, I submitted Cody's photo to Mudhole way back in May, and the rest is history!  Can't wait to see where the photo ends up in the calendar! 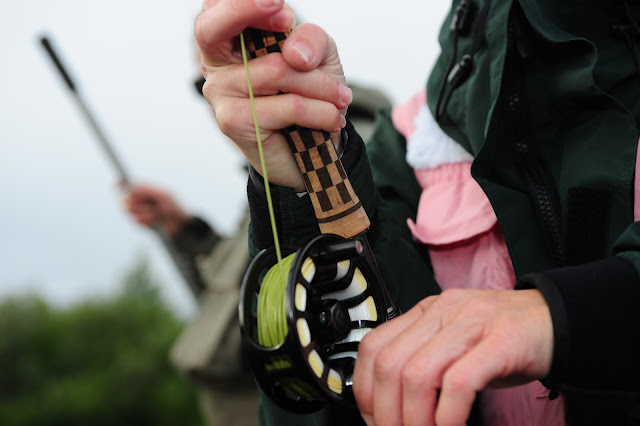 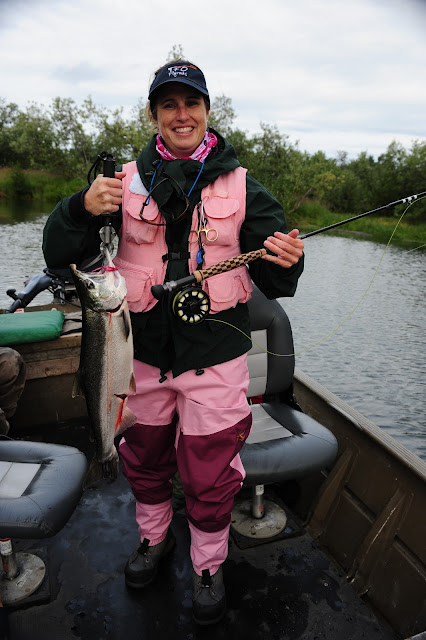 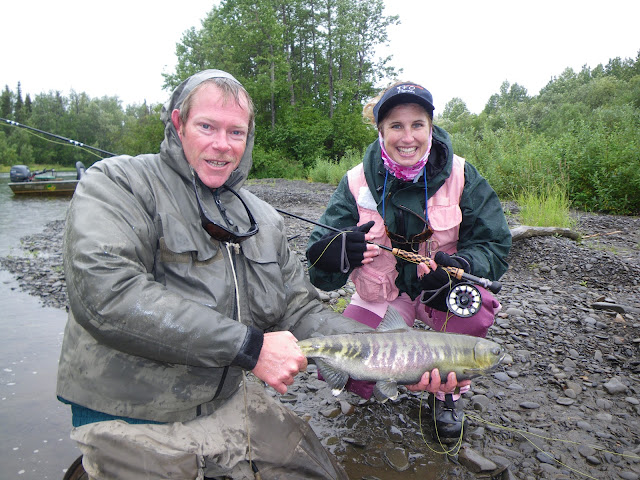 Our Redfish trip is in the books, and it was another fun TailWaters trip on

the water. Last year, Jason, Cody, and I, along with our friend Malcolm, stalked the Redfish in Port O'Connor, and after this fishing trip, I learned the Louisiana and Texas' coasts are vastly different. Louisiana water clarity is murky, and while sight-casting is possible, most casts are made in the 20 - 30 foot range. I did become much better at reading the water pushes to distinguish between the sporadic Mullet wake, and the more linear and determined V wake of the Redfish. We fished out of Port Sulphur for two days, and our day three was to be with Brian Carter, fishing out of Buras, but the rains came and stayed, so no day three. 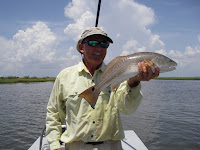 Rich Waldner guided Cody and I the first day, and we loved it. Rich likes oyster beds, and if a site wasn't producing, we picked up and moved to the next spot. We fished our way east all the way to Isle Grande Terre, where we encountered a rather nasty oil spill--not BP's oil, but rig lubricant oil; either way, it was nasty and stinky. Cody ended up catching nine, beautiful Redfish. I caught a new species, a Black Drum, for my first fish. My second fish of the day had me catching my trip goal--a 15lb. Bull Red. Rich spotted that fella 150 feet away, turned the boat nicely, and put me right on that fish. He tugged, pulled, and fought spectacularly on my 7# rod, WHOOP! I caught the last fish of the day, for a total of three fish, but I had met my goal, so everything else was just fishing.

Kirby kept us closer in the bay's lakes for day two. We hit an early spot  that had us hooking up with Reds right and left, and even though we were fishing an incoming tide, the water levels were low, and those fish sawed our leaders off on the oysterbeds. However, the oysterbeds allowed us to target the Jailbird--Sheepshead, a species Cody really wanted. I told Kirby that's what I wanted, too, but I would cast to Redfish if they were in play. I fished one of TailWaters' vibrant orange crayfish patterns, and had Sheepshead chasing my fly. Twice, the fish were biting at the fly, when [insert curse word] Mullet t-boned the Sheepshead I targeted. Cody hooked up and had SheepsheadOn!, but, because someone had told us a while back that we really had to strip-set hard to set the hook on Sheepshead, Cody ripped that fish's lip. Kirby told us that their mouths were paper-thin, just like Crappie, and provided some really great instructions on how to catch them. Unfortunately, good opportunities for Sheepshead did not occur again. With Kirby, we ended up with 10 fish for the boat, splitting the catches equally between us. Interestingly, we did not see any Black Drum.

We bunked and dined at Woodland Plantation, the home drawn on the Southern Comfort label. Nestled on the high ground in West Pointe A La Hache, the plantation takes visitors back in time. Dining and drinking in Spirits Hall provided a little awkwardness, since its 1883 origin was St. Patrick's Catholic Church. The church was relocated to its current location from Homeplace, 14 miles farther south. The original slave quarters also sits on the property, and all three buildings survived Hurricane Katrina. The alligators also like to dine on vittles served at the plantation and are not camera shy.

One thing Louisiana provided us that we can't find at home was rain. We stayed in New Orleans for three days prior to fishing, and just after we arrived on our first day, sweet, glorious rain greeted us for 2 1/2 hours, and while we were rained out on day 3, it gave us a gracious send off, too. What more could we ask--rain, Redfish, and roux--remarquables!

After a twice-delayed flight, we landed around 11:00 p.m. and arrived home around midnight.  Then, it was back to work Monday at 6:00.  I will say, I enjoyed the alarm sounding for fishing, but when it sounds for work, it takes on a completely different, much harsher tone.  Having been rather rudely bitten by Deer Flies on one of our days out, it prompts this week's blog hop.  Enjoy one another's post, let others know about the hop, and go fish.

Welcome to the weekly Phish Your Fish blog hop.  Yes, we are in the Gulf of Mexico fishing for Louisiana Redfish (and anything else that likes our flies), but that doesn't mean the blog hop is on vacation.  Come join the fun and let others know about our stories.

Posted by flyfshrgrl at 12:00 AM No comments: