Well, our first trip to Broken Bow after the flood produced mixed feelings.  Always seeking fish and fishing excitement, we went north to catch the first fish of the year.  Accompanied by our dear friends Dawn and Jason, it was FishOn the fly time.  Cody likes Broken Bow fishing; I, however, do not fish the area well, and I am not sure why.  I stocked up with flies from TailWaters Fly Fishing to add to my trout box and adopted a "can catch fish" attitude. 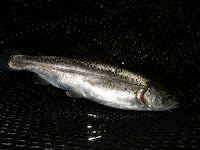 We checked in to our Pine Meadows Cabin, now minus the teepee, cranked the temp to 104 degrees on the hot tub, rigged up our nymphing rods, and headed to Lost Creek for about an hour of fishing.  Cody nymphed below the bridge getting several hits.  Unfortunately, my favorite rock, on which I have always stood, and the only place I have ever caught fish in Lost Creek, no longer exists.  Great.  I skipped over the next hole, since a dad and son occupied it, and began to nymph my hot pink San Juan Worm with a Flashback Hare's Ear dropper.  Lo and Behold, I caught a fish on my third drift!  I could not believe it, and while I wanted to shout out to Cody Bell, I refrained.  I figured I caught the last fish of the year, but out of at least 10 trips to Broken Bow, this was about my seventh fish ever to catch.  Sad face for Cody, though; no fish Thursday night.  We met up with Dawn and Jason, ate, enjoyed the hot tub, and hit the sack to get ready for Friday's fishing. 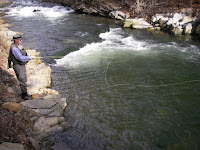 Oh, the Fishing Gods looked down on us and laughed heartily!  We fished lower Spillway Creek with absolutely no luck.  I had one hit.  Cody spotted a hole that actually had fish, but the spillway just upstream of the hole but a bend in the line that deterred a straight sink, and I was using a 150 grain sinking line on my 4#.  Cody came to the best conclusion, with the lower foot bridge gone, stocking trucks can no longer access farther upstream, and most of the fish are caught at Upper Spillway Creek at the dam's tailrace, so there seems to be few fish.  I know I did not see anybody's pole bent, not even the bait chunkers using PowerBait.  There are beautiful pools, lots of fast-moving water, but oh-so-few fish.  We did learn Dawn hooked up with a fish--Dawn's first nymphed fish, and that was the catch-of-the-day.

Not to let the lack of fish deter us, Cody previously made dinner reservations for Abendigo's.  We dressed up, enjoyed one another's company, reveled in the delicious six course meal--filet and snow crab legs.  Cody Mood even ate the third course's Peach Rum Sorbet; yes, you read that correctly, Cody Mood Bell III ate a fruit! It was back to the cabin for some hot tub, champagne, wine, and ginger ale, and the fishing video EASTERN RISES.  Oh, yes, Kamchatka is still on my want list, right behind #1 Mongolia.  I would love to spin some deer hair and create some mouse patterns for eastern Russia!  With Auld Lang Synes exchanged, it was off to bed for the "first fish of the new year."  For us, catching that first fish of the year means good fishing luck for the rest of the year.  The pressure was on. 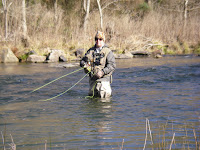 Cold Hole, Lost Creek, and the start of Evening Hole changed dramatically after the flood.  Personally, I am not a fan of the new Lost Creek, especially how it empties into Spillway Creek.  I used to love to fish the end run of Lost Creek, and work my way back up the Canyon to the relatively quite Cold Hole.  Auld Lang Syne to Lost Creek, the Cold Hole, and fishing along the Canyon.  Evening Hole's beginnings are a nice improvment--good gravel bars and a nice run with trout holding.  Unfortunately, those are some wise trout.  I watched many people fish, and regardless of what they threw, the fish, ever-so-politely may they be, gracefully slid out of the way of the fly and returned to their spot after it/they passed by.

Getting frustrated, I decided the one place where I could catch fish--on a dry fly at that--is what we affectionately call Jonathan's hole (after DFF member and friend Jonathan Gonzalez, because he can always catch fish there), which is the second bridge below Sid's and just upstream from the Powerhouse.  I was giving up on the Spillway Creek,/Lost Creek/Evening Hole area, I left Cody a note on a napkin and started walking.  I made it to the Evening Hole bridge, and no one was fishing below it, it looked good, so I thought I would give it a few quick casts and be on my way.  What a time to pick a spot.  Using my 4# with 150 grain sinking line, I tied on one of Cody's GirlieBuggers.  Third cast--FishOn, baby.  Oh, yeah, the curse was off my back.  Hyped from my catch, I cast again, and bigger FishOn!  Rainbow had its photo snapped, but my macro feature focuses on the background, but the fish was landed.  Two more casts and third FishOn!  Oh, yeah, an excellent detour.  I left the hole because dusk emerged, temps dropped, and my fingers were so red and numb, I kept having to look at them to see if they were there.  I wish I had caught a fourth, then I could say one for each of us, and the day was good for all, but I didn't.  We went in to Broken Bow to eat, watched TCU win, and planned strategy for Sunday.  Still suffering from cold, I needed the hot tub, and then, I retired early.  Dawn challenged us to be on the water before the sun to maximize our time. 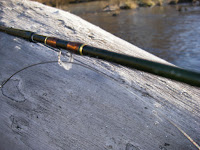 I think it was a first for me to fish in 26 degree weather; I hope it is my last.  We made it to Jonathan's Hole, and boy was I shocked.  Usually, the hole's depth is at my stomach.  It was at my shin, but I was determined to fish bridge to riffles.  What a waste of time.  I saw no fish, had no hits, and not only did I end up with ice in my guides, my line froze to my tip.  I had no place to set my butt end, so I tried to keep the reel out of the water while I wrangled with my line.  The rod is 8'6", and I failed.  My reel got wet, so about every second cast the line and reel froze.  To remove ice in the guides and to defrost my reel and line, I had to dunk my rod in the water.  I eventually gave up, left Cody a note, and hiked to Sid's and fished below the bridge there. No luck, either, but I did see someone pull out a fish just above the bridge.  Hope springs...yeah, well, not that far.  A park ranger saw me walking back and gave me a lift.  I had to hang my rod out the window; that was a first, but the guy was really nice and offered some fishing advice.

We visited Sid's for a while, broke for lunch at Sonic, and headed to the ReReg Dam.  Cody talked us in to fishing Presbyterian Falls, where I lost my GirlieBugger.  After an hour in the area, we moved up to the dam.  The Jancos were also fishing Broken Bow, and I fished opposite them along the chute.  Jack hooked up with a nice 12" rainbow; I had no luck.  Oh, I was also standing on top of a boulder about 7 feet above the water, so when Jason hooked up with his fish, I was able to watch it all.  Jason will stay with one spot until he angers the fish who gives up and bites the fly just so he can hold in peace.  Cody and I each fished the dam pool with zero luck.  We eventually had to leave because it was time to check-out of the cabins and head home.

I felt really badly for Cody.  Never, and I mean never, have we ever fished any where that he did not catch a fish.  I guess, as sad as it is, there is a first time for every thing.  Due to the nature of the fishing and the coldness of the season, we are not going to the LMFRF One-Fly.

Posted by flyfshrgrl at 8:48 PM No comments: