Fall Fishing in the Hill Country

The third week in October finds Cody and I and many DFFers in Junction, Texas.  For nine years, the Fredericksburg Fly Fishers have hosted the event Oktoberfisch on the Llano and South Llano Rivers.  I have attended seven of the nine and loved every one, including this year’s event.

The river was characteristically different this year.  I think the 2011 drought affected the South Llano more this year than last.  The river flowed well at both 377 crossings, but farther downstream at Boone’s Crossing, it was a little low, compared to years' past.  The levels seemed a little higher than last year at the South Llano River State Park crossing, because it would have been difficult to float under the bridge on the upriver side.  However, from the state park to Shady Morgan Campground (now owned by the Meachems), the river ran low and narrow. 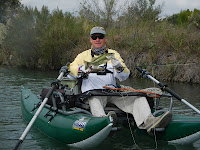 I did not see the usual carp cruising the riverbed, nor did I spot any of the big bass I have seen and  discussed in the Jul/Aug 2008 Southwest Fly Fishing.  There were very few deep pools.  Typically deep, swift chutes did not exist, including last year’s spot where I caught a ¾ pound Rio Grande Perch.  The downed tree near where the pipes have been exposed by calving banks did not hold the fish it held in years’ past.  One year, Cody cast four times and caught four species on an amber Bonefish Bitter.  We saw many, very small Bluegill, but that was it.  There were more and larger downed trees that must have succumbed to the drought and died resting in the river.  I thought these would be a haven to fish, but I guess the acidic content of the decaying trees have affected the nearby waters.  The fishing was good for the smaller species, and Cody did catch a nice Largemouth Bass on his newly finished 3# rod.  Cody also hammered the Rio Grande Perch, even naming one area the RG Tree!  We ate the sirloin supper cooked by the Limestone FFA men, enjoyed cake, won the two raffle items we wanted to win, and enjoyed the company of many friends. 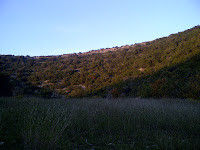 Having taken a long weekend, Cody and I left the South Llano and headed south to Lost Maples SNA.  Thankfully, we had booked our RV spot many months ago.  While the maples aren’t their gorgeous reds, yet, they have begun changing colors and are beautiful.  We hiked along the East Trail back to the ponds and fished there, catching Largemouth Bass, Channel Catfish, and Bluegills.  The canyon was bathed in the dusk light and fall has definitely arrived in the Sabinal Canyon. 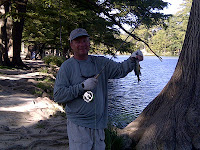 Cody had never been to Garner State Park, just 16 miles southwest as the crow flies, so we drove over to spend a nice day on the Rio Frio.  I was amazed at how few people there were.  I have seen this state park filled to capacity, and today, there were maybe 15 occupied spots!  First, we set out on a hike, a 360 foot ascent in .4 miles, to White Rock Cave and the nearby park geocache.  The cave was cool but humid.  After finding the cache, we headed back to the bank of the Frio, picnicked under old, beautiful Cypress trees, and with gorgeous, green water clarity similar to saltwater colors, we spotted Largemouth Bass 130 feet away. 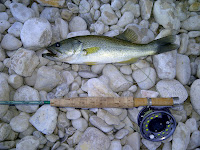 After lunch, we fished the river below the dam hiding behind the Cypress trees.  The fishing was difficult, so we eventually packed up and moved to other areas of the park.  Cody picked a great spot and we caught all kinds of Redbreast Sunfish and Largemouth Bass.  Having fished that spot thoroughly, we moved to a new area suggested by park staff.  We found a gorgeous, small waterfall, deep pools, and fish.  We fished until dusk before leaving the park.  We ate at Mama Chloe’s in Leakey and made it back to Lost Maples. 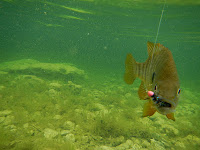 Having not given the Sabinal River in Lost Maples its proper respect, we chose to fish its pools near the campground and entrance finding Largemouth Bass, Catfish, and spawning Bluegills and Redbreast Sunfish.  We fished topwater flies and Cody and GirlieBuggers all with fun and success.  We checked out and headed for home, leaving the Hill Country behind until next fall.
Posted by flyfshrgrl at 11:10 PM 2 comments: