Ode to My Waders 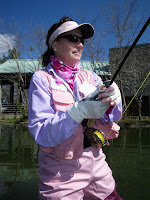 For as long as I have been fishing, I have fished in pink waders.  Yes, they are a little different, but they aren't the ordinary, dull khaki or gray, and when fly fishers queue up along the bank like sardines in a can, you know where I am.  Cody likes it that I'm easy for him to spot.  So it was with great sadness that I had to put the pinkies aside.  The inseams along knees had worn thin, and my trademark waders leaked beyond repair.
I have been looking for a fanny pack.  I liked the older Simms version that came in orange, blue, lime, or gray, but now, no one has those, and everyone just offers an ugly, gray color.  When you're in a boat with a lot of other fly fishers, you want to be able to pick out your pack fairly easy.  I was discussing my conundrum with Sean at Orvis, and he told me about an on-line store called Recycled Waders, where they "turn leakers into keepers,  meaning they upcycle reclaimed breathable wader material to create fishing friendly products."

I liked the website and the products they offered, but I still looked around for the fanny pack that I wanted.  With my search ending up null, I decided to give Recycled Waders a go, and I am glad I did.  Patrick was really easy to work with, from my shipping the waders to Patrick in Colorado, to my receiving the finished product was all of three weeks, and I love my new Big Fanny Pack.  I can tell what part of my waders were used where, and the pack is going to be greats for flats fishing, especially.  There was enough material left over, that I ordered their original 'Nook Sack for my fly boxes.  Louisiana Redfishing will be their debut.

Even if purchasing a product is not on the agenda, Recycled Waders glagdly accepts donations of anyone's retired, breathable waders, and they recommend Ecologic Designs for upcycling neoprene waders.

There are a lot of great blogs about fly fishing.  To help fly fishing bloggers find one another, I am creating a fly fishing blog hop titled Phish Your Fish beginning on Tuesday and occurring weekly.  To particiapte you will need to do three things:
The purpose is to connect more fly fishers with one another, so share a little comment on a topic or two you like, go fish, and blog it.
Posted by flyfshrgrl at 1:36 AM No comments:

Cody and I made a trip to Lake Fork to visit friends, and while there, we fished, of course.  We stayed in the Little Caney Arm area, because traveling around this lake with all the exposed stumps is a little on the reckless side.  Cody and I fished the Fly Fishing Bass Tournament two months ago, and while the lake levels were down in May, they are really low, now.  I took a photo standing on Diane & Richard Blair's dock, which has no water under it, by the way.  Typically, both their dock and Annie & Ray's dock has 4 1/2 - 5 feet under it.  Well, the grass doth grow, and the shoreline begins about three feet from the end of each dock!


Lake Fork is known for its trophy, share lunker Largemouth Bass, and Cody and I hoped we'd catch at least one, especially in the evening on poppers or using a good, sinking line.  We fished about three hours total, and caught three fish--two Channel Catfish and one Bluegill.  Cody's Channel Cat jumped completely out of the water, and until we netted it, we both thought it was a bass.  I caught my two on an amber Bonefish Bitter while wade fishing, and Cody caught his on a CodyBugger from the boat at dusk.  The lack of rain is not only affecting the humans, but the fish, too.  Oh, rain, rain please come, today!
Posted by flyfshrgrl at 7:19 PM No comments:

The DFF hosted Kevin Hutchison in '09 and '11.  I hear Kevin's presentation every time I attend the Dr. Ed Rizzolo Fly Tying Festival in Houston.  For Cody's 50th birthday, I gave him an autographed copy of Hutchison's Fly Fishing the Texas Hill Country.  So at the Gulf Coast's Conclave Auction, it was a given that I was going to bid on Kevin's guided trip, and boy was I glad that Andy Niland decided to bow out when he did, because I had bid my limit.

Winning the auction was the easy step; the difficult part was planning where to go fishing in the Texas Hill Country during one of the worst summer's since 1980.  The Blanco is dry.  The Pedernales is dry.  The Llano is dry, and the South Llano is so low, it would be a dry "wading" trip with hysterical whoops, because we caught a fish in the first four hours.  (The South Llano's drought conditions also have me worrying about Oktoberfisch!)  The San Marcos is spring-fed, so it has water, even though the levels are lower than usual for a Texas summer; so, the San Marcos River it was.

Cody and I checked out the redesign of the river at Rio Vista Park, and the water flows looked good.  We drove farther downstream to San Marcos Retreat (just down from Pecan Park RV).  The water level was down, but the water was clear and definitely moving.  Then, we drove to Shady Grove Campground at FM 1979 just outside Martindale, where we met up with Kevin.  After going over the day's plans, we hopped in the boat.  Kevin guided us in a 2-man Pontoon, that he rowed similar to a drift boat.

"The left is in play," meant we were fishing the left bank, "Now, the right is in play," meant we were changing banks.  The boat seats swivel 360 degrees, so it was easy to cast wherever we were supposed to cast.  We fished riffles for Guadalupe Bass, tree and foliage structure for Largemouth, Smallies, and Sunfish, and deeper, dead pools for Rio Grande Perch, and we had a blast!  Cody and I both used a 2# floating and 4# sinking.  Our fly selection range varied, and we fished Cody's GirlieBugger and CodyBugger, Kevin's Swamp Monster and Bass Candy, Mike Verduin's Cap Spider, and a chartreuse and white Clouser.  We fished deep in the water column to just under a foot, but nothing floating.

The day's trip lasted seven hours and began at FM 1979 and ended at FM 1977.  Only once did we have to pull the boat for about two feet, and that was because there were three people in the boat, which was steered far in to the shallow shore to avoid a low hanging tree.  We broke for a wonderful shoreside smorgasborg of sandwiches, chips, fruit, and delicious brownies.  Kevin has the neatest table service gadgets to make a shore lunch seem like a five-star, Top Chef restaurant.  The fishing was just as good after lunch as it was before.

We caught 22 Bluegills, Longears, Redbreasts, one Guadalupe Bass, six Rio Grande Perch, and a dozen Laregmouth Bass.  The greatest catch of the day was Cody's 3 1/4 pound Largemouth on his 2# rod.  Casting a Swamp Monster to the shallow shore in moderate vegetation, Cody stripped a slow retrieve to keep the fly on the bottom, saw the fish and pulled the retrieve within its sight, and watched that Largemouth hammer the fly.  Fine fighting fun!


For me, it was all about catching the Rio Grande Perch.  I love those fish absolutely.  I also learned about the sores they develop on their bodies.  As they mature, their mucus glands slow their production, and because the cichlids stay in slow-moving water, non-harmful bacteria attach themselves to the cichlids.  Also, the Rio Grande Perch mate for life.

Cody and I had a great day fishing with Kevin, and that was before he gave each of us the complimentary t-shirt and aluminum water bottles.  We learned a lot, caught many fish, and spent the evening reminiscing and eating ribs at Black's BBQ in Lockhart.  A fine day, indeed, and one that we will repeat.
Posted by flyfshrgrl at 11:41 PM No comments: