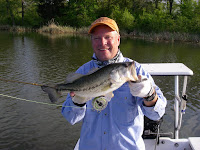 Not wanting to get "out of fishing shape," Cody and I participated in the DFF's club outing to Loy Lake 10 April 2010.  Being the cold-temp sissy that I am, I talked Cody in to waiting to fish in the afternoon, warmer temperatures.  It paid off--bluegill, white crappie, green sunfish, redear sunfish, fingerling largemouth bass, grass carp, and two 2+ lb. largemouths.  Black was the color for the day, and with the exception of a bluegill on a Miss Prissy popper, all were caught on the CodyBugger! 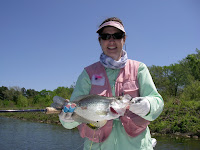 The waters were crystal clear, a good thing, since catching the cursed carp caused my archaic BlackBerry to fall in the lake, where it remained for approximately seven minutes.  Having to strip down to my sportsbra and skivvies, I entered the four foot deep (cold) water, slid my left foot under the phone, right foot on top, pulled my legs up, and grabbed the phone, which was vibrating madly.  Cody immediately took the battery and SIM card out, and we shook, dried the phone, and let it bake in the sun inside the car.  All our efforts worked and so does the phone.  Pay homage to the BlackBerry, 2006!  I dried off, doned all of my fishing clothes, and fished on!  The big bass came afterwards, so a good decision to fishon!
Posted by flyfshrgrl at 8:49 PM