Cody wanted to me to enjoy my week's Fall Break, so he booked a Lake Texoma trip with Guide Steve Hollensed of Flywater Angling Adventures.  Originally planned for Thursday, the high winds, tall white caps, and crazy weather pushed our trip back a day to Friday, which turned out to be a beautiful, clear blue sky, and almost no wind day.  Those conditions meant we had to be on top of our game, because the fish could see us and our zinging fly lines long before we saw them.  Choosing to fish with our 7# rods loaded with Generation 3 Class V Streamer Stripper lines, we cast to rocky shorelines and stripped our lines in quickly, then pausing briefly to let our flies sink, we resumed stripping quickly, and cast again.  Our retrieves imitated the abundance of bait fish present.  Our numbers of fish were not high but the quality of fish equaled personal bests on many catches.

We set out on the water prior to sunrise and watched a beautiful morning dawn.  Heading to where Osprey were resting in trees, I cast to a shoreline lined with big rocks.  Steve told us we were going to move after this cast, so I cast towards a small tree about three feet prior to the point, and on the second strip, a fish hammered the chartreuse and white Half and Half Fly.  Then, the fish leapt completely out of the water, and Steve and Cody were hollering, "Whoa, Smallmouth!  Smallmouth!" and "That's a nice Smallmouth!"  "C'mon, Miss Julia, bring her in."  As it neared the boat, the fish headed under the boat by the motor.  At one point, I thought I lost the fish because the line slacked as it swam back toward shore, but another strip eliminated the slack, and I reeled in the excess line.  The leader was at my tip guide, and the fish swam alongside the boat avoiding the net.  While the fight lasted a little over two minutes, when it kept swimming away from the net, I thought I wasn't going to land the largest Smallmouth I had ever caught.  However, Steve netted it, and Cody helped me weigh, 2 1/2 pounds, measure, 17 1/4 inches long, and take my picture with it before releasing that beautiful fish back to its home waters. 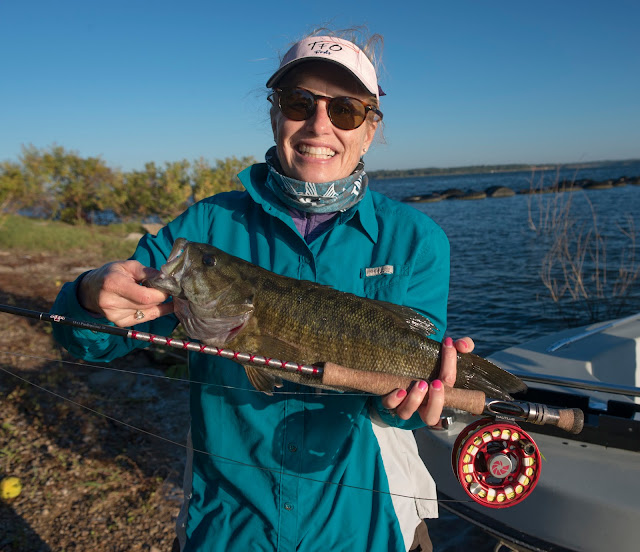 Cody began fishing after an enjoyable lunch.  Using a fly Cody learned  to tye from Jen Ripple during her September visit to the Texas IFFF Convention and the Dallas Fly Fishers meeting, Cody caught his personal best Smallmouth and Striper.  We were fishing a rocky embankment, and Cody cast his fly about two inches in front of the rocks.  The fly was barely in the water when his line went tight.  About  two feet from the boat, the fish surfaced just enough for us to see its back so we could identify it as not a Striper.  A few more strips, and Cody's rod tip doubled over.  Cody worked his rod tip under the boat, as the fish swam from one side to the other.  Once back on the shore side of the boat, Cody stripped the fish in, and Steve netted another large Smallmouth.  Cody's fish weighed 2 1/4 pounds but was 21 1/4 inches long.  I really don't know why the fish was skinny, because it was healthy and fought hard.  I enjoyed snapping his photo with the longest Smallmouth I had ever seen! 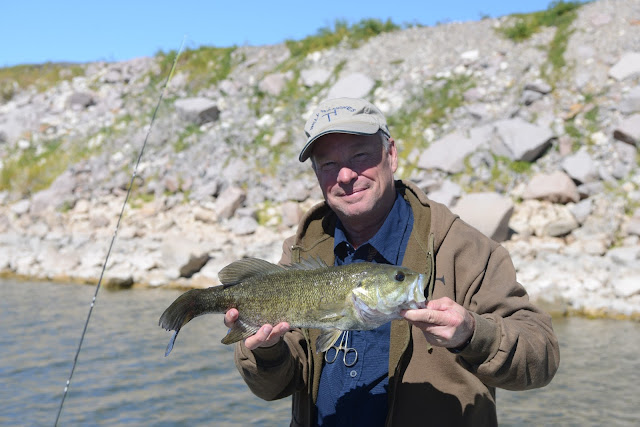 With waters as smooth as glass, we headed back to a previously fished shoreline.  Graciously, Cody let me have the front of the boat.  Continuing to cast his shad-patterned fly towards the shore while an Osprey watched, Cody's line went tight about five feet from the shore.  Cody reeled, and the fish pulled line off, and Cody reeled and the fish fought back.  We knew Cody either had a Striper or a White Bass.  When he landed the fish, I thought that it was a Hybrid, but Steve told us since these landlocked Stripers don't have a wide gene pool variance, that sometimes their stripes are broken, so looking at the their tongue confirmed the fish identity as a Striper or Hybrid.  Cody's catch had a double tongue, so Cody caught a 4 1/4 pound Striper. 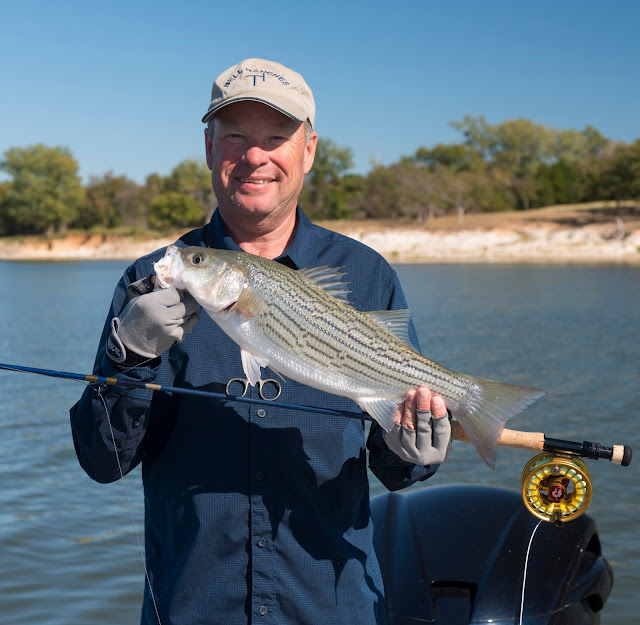 All-in-all, the day's totals were two Smallmouths, two White Bass, one Striper, and because the bait fish were so incredibly thick, five Threadfin Shad.  We also saw many Blue Heron, Osprey, including seeing one catch a fish and fly off with it, and a Bald Eagle.  We worked hard for our catches, and enjoyed a most beautiful Fall day on the water!
Posted by flyfshrgrl at 10:30 PM No comments:

Cody spent a part of Sunday flying his drone over the South Llano River, so we could see how the river has been changing since the 2010 heavy rains followed by the devastating 2011 drought and fire.  An area typically deemed as an easy, short float, the section of the South Llano River between the First and Second Road Crossings, had been a typical favorite section for day trippers and novices alike, as well as those who like to explore.  This section of river nestled between two different US 377 low water bridges is 1.4 miles in length and is identified by its locale on one's drive from Junction.  The Second Road Crossing is deemed the 0.0 mile put-in, but the First Road Crossing is more popular because it is the crossing closer to Junction, possesses easy access for cars to offload water craft, and provides easy watercraft launching areas.  Therefore, not as many river runners have experienced the South Llano's rapid changes over the past five years due to bypassing this tell-tale section.

In this section, clearly defined flood plains exist, banks and floodplains are storing water, both new-growth trees and established trees are present as well as healthy riparian grasses and plants, and a number of features which provide roughness and channel obstructions so that additional energy dissipation and floodwater retention exists.

While river runners' acclimation to these changes may take some time, it is good to see the river recovering from such a devastating drought and 2008 and 2011 fires.

Posted by flyfshrgrl at 4:51 PM No comments:


Cody and I attended the Fredericksburg Fly Fishers 13th Annual Oktoberfisch Event, which was held at a new venue but still on the South Llano River.  We had the pleasure of RVing next door to our friends the Egglestons as well as being their Friday evening dinner guests.

Since the 2011 drought, this river has changed annually, but this is the most drastic change yet.  What was once a wide river with long deep pools with the occasional Class I and II rapids no longer exists.  Taking its place is a true, riparian corridor where a much narrower river has emerged.  Cody floated using his pontoon boat, and I floated in my kayak.  We each caught our fair share of species:  Redbreast Sunfish; a few Rio Grande Perch for each of us; Guadalupe Bass (the original State Fish of Texas); a few Largemouth Bass; a Smallmouth for Cody; and one Warmouth for me! One fish I had trouble recognizing and was a first catch for me, was a Largemouth Hybrid.  It took reading Steve Quinn's In-Fisherman August 2012 article, "Hybrid Black Bass" to figure it out. Additionally, the Rios that Cody caught had no sores, while the two I caught had those sores.  I can not remember what Kevin Hutchison told us about the Texas Cichlids and these sores, but I do remember him saying they were harmless and disappear on their own.  Going where the flows take our vessels, we had a great day on the water, launching at the South Llano River State Park and taking out at our campground, just upstream of the Loop 481 truss bridge.

For the Saturday night Event dinner, we opted not to buy raffle tickets but tried our luck on the float tube; unfortunately for us, the 8 of Clubs was the winner, and we held the 9 of Diamonds.  We enjoyed our long, beautiful, and fruitful day on the water, as well as seeing good, fly fishing friends. 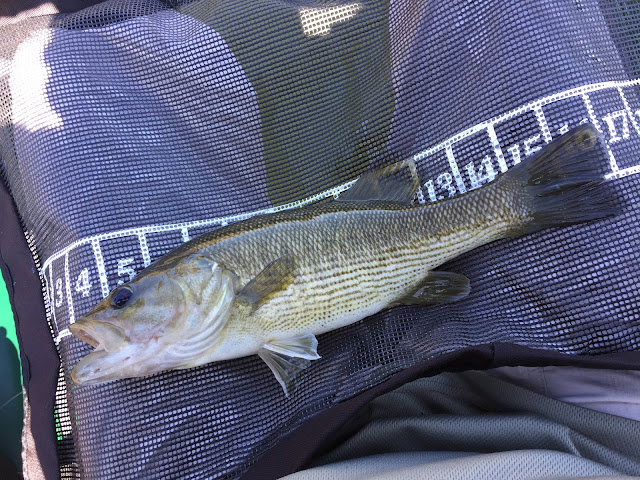 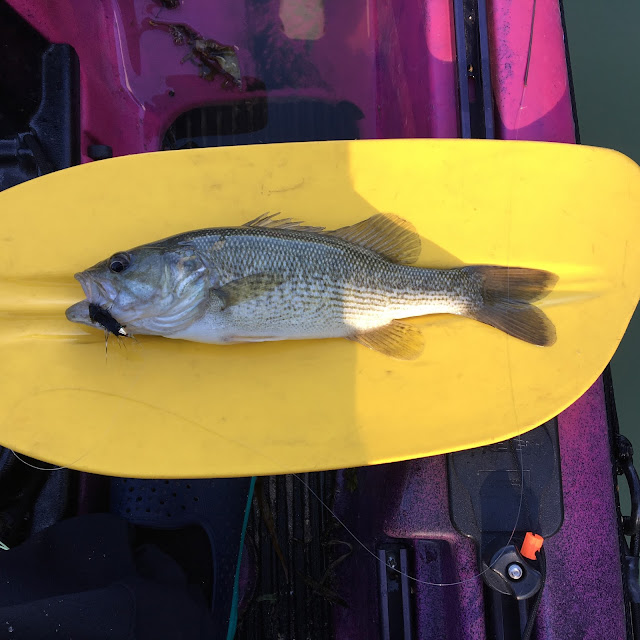 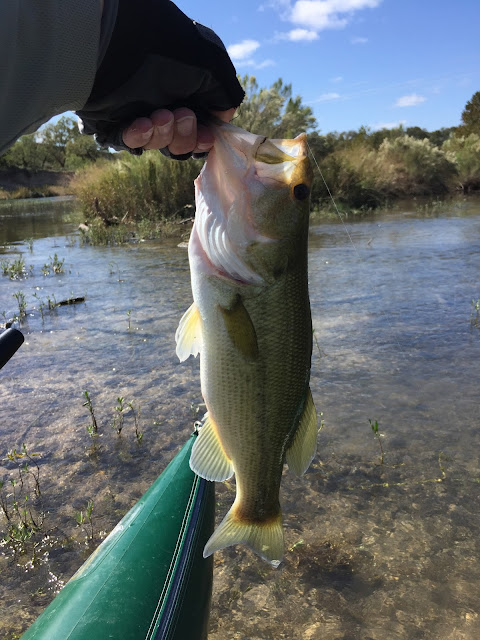 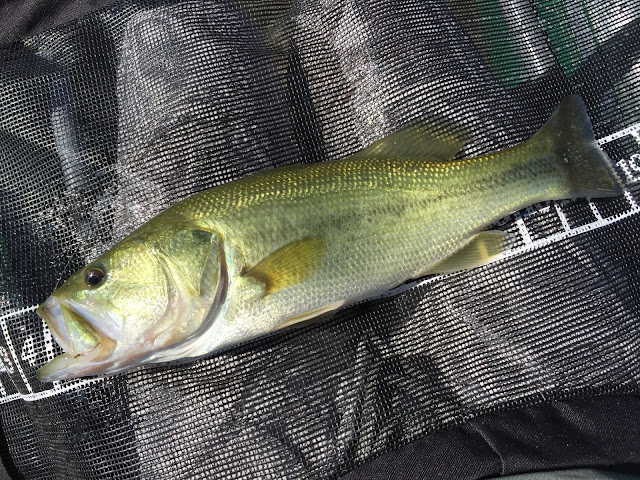 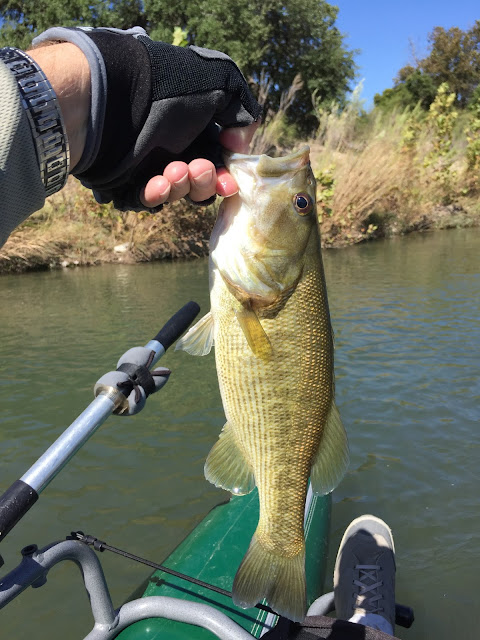 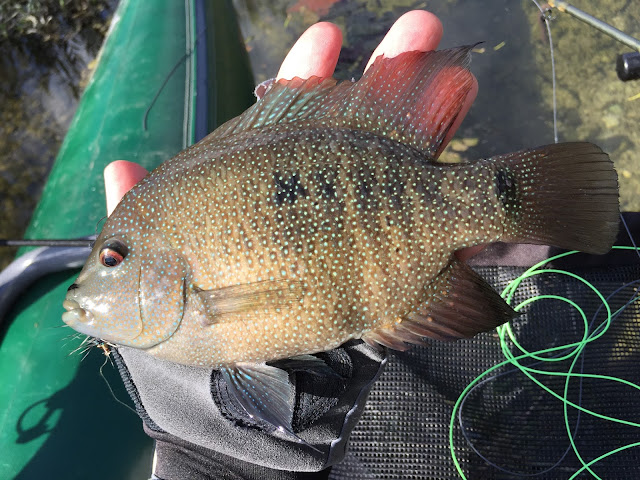 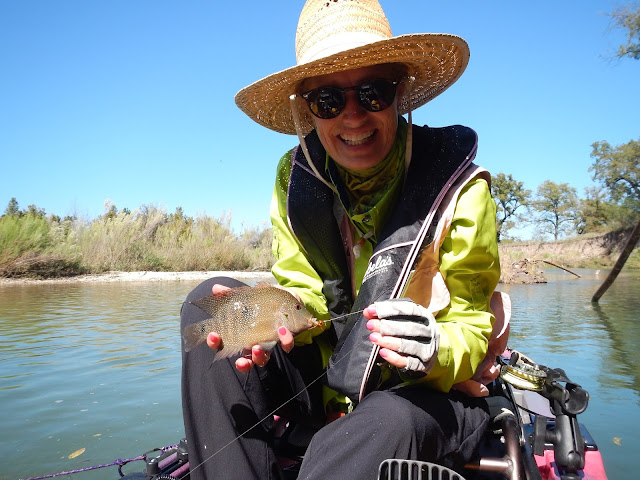 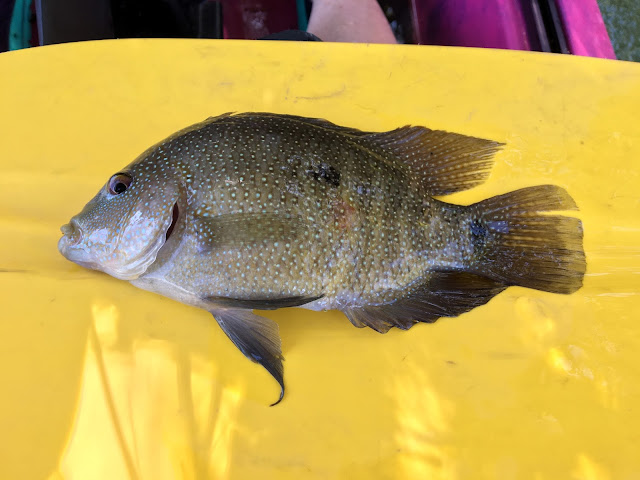 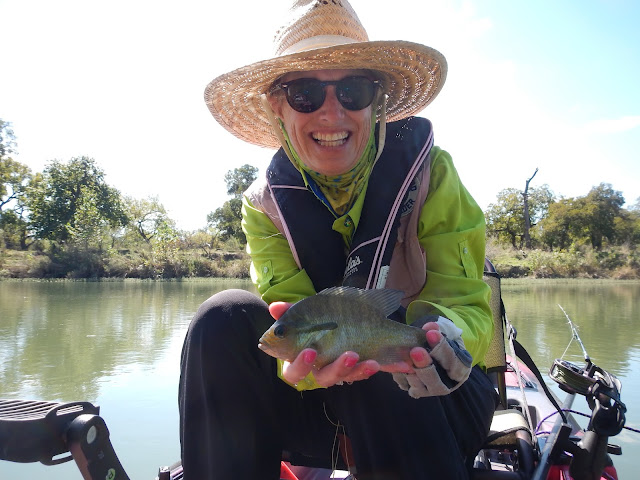 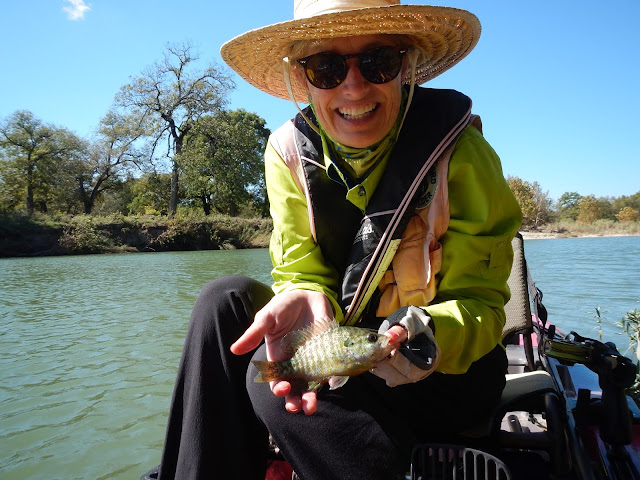 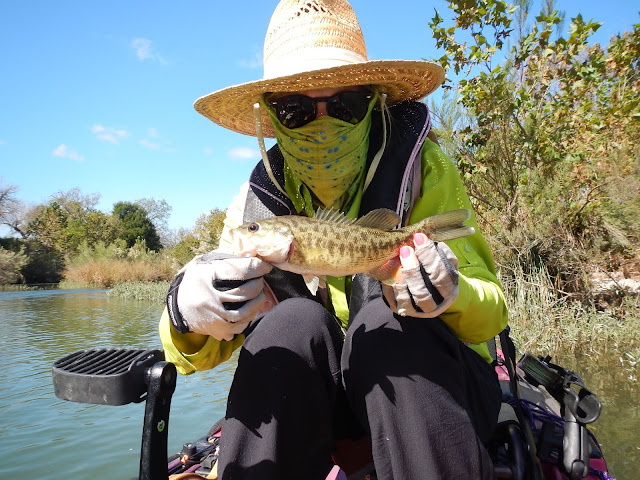 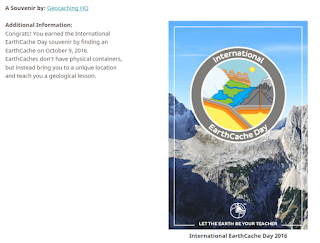 I submitted my 18 page Master's Thesis paper on my practicum project two days early, so I decided I would go fly fishing and geocaching, as today was International EarthCache Day.  I found the perfect spot in Fort Worth on the Trinity River alongside Hulen Street south of I-30 and north of I-20.  The EarthCache, Craving Sea Levelness, brought me to a natural weir along the Trinity Trails,
N 32° 42.866 W 097° 23.272, so access was very easy.  I fished my floating 2# and sinking 5# below the weir and landed Green Sunfish, a Channel Catfish, a Spotted Bass, and foul hooked a Pumpkinseed Sunfish.  The fish aggressively hit the flies, rust-colored crawfish, a beadchain black and orange crawfish, and the GirlieBugger, and there were numerous hits from small, healthy fingerlings.  I loved the Earth Science caching and fly fishing treat, and if I could have convinced Cody to join me, the day would have been perfect!

Posted by flyfshrgrl at 9:47 PM No comments: