Bonham State Park again played marvelous host to a fly tying bonanza, and Mother Nature graced us with splendid weather.  The Red River Fly Fishers, looking smashing in their wonderful club shirts, created a great combination for a get-together with a bunch of fly fishing fanatics.  We casted TFO rods, we watched one another's tying tricks and tips, we ate like royalty, and enjoyed the raffle.  Cody and I want one of Mr. Pope's Spey rods, but the TFO-rod-of-your-choice-auction item slipped through our hands yet again.  However, the urban fishing trip with Les Jackson did not.  I am really excited about that trip, because as a child, I grew up in Arlington, ruining more clothes from the mud and brambles and water of Rush Creek.  So, to see it as an adult and to fish it with more knowledge is going to be a pleasant treat.  I can not tell who is more excited about this trip, Les, because he is a true, ultra-light fly fisherman and loves sharing this urban oasis, or me, because I am revisiting old haunts.  Either way, it will be a fantastic day.

With Ovechkin watching, Cody cranked out some wonderful CodyBuggers and GirlieBuggers; afterall, we  are getting ready for our annual winter and early spring treks to fish Fort Parker's Lake Springfield from our float tubes.  In addition to those signature flies, Cody tyed some very flashy, minnow-esque flies that I can not wait to see in action.  Even though I have never seen Cody tye these flies, I loved their profile.  Cody said Rob Woodruff gave them to Cody for White Bass.  Cody has caught large Rainbows with them as well. 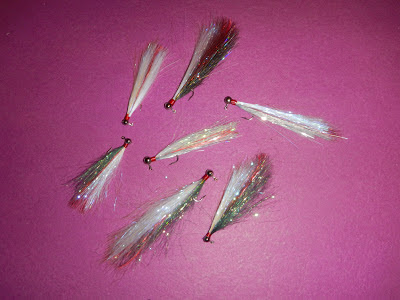 Cody and I's meal contribution was a pot roast.  Of course, potatoes have to be included, so as I was slicing those little reds, I sliced my thumb (no blood got onto the potatoes), and after 30 minutes of bleeding, I asked the park office for a band-aid.  They graciously gave me three, and while I needed that band-aid, it did not help with my fly tying!  I had decided beforehand that I was going to tye some more deer hair flies, big, chunky deer-hair flies.   Lately, I have really been dreaming of Mongolia, the Ur River, and Taimen.  So, with band-aid wrapped around my thumb, I tyed a big, fat mouse.  (I wonder if the scent of blood on the deer hair makes the fly illegal?  I wonder if the blood scent will still be there by the time I make it to Mongolia?)  I probably can not keep it "new" and will fish it at Lake Springfield or Amistad, but maybe I can.  (For me, they take a long time to tye, so it's not like I'll get into our tying room and crank one out in 30 minutes.) 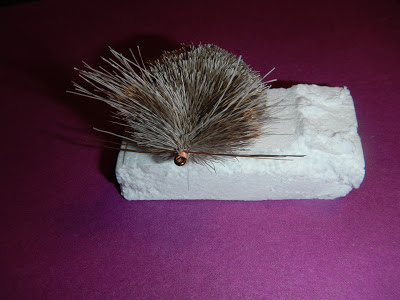 The absolute best thing about this year's Red River Rendezvous?  Our dear friend Jerry Hamon was there, looking handsome and healthy!

Posted by flyfshrgrl at 8:08 PM No comments:

Fly Fishing in the New Year 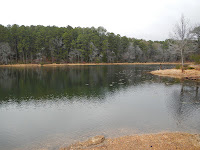 Cody and I decided for our New Year's fly fishing trip we would do a staycation.  We have some potentially  big trips in the works for later this year, so we wanted to stay closer to home.  I also wanted to target a new-for-me species, so we chose to camp four days at Daingerfield State Park and chased Chain Pickerel! 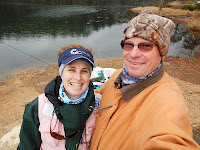 COLD and OVERCAST and RAINY!  Two of those make for excellent conditions to chase Chain Pickerel; unfortunately, the rain delayed our leaving for Daingerfield and kept us off the water our first day.  No matter; we had fun ringing in the New Year in our little warm and toasty RV playing board games and listening to the fireworks (and gun play) of others. 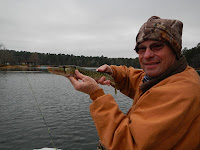 In choosing Daingerfield SP, I searched for how to fish for Chain Pickerel in Texas and discovered only one article.  However, it is by Rob Woodruff, so there aren't many others that can compare.  We brought our paddle boat to scoot around the lake and headed to a spot near our campground.  Cody had caught the toothy critters in this area years previously, so armed with 3 and 4 weight rods with floating lines and poppers, we set out to see what the waters held this New Year's day.  It didn't take long for Cody Bell to have Chain Pickerel On! either.  Cody used an orange, chartreuse, and yellow popper that just delighted the fish.  I had a couple of hits but no catches.  My popper was chartreuse and black, and I think that not having that flash of orange and/or yellow made most of the difference.  Weed guards are a must, which is something I don't often say.  We fished the lily pads and downed trees close to the shoreline.  Sometimes those Pickerel were a hair too early or late in their hits, but watching them miss was a treat.  While we were cold at 39°F, the Chain Pickerel were aggressive in their takes and misses (for a brief video).

Due to even colder temperatures on Wednesday, we drove around East Texas visiting Atlanta and Caddo Lake State Parks for future fishing ideas.  We did fish the Lake O' The Pines tailrace for Yellow Bass, and while they were hitting topwater, neither Cody nor I could get a fish to take whatever fly we threw at them. 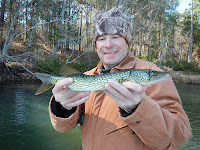 One of the niceties about camping at a Texas State Park, guests don't have to check out until 2:00 p.m.  Therefore, Cody and I enjoyed another morning of fishing.  Today, however, the sun shone gloriously without a cloud in the sky.  Nice for humans; bad for Pickerels.  Their aversion to warmth and light reminds me of the 1984 Gremlins--bright light, bright light.  Following Rob's advice, we headed for the dam because it was deep and shaded.  We chose sinking lines for our 4 and 5 weight rods, and Bam! Cody had FishOn! a really nice Chain Pickerel, too.  Something was wrong with one of its gills, but that didn't seem to deter this fish.  It even jumped once!  I love their markings, especially that eye stripe. 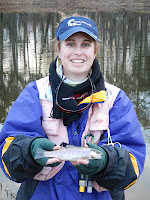 Sadly, it was time to go, but knowing that the Pickerel's spawning season is around February, I think we  might be back.  I really want to catch this species.  We detoured by Lake Bob Sandlin State Park and visited their recently stocked Trout Pond.  I needed to catch a fish.  It has been over 10 years since I had not caught a fish on New Year's day, and not only did I not catch one New Year's, I didn't catch a rather easy fish at Lake O' The Pines the second day of the year!  So, on the third day of the year, I finally caught some Rainbow Trout.  I had never been to the Trout Pond at Lake Bob Sandlin SP before now, and it is a really nice one, with plenty of area for fly fishers to cast.  We are looking forward to the last event of our "staycation"--attending the 2013 Cotton Bowl!  It has been a good break!
Posted by flyfshrgrl at 12:15 AM 1 comment: