Traveling to Cuba's Jardines De La Reina, Tarpon was a highly targeted species for Tailwaters' 11 fishing guests aboard the Avalon II and certainly the favored species among her guides.  For several of us, this beastly king was an accomplishment for our species bucket list, too. Fly fisherman Camilo regaled us with his first landed Tarpon on Thursday 25 June 2015.


On Monday of that week, Bill and Will Seals and Cody and I fished for the Kings of the Sea from the same, deep-water hole. Being the courteous and respectful friends that we are, we each took turns. Bill first, me second, Will third, Cody fourth, and then, we repeated the sharing again exactly as in the first time.  Those sea beasts were strong and beautiful.
As I had done on the first and only Tarpon I had ever hooked previously (April 2010), I again forgot to pay homage to the king, and so, my second  hooked Tarpon slid over into the "Jumped" category. However, Keko was an excellent and patient guide, and not too much time elapsed before I had my third-ever hook-up with this might warrior.  This time, I paid my respects, and I was allowed to land this Tarpon and two more Tuesday 21 June 2015.  They are exhausting creatures with which to do battle, and so I had to resign myself that three landed kings were all I could muster.

On Wednesday, Keko again put us on Tarpon.  Cody masterfully jumped five Tarpon that morning; two were on back-to-back, long and perfect casts.  As graceful as Cody's bow was, creating slack in his line, those stubborn Kings battled and won the jousts that day.

As others had done, I decided I wanted to catch Tarpon on the flats, so Keko tied on a beautiful purple and pink Tarpon Toad, spotted one Tarpon chasing sardines, and told me to cast at the 11:30 position.  It wasn't long before that 10# TFO TiCrX bent double.  It took a little longer to land this Tarpon, but landed it was.


In the afternoon, Cody decided to experiment with angle shots using his new GoPro Hero 4, and so he laid down on the bow in front of me and videoed and photographed my last Tarpon from beginning to end.  It was also my personal best, weighing a little more than 40 pounds and fighting for almost 25 minutes.  I was grateful for the 12# and calmer waters than Tuesday.  All-in-all, it was the Tarpon trip of a lifetime, as I jumped eight Tarpon and landed five of them. 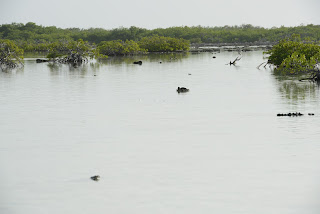 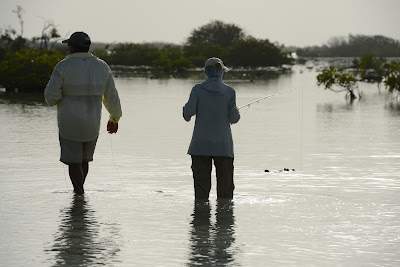 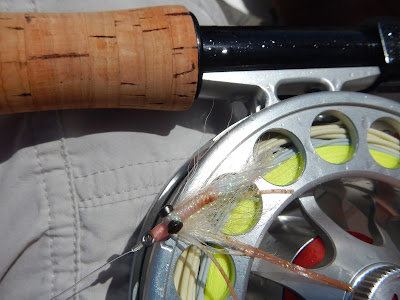 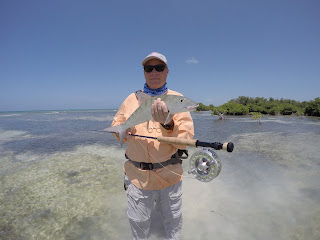 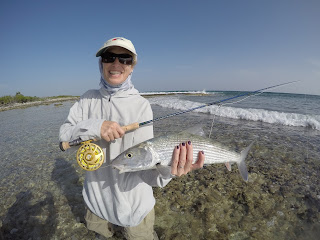 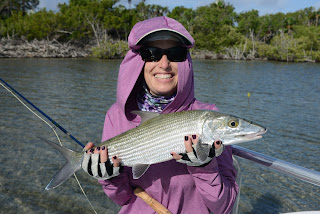 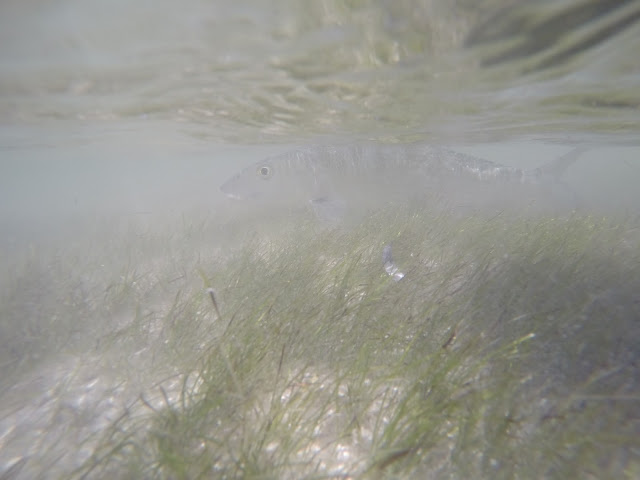 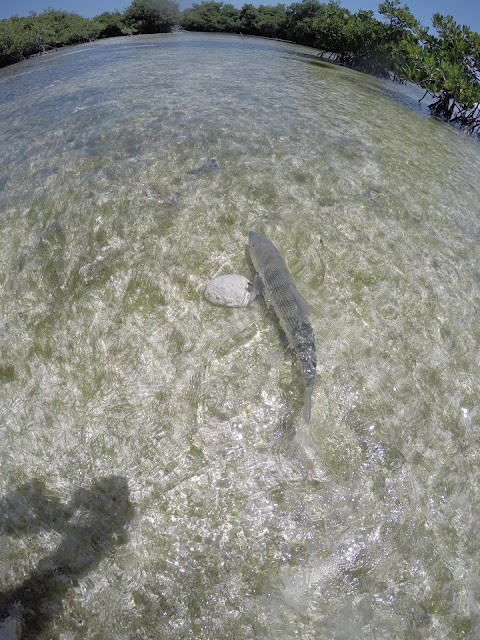 Posted by flyfshrgrl at 1:18 PM No comments: 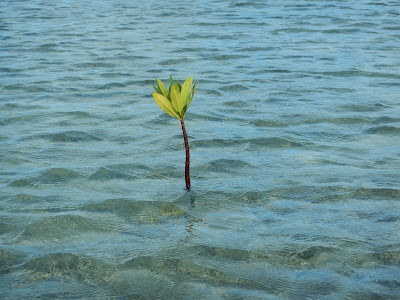 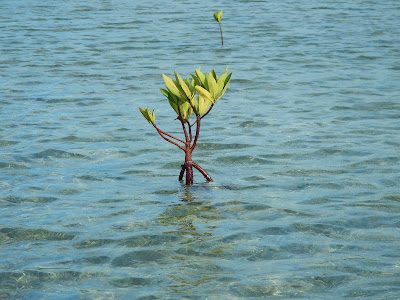 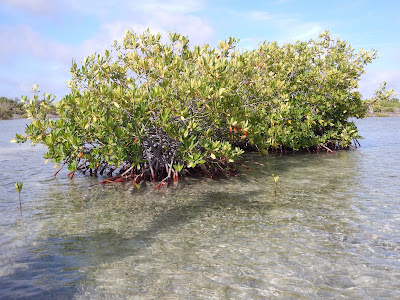 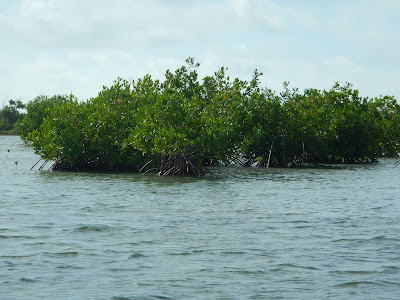 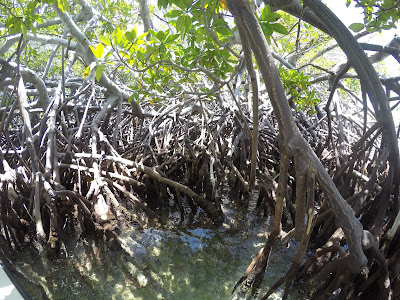 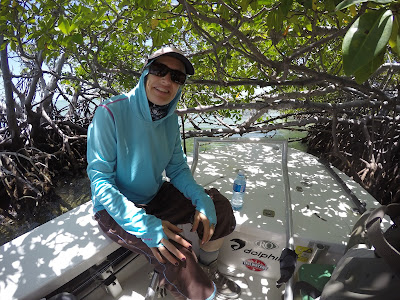 Posted by flyfshrgrl at 10:00 PM No comments:

Cody and I were celebrating the graduation of one of the Fab 5 with a trip to Hawai'i, so we set aside one day to fly fish.  We booked a guided trip with Captain Rick Lee out of Bonefish Hawaii.  We fished the east coast of Oahu at Kāneʽohe Bay between the Chinaman’s Hat and Kualoa Point, Oahu.  At the day’s start, we fished the morning after a full moon, so we were fishing a low, incoming Spring Tide.  Spotting Bones was difficult, since we fished over reefs instead of sandbars, but the winds were calm, clouds were minimal, temperatures excellent, and conditions were perfectly ideal. 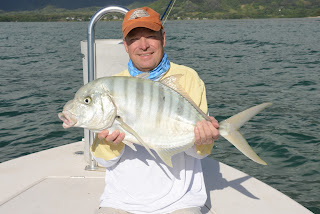 Cody fished first, and not long after rigging up, Cody casted to Bonefish.  Shrimp patterns were the fly of the day.  About 15 minutes in to fishing, Rick spotted a group of four Golden Trevally, and Cody casted about 35 feet.  Retrieving so that the shrimp fly jumped and fell, it was FishOn!  Cody hooked into one of the Goldens in no time and off that Trevally ran.  The Trevally’s first run simulated that of a Bonefish’s first run; however, the Trevally did not make subsequent Bonefish-esque runs.  It did however make short, deep runs, putting a good bend in Cody’s rod.  I had a blast watching Cody add to his species list!

Afterwards, it was my turn to fish, and being all of 5’2”, spotting Bones over the reef was next to impossible.  I just was not tall enough to get a good angle, so I listened to Rick and casted as close to where he was calling.  I got in a good cast and had three followers.  BAM! a nice Bonefish picked it up and ran—all 100’ of line and about 150’ of backing zinged off my reel quickly.  Rick said it was a good 10 pounder.  I reeled in most of the backing, when BAM! run #2 occurred, which was harder than the first run.  Having reeled to just where the fly line was coming in through the tip guide, the line snapped and landed at my feet.  That Bone cut the leader on a reef, leaving me about 3’.  Oh well, it was fun while it lasted.

Cody casted next, but as the tide was incoming, retrieves became a little more difficult, because the boat began to bump off the Bones.  What was a nice tight line, quickly became slack and retrieving produced no fly movement with the skiff bearing in on the schools and singles. 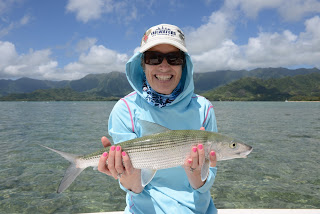 Frustrated, Cody let me fish, and while I never saw any fish to which I casted, I put the fly where Rick was telling me, and it paid off.  I landed a nice 6.5 pounder, whose turquoise-tipped fins, I never tire of seeing. 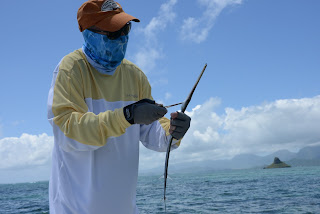 Cody fished next, and with the rising tides, the Bones were moving away lest they fall to their predators, which we saw no sharks.  Bored, Cody casted his line, and ended up hooking another species first, a Trumpetfish.  Due to its elongated mouth, the fly was taken out through its gills instead of its mouth.  Until Cody caught it, I had never seen one. 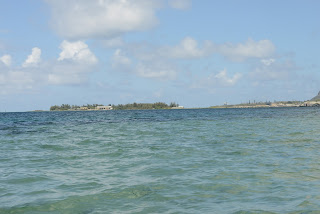 We ate anchored at Coconut Island, and watched the Navy boys practice touch-n-gos at The Marine Corps Air Station Kaneohe Bay.  High tide blew out the fishing for the rest of the day, as we never saw another Bonefish even though we moved over the sandbar flats.  The low Spring tides were definitely the productive waters for the day.  Having not fished since retiring, this was a good way to break-in to retirement fishing! 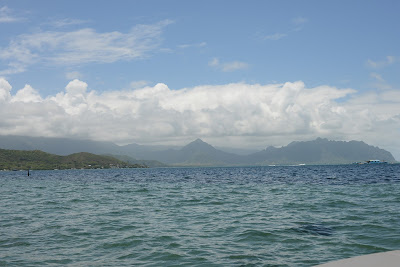