While Cody played golf, I set out for Colorado Bend State Park.  When I walked in the office, I looked towards the spot where the fishing info. board used to hang, and before I could look around in the tiny office for its new location, the park ranger said, "We took down the board.  We can no longer be considered a fishing destination.  Currently, the river is 12 feet low, and Lake Buchanan is 30 feet low.  We didn't even have a White Bass run this year."  My jaw slackened, and before I could ask, the ranger continued saying, "There is a sandbar downstream that runs the width of the river, shore-to-shore, and water's not moving downstream, and the fish can't run upstream."  I inquired about the other species above the sandbar, and he said, "What fish?"  I then inquired about why the water was so brown but did not receive a reply.  Spicewood Springs is looking healthy, though.

There are some positive changes involving the park.  They have updated all their signs--new waysides, new trail markers, a new entrance area with pull-out and covered-area signage, entrance welcome sign, and a gate.  Recent surveying and heavy road equipment indicate some road improvements; hopefully, the entrance road is going to be paved.  Lastly, as I was leaving, the ranger stated that the park was going to become an astronomy site hosting star parties in the near future.
Posted by flyfshrgrl at 10:24 PM 1 comment:

The Colorado with Kevin

Having previously fished with Kevin on the San Marcos, we decided to fish the Colorado in Bastrop.  The day was overcast, the winds were mild for the majority of the day, temps were in the upper 60's/lower 70s, the company was excellent, and the fishing fabulous! 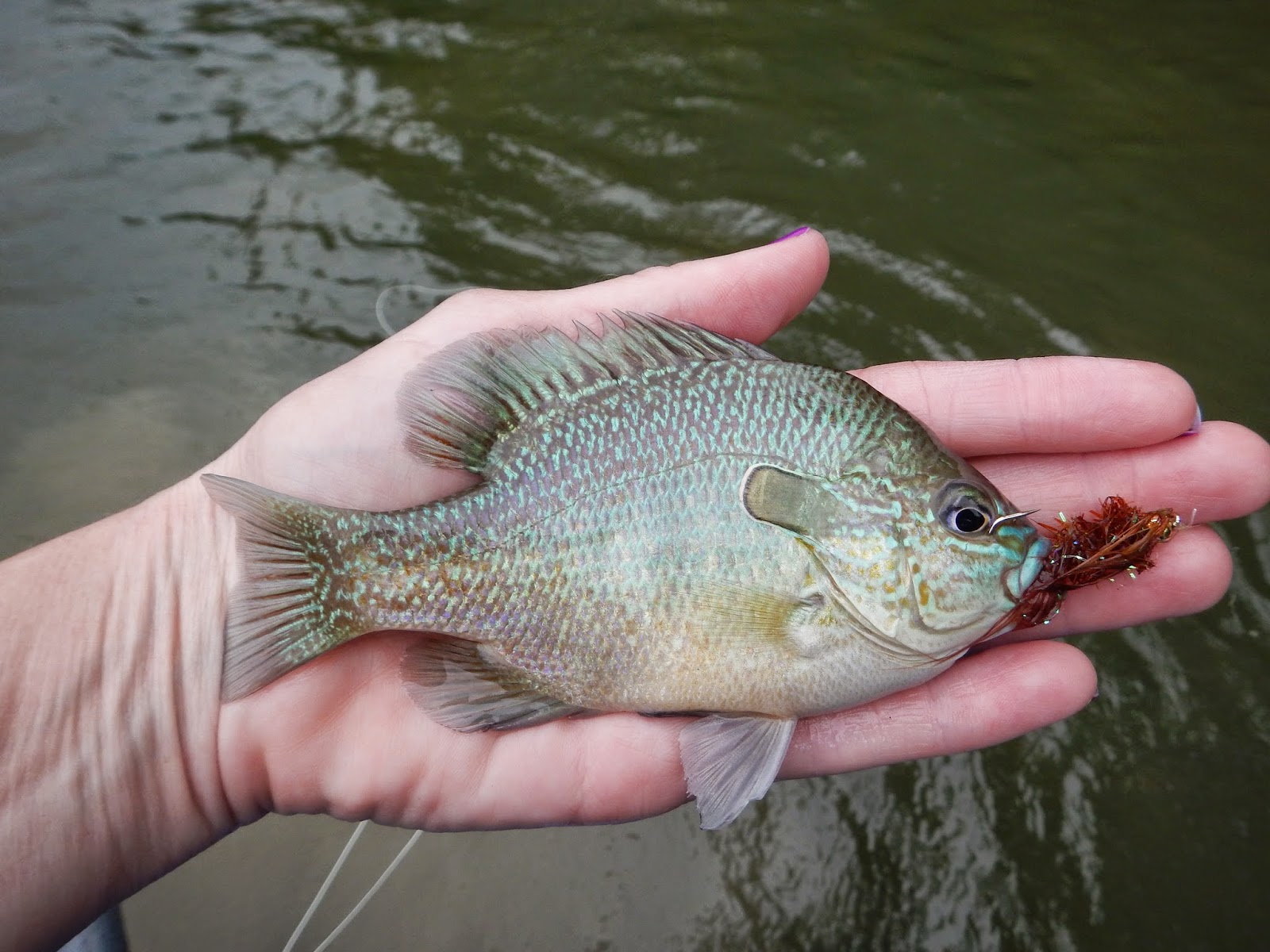 We fished top water flies in the morning, large, sub-surface flies mid-morning, top water after lunch, and sinking flies in the afternoon, and fish took everyone of the flies we offered.  We landed Largemouth Bass, Bluegill, and Guadalupe Bass.  One of the observations Kevin made was the number of ingested crawfish we'd seen in the fish we had caught, which was really cool to view.  I have heard Kevin talk many, many times, and he has always advocated looking inside the fish's mouth, because it's a great indicator as to what flies might be successful.  True to his teachings, Kevin tied on a rust-colored, beadhead fly for me, after Cody had been fishing it succesfully. Yield?--glorious results! 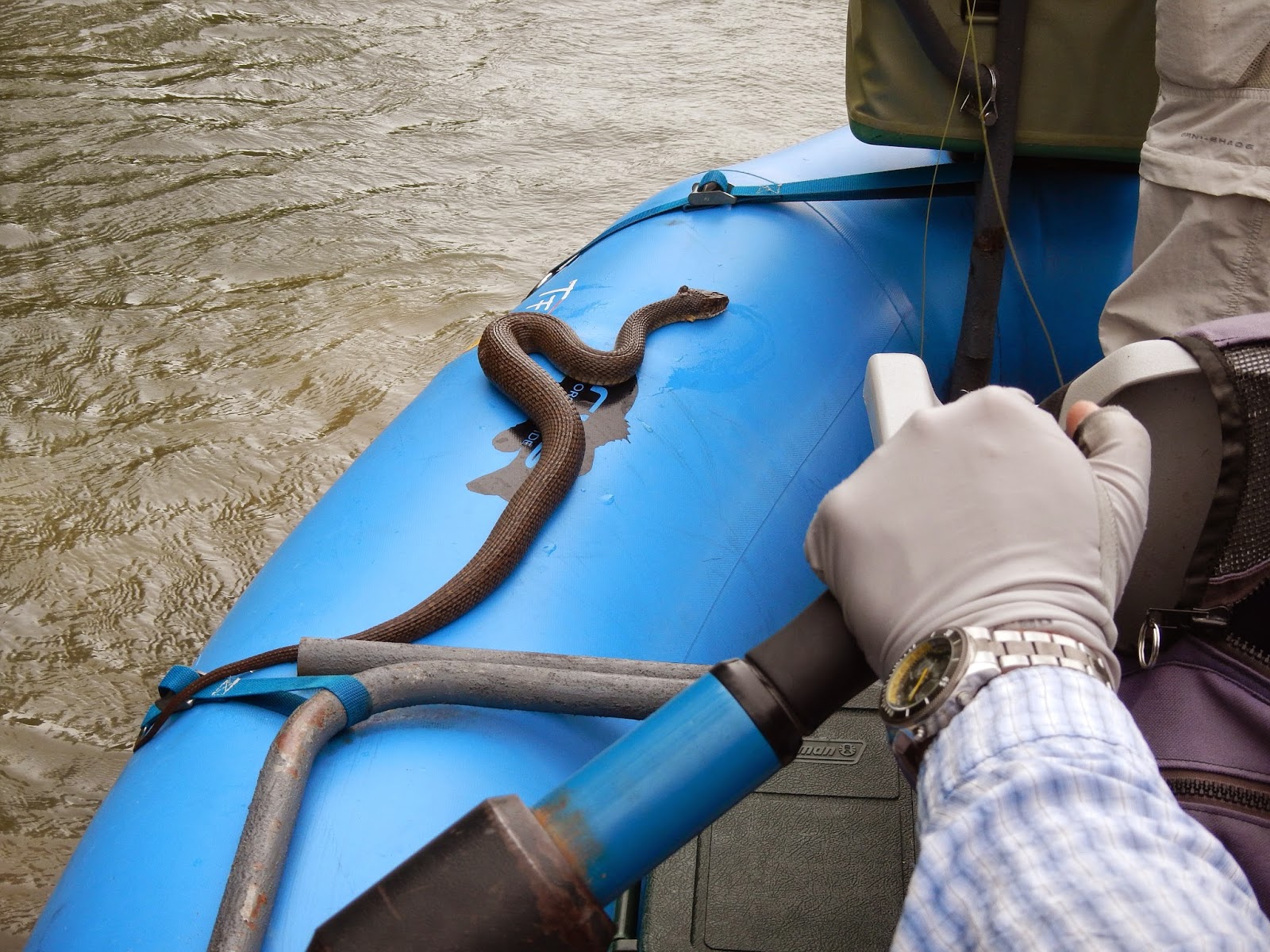 Cody's catches outnumbered mine, even hooking into a Gar, and catching a fair amount of Bluegill--rare lately on the Colorado, but I got to catch the largest Largemouth Bass of my career; she tipped the Boga at 4 lbs!  I also landed a 2 lb, very hefty girl.  I only caught one Bluegill, but it was a pretty fish.  Unfortunately, the Rio Grande Perch eluded us, this day, but the snakes did not.  It's mating season, and the snakes were numerous, including the dreaded Cottonmouth.  We sacrificed a couple flies when those slithering fellows were too near.

I have fished with many guides, but never have I fished with a person who is more gracious, more giving, more knowledgeable about his fishing environment, and generally likes people, as much as Kevin does. 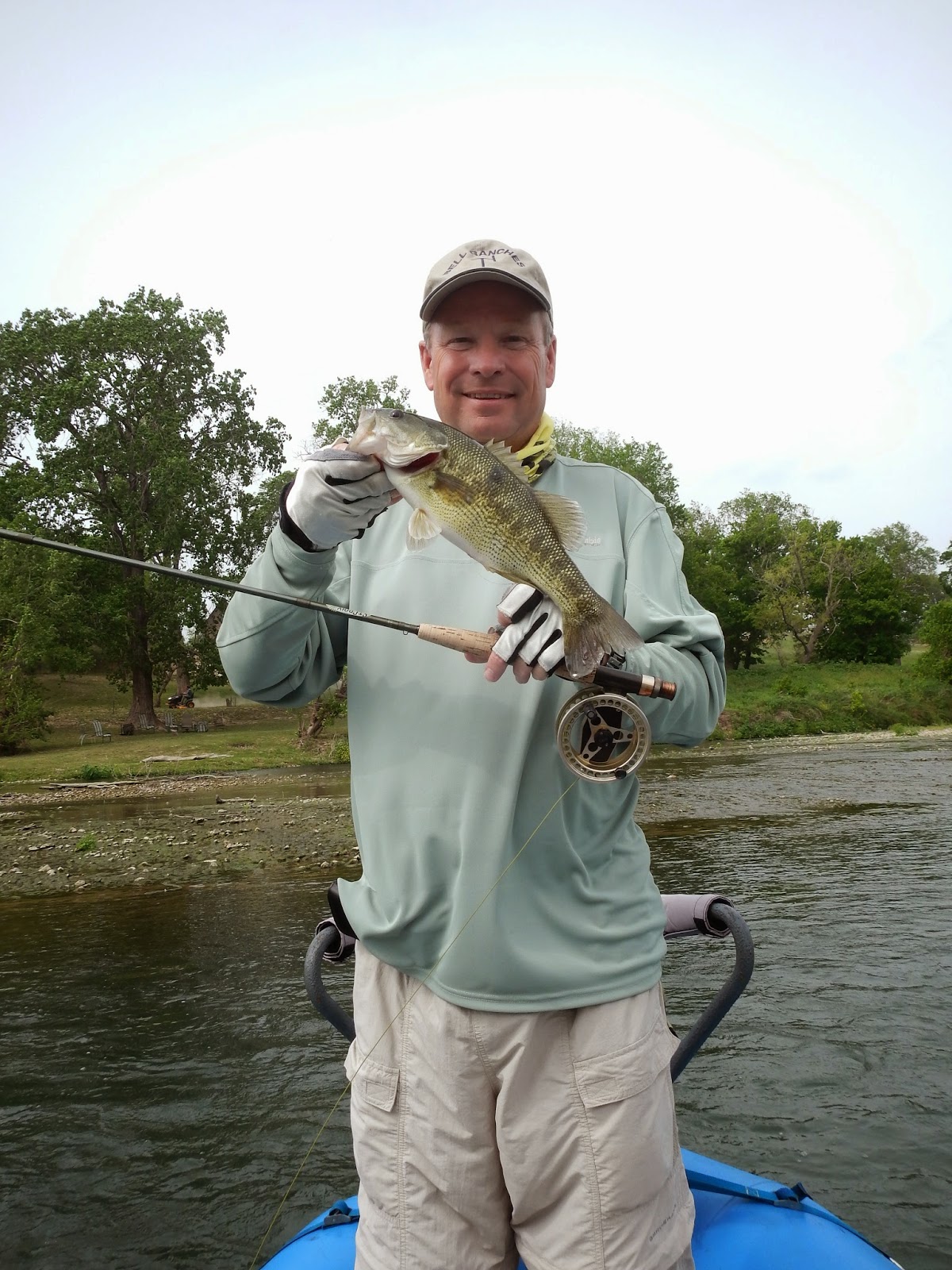 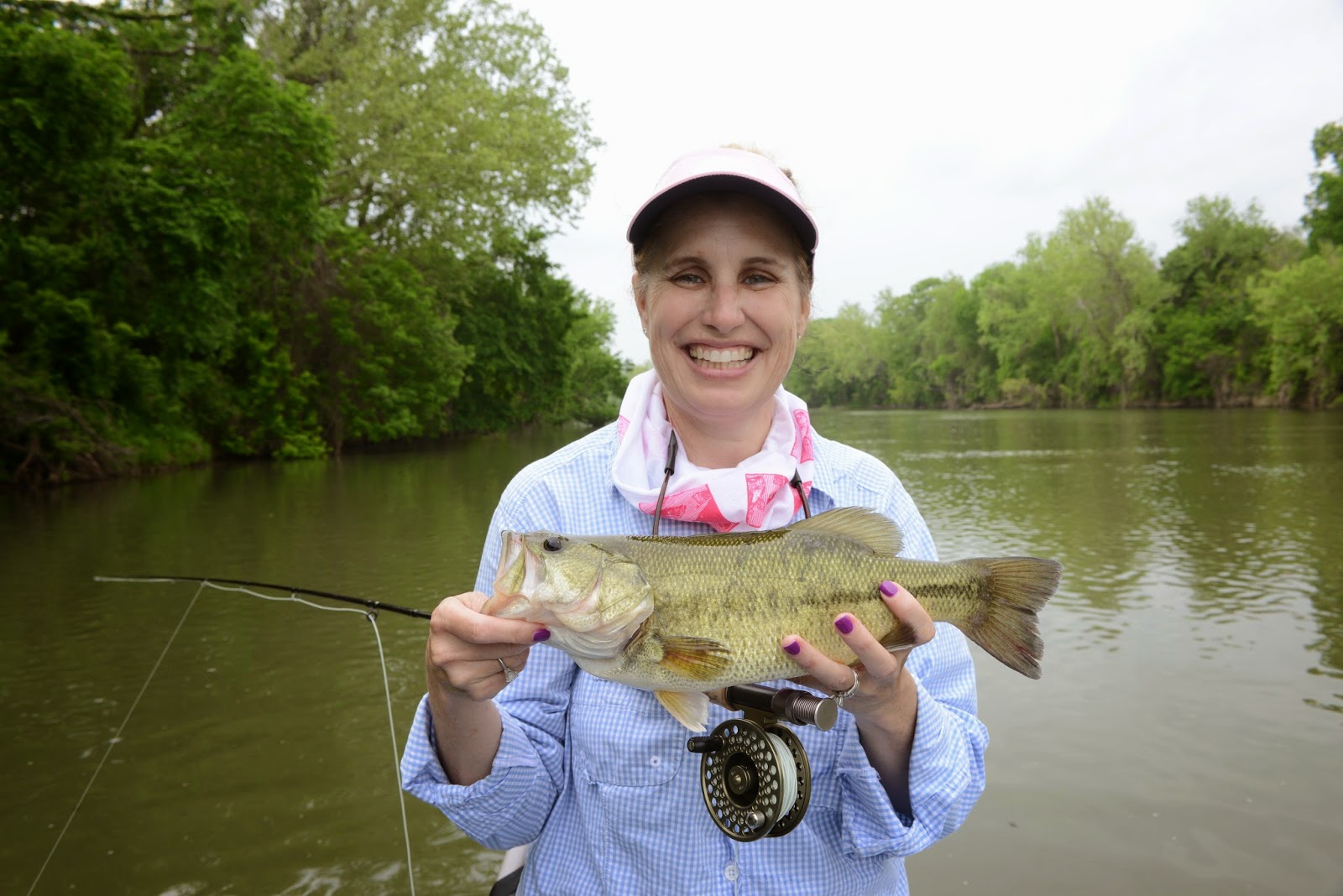 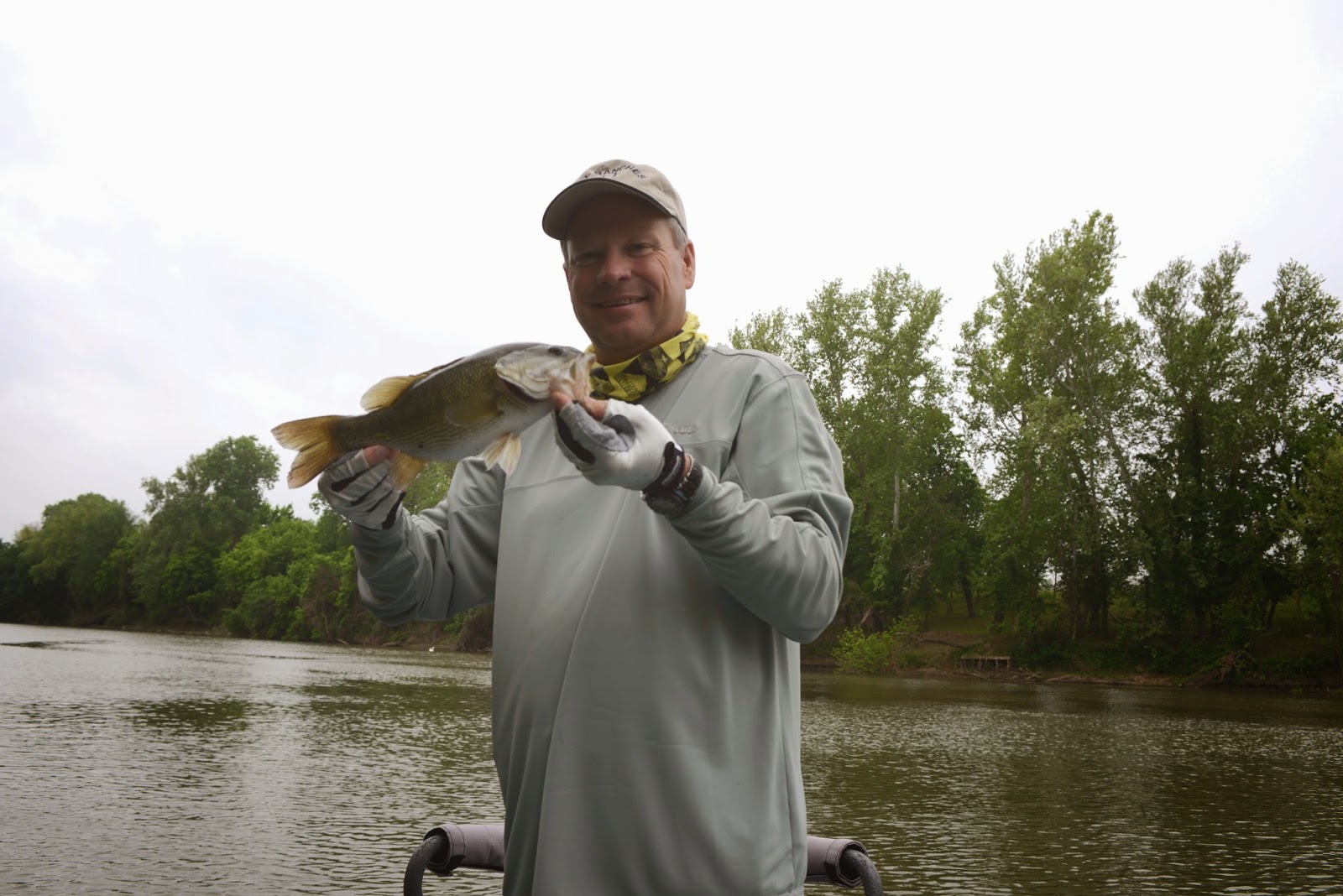 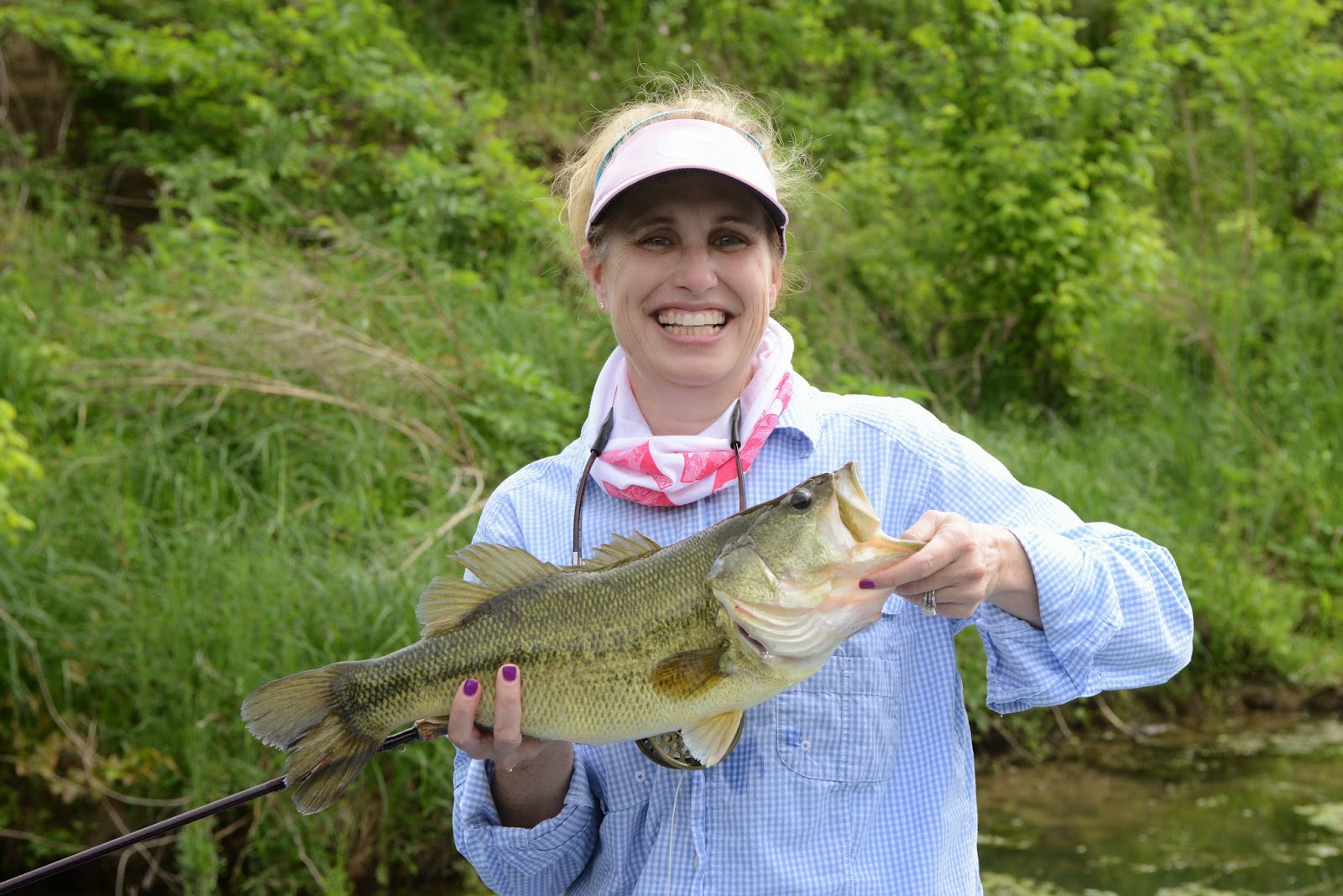