Written for OBN's TU Contest, but I didn't get it in on time.


Trout Unlimited's topic:  Tell us about your favorite trout fishing trip, no matter where it was, who was there, or if you even caught a thing. Include in your blog post why you think coldwater trout and salmon habitat deserves to be protected and restored.
When friends learned I landed a summer job in Montana in 2009, the fish stories began to fly.  Cody and I were told about the big browns and rainbows thriving in western and southern Montana waters.  One of the guys at TailWaters fly shop gave us a map book and asked us to field test it.  Someone else handed us a list of fly shops we "must" visit.  The hubbub was contagious and everyone couldn't wait for us to snap photos of our 25" to 30" + fish we were to catch.  Mid-June finally arrived, so we packed up both our cars, our little travel trailer, and trekked 1,600 miles north to Deer Lodge, Montana, near home to the headwaters of the famed Clark Fork.

My work week was Monday - Friday, so Cody used the time to explore the area.  Cody visited Shawn Ward with the U.S. Forest Service, and she showed Cody map after map, giving advice on water levels, snowmelts, at what height fish did not thrive, terrain cars could travel and not travel, just all the ins and outs of the Pintler Loop area and back east towards Helena.  On Saturdays and Sundays we played.  We fished the Big Hole River. We talked with a wonderful gentleman at The Missoulian Angler and learned about Rock Creek, Belmont Creek, the Clark Fork, and the Little Blackfoot River, and even though some of those places were Blue Ribbon Streams, we were having trouble even hooking a fish, forget the big Browns and 'Bows over which we had salivated the previous months.  Cody and I thoroughly enjoyed spending quality time learning new streams and rivers, but we wanted some fish on the end of our line; thus, there was one Friday afternoon trip that still stirs precious memories.
﻿﻿﻿﻿
We devised a new game plan and made the decision to go where everyone else did not.  Cody and I headed back east and took the Little Blackfoot River Road as far as it would go.  We donned our gear and hiked farther up river, which really at this point in its life is better described as a creek.  I took my 4# rod and tied a size 12 tan Elk Hair Caddis on my line--a completely ludicrous rig, I know.  Most of the time, my rod itself easily spanned the Little Blackfoot's width, but the many fallen trees and diverse bends created numerous, clear pools that looked fishy.  Those pools looked fishy, because they were fishy, abundantly fishy.  No, we didn't catch those fabled 30" + Montana Browns; we caught something more fun.  Most of our fish were literally the size of AA batteries, but they were healthy, vibrantly colored, wonderfully aggressive, naturally reproducing and thriving trout.  We easily sight-cast to these fish, who did not spook, which led us to believe that maybe, just maybe, Cody and I were the first people to ever catch these fish.  Truly, the colors of the Blackspotted Cutthroat Trout are nature's palette.

Since we drove to Montana, we saw a good part of the country up close-and-personal.  The pine beetle scourge was a sad sight to see as we passed through the Continental Divide near Butte, but an even more devastating sight occurred as we rounded I-90.  As Cody and I turned north to pass through Butte, staring at me full-in-the-face was the pathetic destruction of a mountain.  Literally, heavy equipment had clawed at its sides seeking a faster and safer way to extract the mountain's hidden and abundant natural resources, until it was an ugly, yellowish-tan scar on the land.  Unfortunately, Butte had several mountains that were only half a mountain, and soon to be no more.

In April 2010, Cody and I fished Ambergris Caye, Belize.  At the lodge where we stayed was a couple from Alaska who annually vacationed in Belize.  Sitting across from the man at dinner one evening, I asked about the Pebble Mine, indicating that I thought it would be disastrous to the salmon and trout fisheries.  Well, the Alaskan gentleman proceeded to let me know that the Pebble Mine threats to Bristol Bay's fishes was the most ludicrous, over-hyped piece of propaganda.  The man, a mining engineer, said it would take thousands of years to destroy one-third of the fish population in Bristol Bay.  I said no more.  Capitalism and a free society are the only way to live, in my opinion, but capitalism's downfall is unbridled greed.  As this man spouted his rhetoric about the Pebble Mine being no harm to nature, my mind flashed easily and quickly back to Butte and Anaconda, Montana.﻿﻿﻿﻿﻿﻿﻿﻿﻿﻿﻿


﻿I saw the mountains that were no more.  I saw Anaconda's huge, 150 feet high slag heap, a coal by-product which has no use and leeches in to the Clark Fork.  Upon our initial arrival to Montana, people told us about the huge trout in the Settlement Ponds north of Anaconda; then, quickly warned us not to keep or eat the fish.  I remember mosquitoes swarming everywhere around those ponds, but none on their waters, and I remember the fish.  Those Rainbows were big, but they didn't look, well, normal.  Then, I learned about the Osprey studies the U.S. Fish and Wildlife conduct to test the health of the Clark Fork's headwaters, and how happy they were that for the last four years (2006-2009), the waters had been pollution-free.  Anaconda's slag had been washing unabated in the Clark Fork for many years, killing the fish populations and affecting all the animals who dined on its fish from the headwaters to well past its confluence with the Little Blackfoot River; thus, the creation of the Settlement Ponds.  There are no fish in the first Settlement Pond, the one nearest the slag heap, by the way.  As that older gentleman who vacationed on income earned as an Alaskan mining engineer continued to espouse the farcity that was the anti-Pebble Mine campaign, I thought about those small trout at the near-headwaters of the Little Blackfoot River.  They provided me my greatest trout joy and my greatest lesson in moderation. 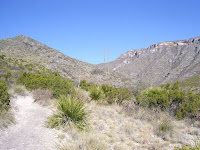 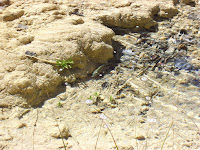 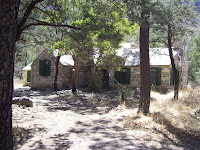 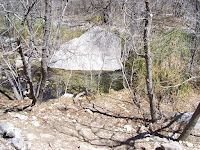 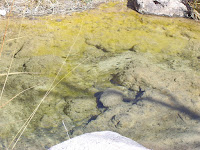 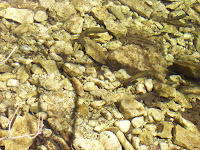 Being in a national park that does not permit fishing of any kind, this trout is not available to fishermen, even those many who practice catch and release, so the only way to capture these beauties is through the camera lens. While the population may be few in number and small in size, rainbow trout have become native to the creek, (Cody and I saw a total of 13 rainbows averaging 7”-8”), and thus answers the question: yes, DFFers, at 5, 238 feet and N31°58’ 43.6” W104° 46’ 58.2”, rainbow trout do reproduce and occur naturally in Texas!
Posted by flyfshrgrl at 12:09 AM 4 comments: