Cody and I took our new Lance RV south to Junction to participate in the 14th Oktoberfish hosted by the Fredericksburg Fly Fishers.  This was our 11th Oktoberfisch and the second one at the South Llano RV Park.  We had a good time, appreciated the improvements made by the RV park, and enjoyed fishing one of our favorite Texas rivers, whose health continues to improve from the fires, flooding, and drought.

We put in at our usual spot, the South Llano River State Park.  We endured quite a crowd and high river traffic on Saturday due to the Llano River Alliance Watershed's earlier announcement on their social media sites.


Texas Parks and Wildlife released 15 retired Guadalupe Bass broodstock back into the South Llano River on October 17, 2017. The broodstock were used to successfully restore the genetically hybridized South llano population. To celebrate this and other recent conservation successes for our state fish, Llano River Watershed Alliances is partnering with Texas Parks and Wildlife and Bass Pro Shops on a prize giveaway in which prizes will be presented to anglers who catch these Guadalupe Bass and return a tag Eligible Guadalupe Bass will have registered TPWD Floy Tags. If you catch one of these fish, please clip (do not pull) the tag and take a photo with the fish! Beginning October 17, 2017 and continuing until December 31, 2018, any angler who catches a tagged Guadalupe Bass from the South Llano River will receive their choice of prizes from an assortment of fly fishing gear donated by Bass Pro Shops.1

Our friend Russell Hustead caught the first tagged fish on Thursday; one was caught on Saturday, and bird had killed a tagged fish but the tag was submitted.  However, the crowds trying to catch one of these fish put intense pressure, and the Guads were rather shy on Saturday.

Friday, I had fished the stretch of river that was the southernmost end of the former Morgan Shady campground to just west of the bridge and hammered the Redbreast Sunfish.  They destroyed my Bonefish Bitter.


Cody decided upon a new strategy this year, which was to put in and then by-pass the fishing at the state park.  In years past, we would spend so much time fishing at the top part of the run, that we ended up just kayaking through the bottom part.  Cody also targeted all the sideways and byways of the river, fishing the places others snubbed.  We also decided to stay close together this trip.  Cody slayed the fish; I only did okay, because I didn't fulfill my motto, "I Come to the South for the Rio," but Cody caught some beautiful Rio Grande Perch.  They are some of my favorite freshwater fish.  I did catch the most numbers of Largemouth Bass I have ever caught on the South Llano, and I think Nick of the Alamo Fly Fishers, who also said he caught the most LMBs he's ever caught, was right in that the high presence of kayaks and numbers of anglers really spooked the Guadalupe Bass in to hiding, Saturday.

At the end of the day, Saturday, I was making my way down the "Park Run" (where I fished Friday from RV park boundary to RV park Boundary), when I heard another water craft pretty close behind me.  I didn't really pay attention to the boat, until I heard its pilot speak.  It was our friend Kevin Hutchison in his blue pontoon.  I let Kevin have the lead and watched him fish while we chatted, since Grad School had really interfered with my fishing the past two years.  The days cooler weather combined with the high angler pressure just did not produce the fish it did the previous day.  Regardless, I loved the rare treat of getting to see Kevin fish instead of being the guide.

We enjoyed our time in the Hill Country once again and are looking forward to next year's trip.  However, we hope the Alliance contest occurs after Oktoberfisch, so we don't have to "combat fish."

Cody could not be home for our 7th Anniversary, so for our anniversary, he gave me use of his car and encouraged me to go fishing in Backwoods' Trinity Bass Battle Tournament, which occurs every other Sunday through 12 November 2017!  So, I set my alarm, got up at 4:00 a.m., loaded Cody's car with all kinds of kayak and fly fishing paraphernalia (my little hybrid can't tow), and headed off to the Panther Pavilion area in Fort Worth.  I had a great day, even though I was the only fly fisher, and I was really excited to see a nice number of women fishing.

I didn't place, but I had my best tournament, E-V-E-R!  However, I couldn't get credit for all that I caught, because something happened when I snapped the photo of my 18 inch Largemouth.  It's just a white screen, and for those that don't know me, there ain't nothing white on my kayak.  Even my Hawg Trough is marked up with black, blue, and red lines, and my 'Yak, well, it's purple, pink, and gray; I kid you not!  I wore blue shorts and my pink Breast Cancer Awareness fishing shirt and sun visor.  I'm telling ya, I have no idea what happened on that photo, but I know I caught it, so the memory's mine.  Officially, I submitted 46.75 total inches; unofficially, I caught 64.75 inches.  Sadly, even if my big one had counted, I still would not have placed.  Big Bass was 20.25 inches with a two-way tie for third, with each fisherman submitting an 18.50 inch bass.  Overall winner today submitted an 80.something inches scorecard!  In Texas, Fall doesn't mean much, until it's time to fish, and then, it means everything because The Bite is happening! 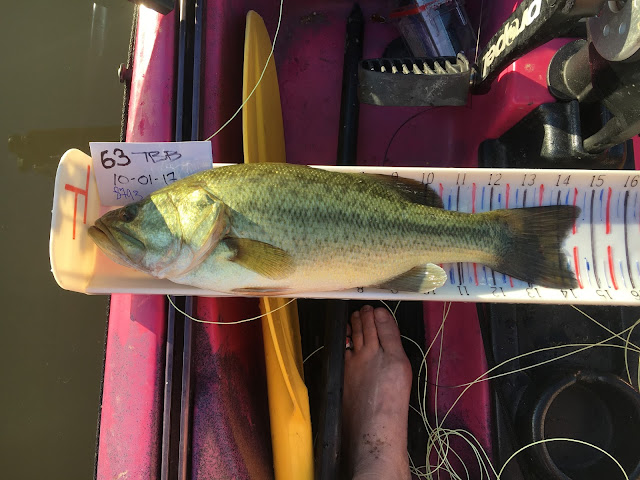 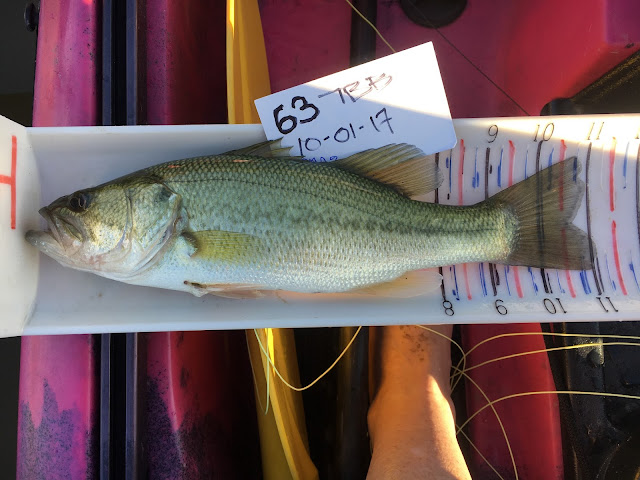 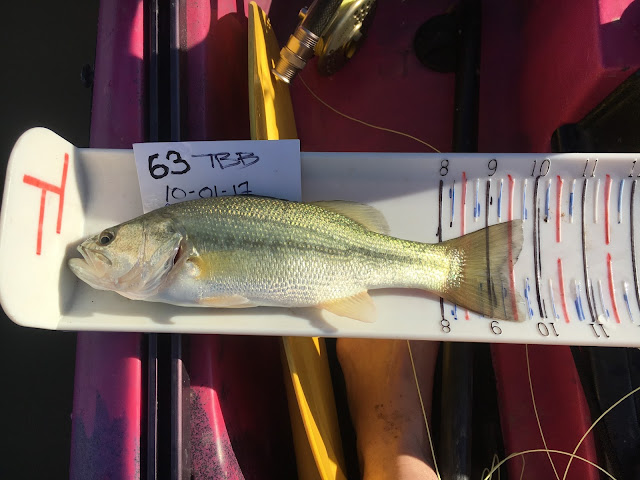 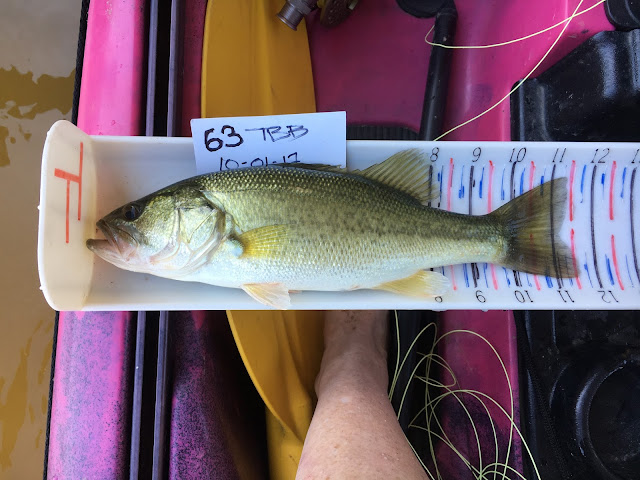 Posted by flyfshrgrl at 9:25 PM No comments: