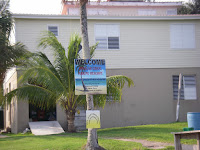 We fished Belizean waters for the last time today. Decidedly so, it was the day for Tarpon. Luis guided us in the Preserve waters, and immediately, we saw tailing Permit and some big Jack Crevalles. After briefly casting to them, to the Mangroves we motored. Luis knew several tarpon holes, but his honey-hole lagoon paid off. Those young tarpon rolled in the water flashing their pretty greenish and silvery scales at us, so Cody took the platform. Using a pretty chartreuse bunny that Cody tied himself, he began stalking those rolls. Eventually, the stalking paid off, and Cody landed an 8 pounder. We snapped some good photos with Cody and the King Tarpon, and Cody even managed to obtain a Tarpon scale. For the picture, Cody tried to lip that baby, and its mouth ripped Cody's thumb into several layers. 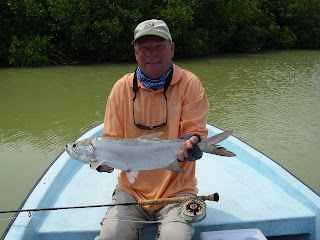 My turn. I tried several flies in several colors, but was not having much luck. Eventually, Luis stood on the casting bow with me, and while I casted at the 9 o'clock position, Mr. 13 ft. crocodile suddenly appeared at the 12 o'clock position. It startled me and the tarpon, because they stopped rolling. Luis told us that crocodiles eat tarpon!! As a result, we left and headed out to a much shallower and clearer lagoon. Being at low tide, we had to push the boat in and out of the lagoon, which produced no fish. As a result, we headed back to our original tarpon-rolling, honey hole lagoon.
This time, I brought my A+ game. My casting was perfection, but my flies were too small. Finally, Cody and Luis tied on a Black Death and second cast, a 30-40 lb. tarpon aggressively swam out from under the Mangroves and took my fly. Tarpon have a bony mouth, so setting the hook is important. I had forgotten to slip-set the hook until Luis reminded me; that done, the game was afoot. I jumped him once, and then Cody said reel in line not to just strip in line. I jumped the tarpon a second time, and Luis moved the boat back to keep the tarpon out of the Mangrove roots, and Cody videotaped. I jumped him a third time--King Tarpon did a one-and-a-half back flip--and I being an overly excited subject had my fingers pinching the line against the handle and I did not bow. When you don't bow to the King, you get punished. I did not land that tarpon, and Cody has it all on video. Being overly excited and wanting a second chance at that beast, I began casting for him and fell off the casting platform in to the boat. Somehow, my rod did not break, and even though it landed outside of the boat, the drag precariously balanced it on the outside of the gunwale. I beat my arm, knees, and chest up, but Cody managed to save my 8 wt. rod, the first one I built at Norm's, sporting my beautiful, purple Nautilus reel.

I wish Mulligans existed in fly fishing. This King Tarpon was my first hook-up and will haunt my mares for many years to come.
Posted by flyfshrgrl at 9:55 PM