What started out as a rough day, turned in to one of the finest saltwater fishing days for Cody and me. Being in a humid climate whose facilities only provide salt water with which to bathe, cleaning clothes, getting them aired out, and smelling somewhat civilized becomes a chore. Needless to say, we bought a shirt from the gift shop, so we wouldn't offend. Due to the extra-curricular shopping, breakfast was light and rushed.


We load up the Panga and aren't 30 seconds from shore, before my visor blows off my head and takes a drink. We retrieve it, but now our socks, gloves, and hat are wet, wet, wet. Cody and I are both thinking this is just not the way to start a good fishing day. We were wrong!!!

Head to the Permit flats--three boats are already there and no Permit. Head to the Bonefish honey hole and hook up with six. Move over to a beautiful reef flats where Erlindo poles us through. We see two nurse sharks and a black tip, in addition to some really big Bonefish. We cast, and I ended up with a Barracuda and a Mojarra. Cody caught two Barracudas and promptly dropped one in the boat. A flailing 'cuda with gnashing teeth is more excitement than I wanted. I just wanted to catch a beautiful little Nurse Shark is all. 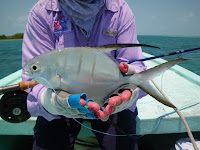 Erlindo moves us back towards the Permit flats, but there are no fish there, so we cut through the channel, and lo and behold, Erlindo spots Permit and Jack Crevalle swimming together in a rather large school. Cody and I casted to them but no hook ups. We follow them around the channel for a while but decide to throw anchor for lunch, which is interrupted by spotting the school several times. Cody and Erlindo talk about the school, when I spotted two at 11:00 from the bow. I shoved Cody out of the way, stripped out that blue Rio line, and cast that size 2 Gotcha, and the prettiest, but small, Permit chased and ate my fly. Then, "the girliness" came out. Yes, Cody caught it on video, but I caught my saltwater dream fish today, and that was the prettiest, little Permit. 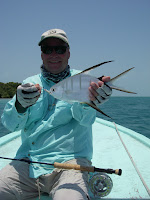 Okay, so my heart finally settles down, as the reality sinks in that I caught my desire, and Cody's on the casting bow. We had to hunt down that school, but again, they came in really nice at 11:00 off the bow. Cody casted and caught another pretty Permit, as well. Cody's Permit was slightly larger than mine, but two Permit for the boat is a wonderful day! Cody decided to cast again, and this time, he hooked up with a pretty Jack Crevalle.

Cody wanted the grand slam for the day, and while we looked for Baby Tarpon, we could find none. We ended the day bonefishing.