With Spring Break winding down, Cody and I decided to hit the White Bass run on the Nolan River at Adair Springs Park just south of Blum on FM 933.  Fishing on the Ides of March probably wasn't a good idea; I kind of know how Caesar felt.

Problem #1:  Every one else in Texas has the same Spring Break. There must have been 14 trucks parked along the roadside, and we arrived at 2:00 p.m.!  We get to the water, and it is not congested with fisherman after fisherman, thank goodness, but we have no idea where they have gone, nor how they got to where they were going. Evidence that people had been before us lay everywhere.  Humans are trashy, and why that good ole' country boy can't tote that beer bottle or can, those cigarette wrappers, and fishing paraphernalia out is beyond me. 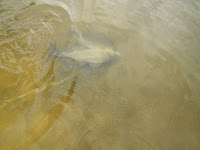 Problem #3:  Floating lines are useless.  Fish with either a full or intermediate sinking line or sink-tip line.  Plenty of whites crashing the surface, but not one person caught a fish on topwater.  I caught zero fish.  Cody's first hook-up was on a Beck's Sililegs Bonefish fly. His second hook-up and caught fish was on that same fly; both were at the north side confluence of the Adair Spring Creek and the Nolan River.

Problem #4:  When the after-work crowd appeared, they were loud, abundant, fished a spot someone else was fishing, and were keeping fish that did not meet the 10" minimum length requirement, but by-golly! they were going to get their 25 bag limit no matter what.  The run right now is just the males, but I hate to think what it's going to look like when those fat girls filled with roe start running, probably around the middle-to-end of next week.  In ALL the years I have had a fishing license, never once in my life have I encountered an official of any kind.  The Game Wardens could make a killing on fines on the Nolan.  Not many people had licenses, and they were bragging about it. 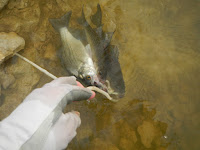 Two guys fishing the south side confluence of Adair Spring Creek and  the Nolan had caught four fish.  They kindly let me get a shot of their catches.  Cody and I each saw two really large, just under 2 lbs., White Bass, but the rest were average size males--3/4 to 1 1/4 pounds.  Now, the Alligator Gar were HUGE.  One that swam by was at least 3 feet long, conservatively!  (I had my fly rod laying on the ground while I tied on a new fly and measured the Gar against my rod.)  The other two were around 2 feet.  Cody caught another fish on a small lead-eye red and white Clouser Minnow.  We are definitely going to hit the Nolan again when the females make their run, but in a boat!  Here are some pictures from April 2011 and today. 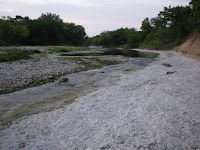 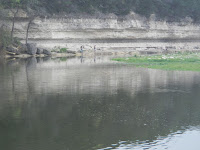