We put in at San Pedro Canyon, a new destination for Cody Mood Bell, but reading the map's "hot spots," it looked like it would produce fish.  When Ken Burns created his Lewis and Clark:  The Corps of Discovery documentary, at the end of the part one, he said Lewis and Clark were about to learn the difference between mountains on a map and mountains in real life.  Today, Cody and Julia fully comprehended Burns' words and learned the difference between hot fishing spots on a map and true hot spots.

We saw fish, had fish turn to look at our flies and nudge our flies, and even watched several inhale and promptly spit out our flies, but catching them eluded us dramatically.  We should have known that the day was going to be difficult when Cody hung his fly on a submerged tree.  We trolled over, as we always do, and Cody attempted to free his fly from the tree.  Unfortunately, it was too wrapped around the branch, so Cody decided to break off and sacrifice the Creek Crawler fly to the waters.  When Cody went to tie on a new fly, he realized that the rod's tip section was missing and had become separated when he broke off the fly and his line popped through the guides.  Well, Cody tells me he's going snorkeling, and as soon as he turns his back, that TFO 7# tip section bobs up in the water--tip down.  We have to be very careful trolling to it so that the water wake does not flood the open end.  Gratefully, Cody is able to pinch that tip and retrieve it from the waters.  Cody switches rods, and we continue fishing the San Pedro Cove--with no luck!

We had made a deal before beginning to fish, that if neither of us liked where we were fishing, we had to tell the other, and we would move to a new spot.  With no fish to our credit and well in to our second hour on the water, we headed to the flats, which were supposed to be hot for Largemouth's from May - October.  No nips, no hits, no fish--the flats were cold regardless the season's temperatures.  Thus, Cody ate and in my desperation, I tied a beautiful blue dragonfly pattern to my floating line in the attempts to catch one of the many carp that constantly crashed the surface.  (Those who know my fishing preferences have just been given CPR to read that I deigned to fish for carp; I strongly dislike carp, regardless of the fact they are nicknamed the golden bonefish and give an excellent fight; I do not like carp!)

We gave up on San Pedro Canyon, even though there were several coves that looked like the Texas shoreline of Lake Texoma, and motored to Rough Canyon.  We knew the day would be exceptionally crowded, but NPS needed to have a traffic officer directing boaters.  Cody got sprayed and drenched by one show-boating wakeboarder (due to me snapping his photograph, eging him on), and Cody had a few choice words for the ole boy, which can not be repeated here--not curse words, but not acceptable for print, either.

We worked our way around other boaters in Big Canyon to a nice rocky cove, and four hours after putting in, we started to catch fish.  Bluegills, and small ones at that, but fish nonetheless began to eat our flies.  The curse was off and the good karma flowed.  It took a lot of different flies before we found the ones that would land fish.  For Cody it was the CodyBugger, red lips, and me, the Bonefish Bitter, brown.  By the time I quit fishing my bitter, the head was the only thing left, but fish kept taking the fly, so I didn't change it until absolutely necessary.  We worked on casting, calling shots, and calling fish, but we kept catching the little fellows.
Tired and watching the sun begin to wan, we made our way back to San Pedro Canyon, at least an hour's boat ride.  Now, in all fairness, Cody's flats boat is only equipped with a 25hp Mercury motor, which equates to about 15 mph, as long as someone sits on the casting platform, which Cody did while I drove.  We both decided the Texoma-esque shoreline proved too tempting, so we fished the boulder-lined coves until our arms fell off. 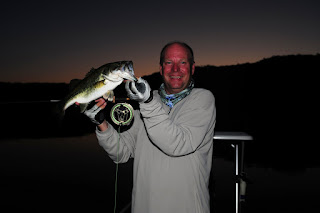 Not wanting to call it quits because there were still fish to catch, we fished a big, beautiful cove just west of the U.S. 277 bridge.  We tried poppers and Miss Prissys to no avail.  Cody tied on a CodyBugger, and I a Swamp Monster, and just as the sun dipped behind the canyon, Cody landed his second bass for the day--a 1.75lb Largemouth.  Thankfully, God gave us Bluegill; otherwise, the boat's fish count for the day would have been two!
I have not checked today's weather history, but I can tell you that a front moved in or something else caused the barometric pressure to drop.  I have heard it said by old men, that if the cows are sitting, the day's not fit for fishing.  I should have remembered that saying/lesson, and we could have snorkeled even though the waters were not clear like the previous three days--another sign of the changing barometric pressure.  We head home, Monday, and with the freeways being congested with Memorial Day travelers, it looks like it is the backroads (I am happy) for us.