Cody and I headed for Branson to meet up with the Fords.  We took two cars--Cody is pulling the RV, and I am pulling the boat.  We made it to Fayetteville, Arkansas where we stopped at a rather remote RV park with awesome WiFi connections. 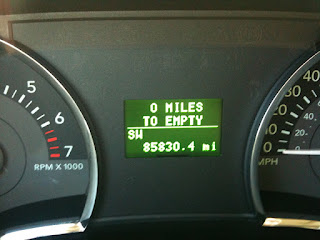 When we travel with two cars, Cody and I pack the walkie-talkies, so we can communicate rather easily.  Cody provided the entertainment for the day.  Pulling the RV, Cody's car gets about 12 miles per gallon, which equates to about 160 travel miles before needing to gas up.  Our tanks were full when we left Palmer.  Cody gassed in Sherman, Savanna, OK, and totally pushed his luck to get to Fayetteville, and not just any where in Fayetteville, oh, no!  We passed at least two gas stations, and then Cody comes on the walkie-talkie as he is coasting through the yellow-lit intersection, "I think I've pushed my luck.  I think I'm out of gas."  Of course, I got caught at the red light, but I watch the RV coast up the road two blocks to Wal-mart.  Cody couldn't gas anywhere, only at Wal-mart, which was pretty cheap.  After four warnings, he had 0 miles left until he ran out of gas.  Cody is one of the luckiest people I know.

Cody is rigging up my 4 wt. Sharkskin sinking line (thank you TailWaters), and putting a sinking line on my brand new Ross 6 wt. Evolution LT reel (Thank you Travis at TailWaters).  We read the Lilley story Bradley shared on his fb page, and we are excited about catching some trout.  I want some Big Browns, but of course, will be happy to have anything, but carp, on the end of my line.