What an up-and-down week in my fly fishing world it has been, and it is only Wednesday! 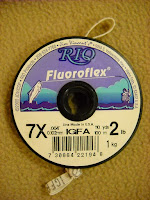 Saturday--Up:  I found the ever elusive IGFA 1kg/2.2lb class tippet for which I had been searching for the past six months, and Float and Fish marked it half off the regular price (I mean, afterall, what idiot really wants this tippet?)! 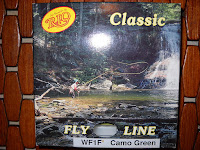 Sunday--Up:  I found a Rio 1# line for the 1# rod I wish to build this year, and  Dos Amigos Fly Anglers had it marked at half off the regular price.
Down:  I have no 1# rod to build. 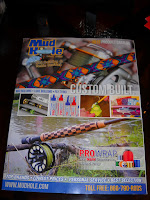 Monday--Up:  We received the Mud Hole 2012 catalog, and lo and behold, our untouched photo submission shared the front cover honors!  This was a really fun and completely unexpected and unannounced surprise. 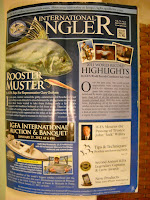 Down:  We received the Jan/Feb 2012 IGFA magazine/newsletter,  and I immediately turned to the World Records section.  Scanning through it I became very, very disheartened that no Bluefin Trevally in 2kg/4.4lb light class tippet was awarded.  However, I was relieved when I looked at all the records published to see that they occurred between March - August 2011.  Hopefully, the September-December 2011 World Records will be published in the March/April 2012 magazine, seeing as Cody and I have no idea how IGFA informs an angler of their certified world record catch.
Up:  Dallas Fly Fishers held their first meeting of 2012, and we started the year off with Rick Pope as our guest speaker!  The first 10 days of the fishing season for Cody and I has begun really, really well! 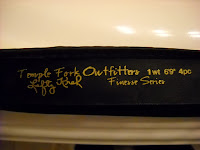 Tuesday--Up:  Cody visited Tailwaters and purchased my 1# TFO Finesse blank; Thank you Rick Pope and Tailwaters; Thank you!
Down:  I can not find a true 1# reel.  I like the looks and weight of Abel's Trout Light reel Dark Green (yes, Bart, I said Abel), but I am not certain about not having an easily accessible drag.  For me, the drag will be important, because I intend to take this 1# out to catch bass of reasonable size, so this 1# set-up will be used for more than just stocker Trout and baby Bluegill.  I carried out on-line research of the Lamson LiteSpeed reel, but it weighs .7 oz more than the Trout Light, and the Lamson has an "unbalanced" or "harsh, rugged" look about it when paired with the delicacy of this rod.  Part of this is my quirkiness or penchant that all my rods and reels have a theme to them.  (My purple reel is used only for my 9# rod, which is tied with purple threads; my gold reel is used only for my 8# rod, which is tied with gold threads, and so it goes for each of my rods and their coordinating reels, of which no two reels are the same color--2# Grey Mist, 4# Copper, 5# Pink, 6# OD Green, 6# Black, 7# Blood Red, 8# Gold, 9# Purple, & 10# Silver.)  Thus, I can not devise my thread wrapping scheme, thread colors, guide colors, nor a name for this 1#.  It will come, and I will figure it out, but it isn't coming together as quickly as I would like.

Wednesday--Down:  I can not find a Ross CLA 1 Copper spool, and I have asked many fly shops,  phoned Ross Reels, and laboriously delved through e-bay's offerings.  I fish my 4# with a Rio Gold WF4F as often as I fish it with a Sharkskin 150 grain sinking line.  I tire of cutting the backing and a little of each fly line every time I want to switch out the lines.  Ross discontinued the Copper CLA 1 spool, and it seems that no one has one.  Now, there are a plethora of CLA 1.5 copper spools, and why this is, I do not know.
Down:  I am going to have to "settle" for a wader that does not fit 100%, including the top-end, high dollar models.  Even this girl does not understand how the fly fishing producers create Women's waders, and I like to shop, and I like clothes and shoes!

Eventually, everything will sort itself out or it won't.  Either way, I will find what works for me, but in the meantime, I thoroughly understand the song, "Everybody's working for the weekend!"  I hope yours is wonderful!