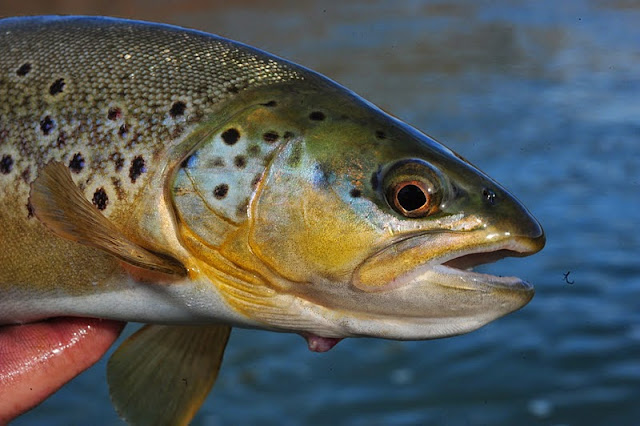 Cody and I awoke to a robust morning temperature of 18˚F!  Fortunately, we weren't meeting our guide,  Jeremy Nolan of Heads Up Flyfishing, until 9 a.m., so that gave the clear blue, sunshiny day a chance to warm up.  Plus, we were not wading, but floating the river from Jeremy's drift boat.

We put in at the Texas Hole, and believe it or not (because we surely didn't, and we saw it for ourselves), there was only one car in the parking lot.  There was only one person on the water, and this was about 9:30 a.m.

We set out with the river pretty much to ourselves for at least an hour-and-a-half.  Cody's hook-set was spot on which yielded a number of nice trout in the boat.  I kept losing fish, because I was strip-setting, a big no-no when it comes to catching trout.  Eventually, I got my hook-set going and was able to put fish in the boat, too.

In the morning, we nymphed with egg patterns and midge droppers; Cody's midge was red, and mine  was green.  We caught more Brown Trout, and so Jeremy used an eye dropper to see what the Brownies were eating.  Lots of big scuds, a red worm, and midges.  After a nice streamside lunch, we switched to streamers with a mayfly dropper, and my hook rate increased dramatically.  I tried dry fly fishing to two trout languishing on top, but they so pointedly ignored my Parachute Adams and Griffith's Gnat, that they didn't border on being rude; they were very rude fish.  No more dry flies for the remainder of the day, and back to nymphing it was.

We hit some fantastic banks and caught fish, including one egg-laying female.  (The egg imitation patterns  are really some good flies when compared with the real thing.)  The sun dropped behind the snow-covered mountains and temperatures dropped.  We finished the day quickly after that and took out at the Crusher Hole.

Posted by flyfshrgrl at 9:47 PM