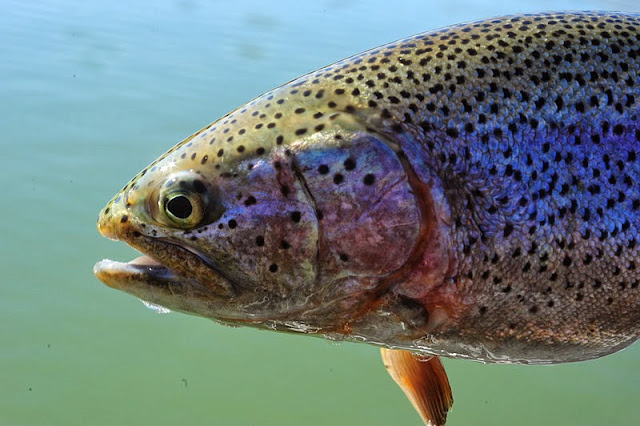 The Texas Hole and a size 28 red larva dropper were the keys to  success for today, and with this set-up,  Rainbow Trout were at the end of our lines.  We fished with Jerome Gallegos, manager of The San Juan Angler fly shop in Durango, Colorado, who was very patient and willing to put up with our photograph antics, especially playing with the GoPro!

Again, nymphing was the fishing technique for the morning.  Cody caught more fish than me, but I at least reduced the numbers of lost fish due to the strip-set, thank goodness!  With warmer weather (morning temp was 25˚F; afternoon temp was 46˚F) and no wind at all, there was a larger crowd on the water (six boats working the Texas Hole at 10 a.m.), and the larger fish from Tuesday were staying away from all anglers' flies.  Cody ended up bringing 11 fish in the boat, and I netted seven.  I attempted the Trout Trifecta but fell one catch short.  I nymphed a beautiful Rainbow, became tired of nymphing, and switched to streamer fishing the GirlieBugger on my 2#.  Second cast, and it was Rainbow TroutOn!  Cody and I both dry fly fished the mayfly hatch at the pool across from the ET rock, but we came up nil and returned to nymphing.  We did manage to catch a couple of nice Browns below ET rock.

I made many interesting observations for the day--places that were just teeming with fish yesterday were void of fish today; fish stock piled behind large boulders and snubbed flies; Brown trout were more sluggish in the quicker waters but aggressively chased one another, including the one that tried to eat a small Rainbow Cody had hooked.  We caught two small trout that are a Steelhead and Rainbow crossbreed, and two small Browns contained large, thumbprint spots below their lateral lines.  All-in-all, it was another great day on the water.
Posted by flyfshrgrl at 10:47 PM