Day three turned out to be a bit of a difficult day, because we couldn’t find fish.  Tommy typically guides on Alphonse and was serving as a substitute guide on Cosmoledo.  We ended up fishing Cemetery Point, an area Tommy had never guided previously.  We covered a large amount of coastline before the tide started producing fish on the flats, and we did get to see Cosmoledo’s cemetery, though we didn’t go ashore.  We could see crosses marking gravesites even though those graves were from the 1700s, so the archivist and historian in me was at least occupied while we waited for the fish.  Cody eventually went ashore to take photos and film, especially the turtle tracks from their previous night's nesting.

Finally, some sharks started to appear, and I have always wanted to catch a Lemon Shark, a Nurse Shark, or a Black Tip Shark, as long as they were about a meter or less.  I casted to several, but none were in a feeding mode, just more cruising the flats than anything.  While Cody was wanting to take some shoreline videos of us on the flats, a GT came inshore off the surf.  He promptly headed back out, but signs of life started to appear.  Since we were not wading or walking, I sat down to take my boots off, because my feet were hot.  Tommy called out that there was a Jeet, get ready to cast.  I stood back up on the casting platform—right in the middle of my fly line.  I casted, stripped, and hooked a Jeet, who promptly made a run before I could completely remove my foot from the line.  I did use my foot to strip set the hook tightly in the Jeet's scissors, but Tommy hears my hopping on the casting platform.  Turning to see that my foot is wrapped, he helped me untangle myself and keep the fish on my line.  Fortunately, I was only wrapped once, and this Jeet didn’t feel like running too fast. Cody was much farther down the shoreline, so he had a bit of a walk, but he made it back and took some nice photos and videos.  Jeets grunt like little piglest, so that was fun to hear.

After we let him go, we decided to stay in the water.  Cody saw another Jeet coming in on the tide, so he grabbed his 12# rod, and began casting.  Cody casted his fly about 75 feet, and that GT pounced on his tan, 8/0 Brush Fly.  While Cody’s fighting his fish, I saw some nice Bonefish cruising the flat coming towards Cody’s Jeet, so I cast to them.  We did a pretty good job keeping the fish disentangled from one another, in spite of their long runs, and we produced a nice Cosmo FishOn! Double!  I had hoped our splashing fish would attract a small shark or two, but no such luck.  After releasing, we continued covering the flats until the dropping tide demanded we move off or get stranded.  We headed into the lagoon, where a lesson in patience would be required. 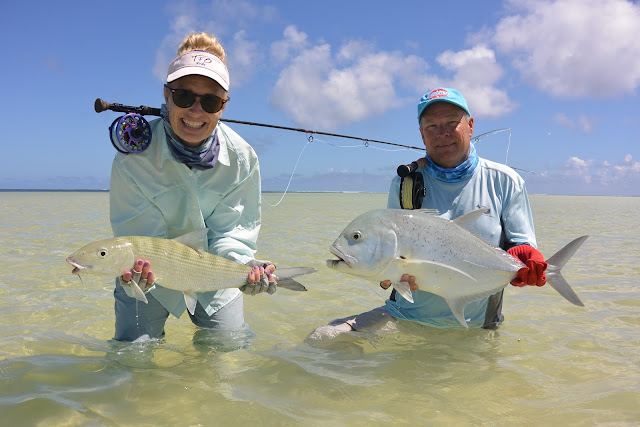 Chalk it up to being tired or thinking about it being the last day on Cosmo or thinking ahead to Alphonse or thinking about slamming a third day in a row, my casting fell apart, and I couldn’t strip well, get the rod to load, hit a target, or spot fish.  I just sat down for a while to gather my thoughts.  We came across nice Milkfish schools on the flats, but they weren’t feeding.  Then, we saw nothing but white sandy flats and no fish, not even mullet.  Cody tired of standing.  We got out and walked over the shallowest areas, because the water was too skinny.  We weren’t seeing fish, and we later learned, the Jeets had stacked up in the lagoon near the Lonestar, because Randy and David landed 32!

When targeting Cosmo’s GTs, especially on the flats, mudding rays typically have GTs in tow.  It is an interesting relationship to observe, and I like rays.  Tommy was very good pointing out the different species of rays, the length of their tails, which species had stingers, which did not.  We spotted several Thornback Rays, which have thorns or spines along their back and tail, but Tommy let us know that Jeets don’t follow these rays.  I became proficient at identifying these rays.  Cody let me up on the casting platform as we headed off, trying to go some where that might have fish.  Tommy was cruising to a ledge drop off, when he stops the boat immediately still on the flat, and yells, “Backcast, quickly, NOW!”  I backcasted, never seeing exactly where I was to place my fly, when Cody and Tommy are yelling, “STRIP!  STRIP!  STRIP!  STRIP!”  Suddenly, my line goes tight, and the fish heads back towards the sand flat, thankfully, and not to the coral ledge.  After a good fight, we get this Geet landed—incident-free, I might add—and we decided to measure him.  Spot on the nose, I caught an 80 cm GT that was cruising on the back of a Thronback Ray using a back cast to a fish I never saw while trying to maintain my balance to keep from flying off the bow due to the sudden stop.  Definitely a memorable fish. 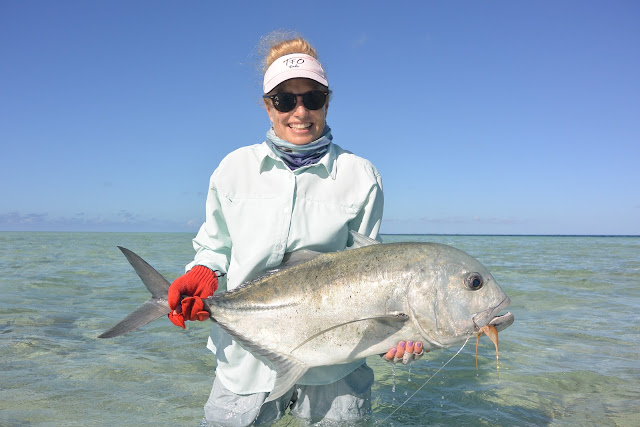 Eventually, it was time to return to Lonestar, which was being prepped for an eight hour, nighttime sail due west to Assumption Island, from where we would fly out back east to Alphonse the next day. Cosmo, you taught me much, and I will miss you!

Posted by flyfshrgrl at 7:00 PM