If Astove was the steep learning curve, Cosmoledo proved to be a viable testing ground.  Arriving on Cosmoledo meant boarding the Lonestar live-aboard catamaran and traveling northwesterly overnight for four hours from Astove.  When dawn arrived, Jude captained us into Cosmoledo’s lagoon, where we ate breakfast, met our guides, and prepared for three days of incredible flats fly fishing.

Cody showed off our first two days on Cosmoledo by slamming the fish species.  Fishing a flats area known as Southwest required us to fish overhangs similar to fishing for Bass under ledges along the Colorado River, except that Cosmoledo meant we were sight casting to fish.  Our guide, Tommy Hradecky, spotted a Giant Trevally hugging tight under the rocky shoreline.  Cody casted and hooked up with a small but aggressive Giant Trevally.  Strip setting nicely, Cody played that fish well, keeping that Jeet from hiding in the craggy, coral shoreline. I also tried my hand at fishing the coastline, but the dropping tide pushed the GTs to other areas. 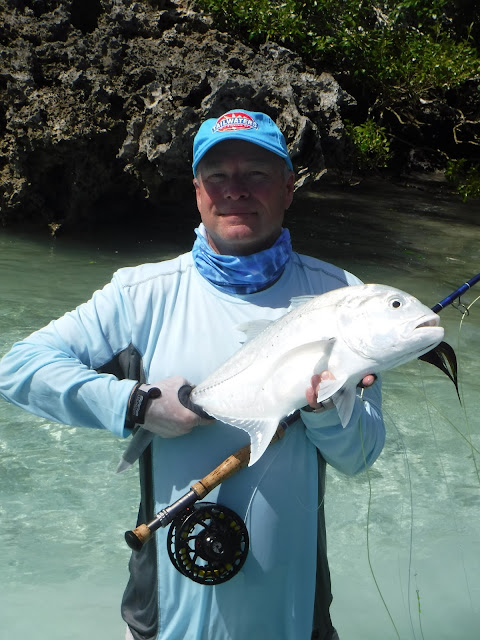 We moved off to other flats areas, and I got to cast to some GTs, but regrettably many turned off my moving fly.  With the exception of the one time I watched my retrieve, which caused me to miss the strip, which stopped the fly, which made the GT turn off, we couldn’t figure out why they were turning off as quickly as they turned on.  Jeets just weren’t going to be on my menu, the first day.

Heading to a nice turtlegrass area, Cody caught his first Moustache Trigger.  It was fun watching that fish tail, then flop over, and go nose down on Cody’s shrimp-pattern fly.  It took several of those teeth nip-nip-nips before the Trigger inhaled, but once he did, it was MoustacheOn! 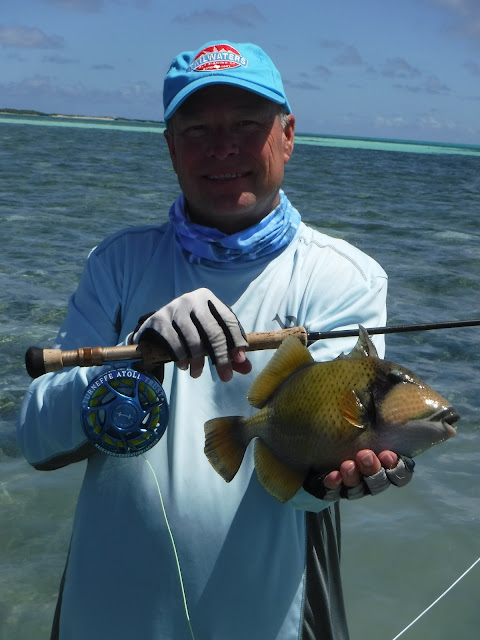 After lunch, we headed out to the surf to cast to feeding Milkfish and tease up some GTs from the deeper waters.  Cody casted to several schools of Milks, but they just weren’t taking the fly.  Teasing Jeets is definitely a team effort between Guide and Fly Caster.  I worked on timing and targeting, and even though I didn’t manage to catch a Jeet, I did catch a beautiful Bluefin Trevally.  I LOVE Bluefins, even though they aren’t quite the fighters that GTs are, they are still a fun species to target and catch. 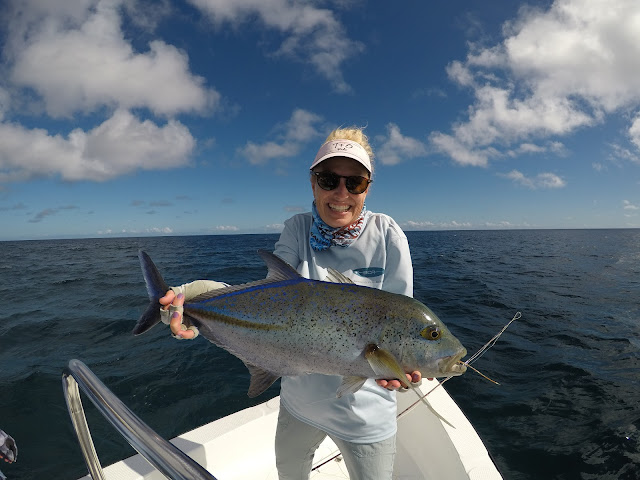 Time was drawing near to end our first day, and we decided that we wanted Cody to have a good opportunity for getting a Flats Slam, so Tommy headed off to search for Bonefish.  Unlike Alphonse, where the Bonefish are plentiful, Cosmo’s Bones are not present in large numbers, but once found, their sizes are larger than Alphonse.  Tommy boated us on a nice flat with a good pushing tide.  We waited about ten minutes, and three Bones came cruising down the sand flat.  Casting beautifully, Cody waited for the Bones to near, and then with three nice strips, it was BonefishOn! and a Flats Slam!  It was nice to shake the frustration of Astove’s fishing, to see fish, avoid surf trekking, and watch Cody species slam. 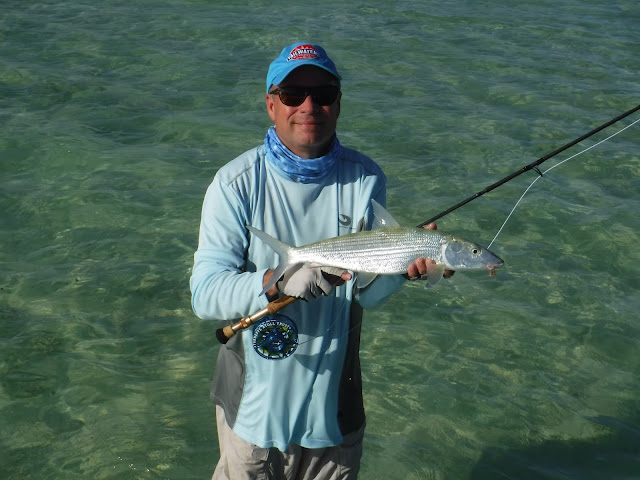