Cody’s dream fish has been the Milkfish.  In 2011 on Alphonse, I watched Cody cast to feeding Milkfish, casting the fly directly in a Milk’s mouth, which is about the size of a Solo Cup’s mouth, only to see it not eat.  Timing is key to catching a Milkfish.  If they are not feeding on the surface or 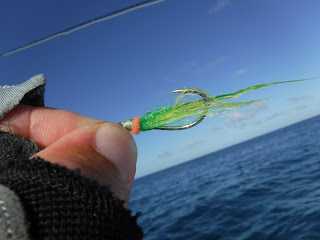 on the flats, Milks are uncatchable.  Since Cody had enjoyed such a successful day the previous day, we decided to hit the surf for Milkfish.  Cody casted to several schools cruising by feeding on the surface, but our fly just wasn’t getting to the right depth in the water column.  The fibers were trapping air, keeping it floating on top, instead of the needed four to six inches below the surface.  Tommy tied on one of the early Milkfish fly patterns, and Cody casting to the third school, it was MilkfishOn!

Cody and I have affectionately dubbed Milkfish as Popeyes of the Sea.  These beasts eat only algae and the tiny zooplankton and other microscopic bugs that attach to the algae—That’s It! However, their vegan diet in no way diminishes their size, strength, and ability to put up a fight of a lifetime.  Milkfish are unique and beautiful, especially with that turquoise stripe along its back, light maroon lateral line, silver sides, oval mouth, big eyes, and strong, forked tail.  As tough as Milkfish fight, a fly fisher must handle the fight delicately even though a 10# rod is the typical fisherman’s arsenal.

Cody’s hooked Milk decided to stay with a group of other Milkfish, and then a second group, and a third group before Cody fought it out of the schools.  Milkfish take a lot of line, easily going into the backing, and letting the Milk run is just something that has to be done and without cranking down on the drag.  Pumping and winding and pumping and winding is the strategy to first slow down their runs.  In all, Cody’s fight took 23 minutes.  It was both fun and worrisome to watch this fight, as I wanted Code to land his dream fish.

After saying goodbye, we headed to the Flats to see if my luck catching GTs could improve.  Thank goodness, Tommy really enjoys guiding, because I wouldn’t have caught my first hooked Jeet without his help.  Hooking the fish in the scissors and a hard strip set created the run reaction, and even though I wear great Patagonia fishing gloves, I still got a finger burn.  That prompted me to quickly let go of the slack line, which then popped back and wrapped around the bottom stripping guide.  Needless to say, incident-free fishing wasn’t going to happen for me today, which meant Tommy had to work really hard. 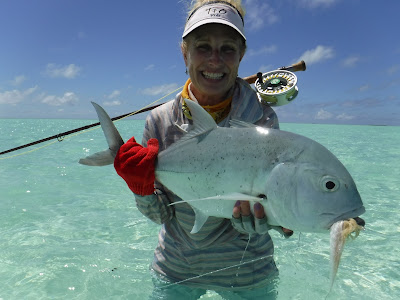 My first Giant Trevally was not the biggest, the fastest, nor did it light-up the brightest, but it was a fun fish and a lifetime memory.  I loved catching it; it made me want to catch more Jeets, and I learned that I preferred catching them on the flats versus teasing them or dredging for them.  Stalking them over a beautiful white sand flat or turtlegrass, timing the cast, placing the fly properly, and then stripping successfully is an indescribable thrill; work, yes, but equally as thrilling, especially when that line goes tight.

Cody wanted in on the fun, so catching a bigger Jeet than the previous day’s catch was next on his agenda.  Still stalking the white sand flats for these cruising beasts, Cody landed a really nice GT 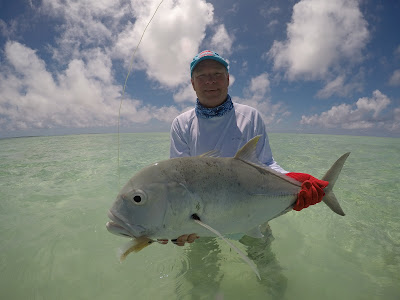 —on his first cast, no less.  Cody made catching these monsters look effortless.  It also meant that Cody was on target for a slam of some type, and it wasn’t even lunch time! 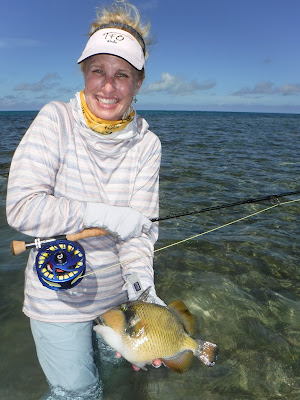 After lunch, Tommy put us on turtlegrass flats to target Triggerfish.  One of my goals in coming to the Seychelles was to reach the Triggerfish Trifecta—Moustache, Picasso, and Yellowmargin.  I loved Cody’s Moustache Trigger from the previous day, and in 2011, I had caught a Picasso.  I hooked up with two Picasso’s on Astove, but they broke me off on coral, so I was a little determined.  We came upon a little Moustache, who was both happy and hungry.  I casted my size 2 Shrimp pattern to this little fellow, and he nip-nip-nipped it.  However, after four different casts and repeat eating behavior and NOT spooking this little guy, we decided the fly was just too big for him to inhale.  Cody and I packed many of our Bonefish Bitters, and Tommy decided that an amber-colored one might work.  Lo and behold, this little guy inhaled the Bitter, and then promptly hid in a coral hidey-hole.  In spite of my high rod angle, there was no teasing, pulling, or getting that fish out of his coral home.  Bless Tommy’s heart, he braved a Trigger’s teeth, which can cleanly sever a human finger in one chomp, and worked that little fellow out of his hole.  As a result, I reeled it in, we landed him, and I now had caught two of the three desired Trigger species.

No sooner had we released my Trigger, when Tommy spotted another feeding Trigger, and this one 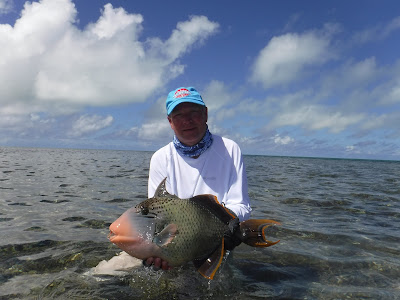 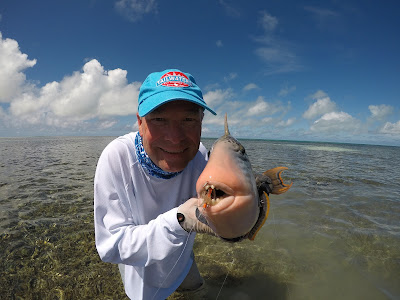 was a hoss!  Cody casted and as the Trigger was chasing the fly, another Trigger came up.  When two Triggers are present, they are in essence squabbling over territory and are thus NOT feeding.  These two chased one another for a while, but amazingly, the bigger of the two returned.  Cody casted again, and the second, pesky Trigger reappeared.  They fussed and chased one another, and finally the intruder left.  Cody casted a third time, and this fella inhaled and crushed Cody’s fly and made a run straight for a coral balmy head.  Cody fought and played the fish quite nicely, but it just kept running for that coral, and since Cody’s Trigger was much bigger, if it went into the coral,
it was staying.  Cody fought it, standing the Trigger on its head, while Tommy chased after it to keep it away from the coral head.  It was a long run, but between the two, Cody landed a 54 cm Yellowmargin Trigger, which was absolutely the most beautiful Trigger I had ever seen.   Cody was now on for a Flats Grand Slam; all he needed was a Bonefish.

We had a couple of hours left in the day, so I wanted the chance to catch a Yellowmargin myself.  The Triggers had been appearing in abundance, and it didn’t take long before we found another one happily feeding in turtlegrass.  The bow of the boat is known as 12 o’clock.  We were fishing at the 4 o’clock position.  This fish was feeding so happily that he missed my fly as it passed him by, twice!  Still actively feeding, I cast a third time, garnered his attention, and he was chasing my fly, when he quit, just quit.  Tommy starts yelling, STRIP!  STRIP! STRIP! so I continued stripping.  From our 8 o’clock, unbeknownst to us, a Jeet had seen that size 2 Shrimp fly and came zooming in to steal the meal from the Trigger.  Chaos ensued!  I hooked him, but I had a 10# rod rigged with 25 pound test tippet and a size 2 fly, not a 12# rod rigged with 130 pound test and a size 8/0 fly, and this guy was headed straight for a balmy coral head with a knotted loop in my fly line running through my guides.

Believing that I really wouldn’t land this fellow, as I could exert little pressure, I listened to Tommy, who was standing in the water shouting instructions as to how to play him.  Rod up; reel; rod tip down; reel quickly; rod up; not too much pressure; let him run; don’t let him run.  Tommy hopped in the boat and moved us first closer to the Jeet, so I could reel in a large amount of line, then putted us backwards away from the coral head, and hopped back into the water while Cody used the push pole to hold us into place.  Somehow, we had applied enough pressure on the fish, that he stopped running.  Turning my rod guides-side up, so I could reel the knot through much easier, Tommy followed the fly line to the leader.  Oh my word, we landed that fish! 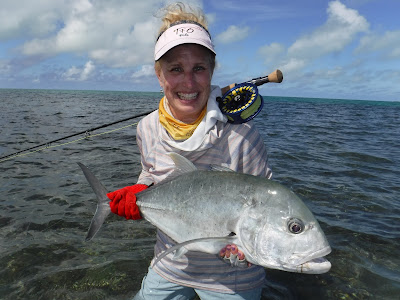 Now, it was time to find Cody a Bonefish, and the tide was rising. Tommy called to the other guides to see if anyone else had seen any Bones, but nobody was within radio distance. Near the lagoon where the Lonestar was moored was a nice sand flat where many species of fish cruise the flats line on a significantly changing tide. We rolled up on herds of mullet and Milkfish, whose forked tails protrude the water surface similar to Bonefish. Finally, after searching, hoping, and waiting, a small school of Bones came cruising down the flat. Cody casted, stripped, and it was BonefishOn! Cody continued stripping, set the hook nicely, and that Bone began an epic Bonefish run. Cody reeled, and as the fish turned to make his second run, POP! The line came zinging back at the boat, Fast; BonefishOff! We all had forgotten that Cody’s Trigger had bent the hook on his fly, and when the Bonefish turned to run, the fly just slipped out of its soft, rubbery mouth. After tying on a new Shrimp pattern, we boated twenty minutes back to Southwest where Cody caught his Bonefish the previous day, and we waited, and we waited, and we waited some more. Waves of Milks came cruising by, and we waited even more. The tide had risen significantly, making the area too deep for Bonefish. For fear of being eaten, Bonefish stay in shallow water to keep GTs and sharks at bay. We headed back to Lonestar, but before calling it a day, we tried to find one last school of Bones cruising the same area where Cody had lost his earlier Bone. We searched, we looked, we hoped, but this isn’t Alphonse; it’s Cosmoledo, where the Bones are bigger but less plentiful. Regrettably, we had to give up. Cody got his second Slam for his Milk, Jeet, and Trigger, but it wasn’t the Grand Slam he’d wanted. It was an EPIC day of fishing, though.
Posted by flyfshrgrl at 6:00 PM