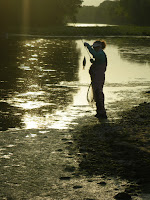 ﻿
Cody and I read Russell's post about Sandies in the Nolan on the Texas Fishing Forum's Fly Fishing posts.  I went to high school in Granbury and lived near the De Cordova Bend Dam.  I canoed a short stretch of the Nolan one afternoon more than 25 years ago, and it looked like the pictures in Russell's post was the place I had been.  Missing the White Bass run wherever we went this season, I sweet-talked Cody Bell in to a Sunday afternoon trip to the Nolan. 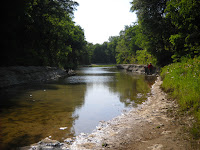 We tried to get in at Adair Spring Park, but the ambulance, fire truck, and volunteer fire fighters blocked the way, so we headed over to Nolan River Park, aka Poison Ivy Heaven.  The wind blew straight from the west with no buffer, and Cody intended to wet wade and didn't feel like a long, drawn-out ordeal with Poison Ivy.  We monitored the airwaves for news on the activity at Adair Spring.  Care Flight had been released; they decided not to boat the victim to help, and when we made it back over there, medical crews were leisurely leaving.  We waited, pulled in, geared up, and headed on. 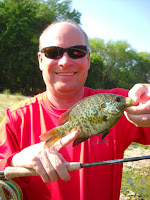 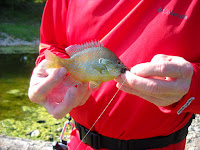 We waded the creek bed to its confluence with the Nolan.  Cody crossed to the western side and found a nice bed of greedy Redear Sunfish.  There was a Mama Bass bedding and lots of rather large, 12 oz. size, Redears lurking, hoping to eat some eggs.  We left the Mama alone and targeted the harassing Redears, who just loved the CodyBugger fly.  They were hungry, greedy, and hammering the flies.  Even a little Dollar Sunfish got in on the action. 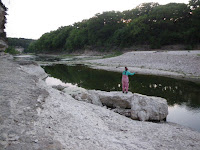 We passed the narrow little slew that opened in to a nice elongated pool, and choosing the low bank, we cast to and caught some aggressive Bluegill.  Eventually, we climbed and walked the high bank, and realized that the pool was somewhat shallower than we thought originally, but with our polarized glasses and sunlight, it was like looking in to a managed aquarium.  We saw a male Largemouth Bass and small, separate schools of Bluegill.  Due to its shallow depth, the Duckweed was rather a nuisance, but the Bluegills were fun. 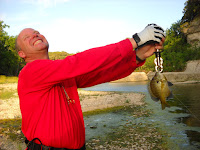 Originally, we planned to hike all the way to the old train tress, but the trail became difficult and laden with Poison Ivy, so we decided that the pool beginning at the big boulders resting in the river bed was as far as we would go.  Cody cast his CodyBugger, and we saw the hit-and-run, silver flash of the White Bass.  I switched out my fly to a Bonefish Bitter, hoping that crayfish were on the fishes' menu.  Cody caught two nice-sized Bluegill, and I wandered over to the riverbank and began fishing the tree-lined, shady streamside.  Spending about 10 minutes over there, I hear Cody hollering and walking his pet "fish on its leash" towards me.  Sure enough, a nice White Bass was at the end of Cody's line. 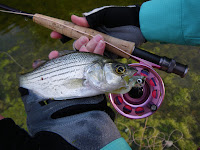 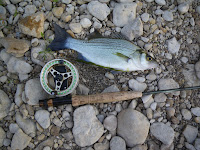 Cody switched to a bead-chain eye, grey-and-white Clouser, and had moved about 15 ft. farther downstream from where he caught the Bluegill.  Sharing another bead-chain Clouser in chartreuse and white, Cody showed me where to cast, offered the advice to strip quickly, and I had FishOn!, too.  It was a nice White Bass.  I was happy, but now I had to know if my BassBrunch--Gizzard Shad pattern would work.  I moved about 6 ft. downstream, and even though the Duckweed would cover the fly, entangle the lines, and snag in the guides, the spot was the honey hole!  My BassBrunch was the fly I had hoped it would be.  I ended up catching eight White Bass on my fly, and Cody continued to catch them on his Clouser.  Finally, after a continual chorus of FishOn!, Cody gave the five-minute call.

Our sweet friend, fellow fly tyer, and DFF member Harvey Stahl passed away on Wednesday 6 April 2011, and Harvey's memorial service would be Monday, so before my last cast, I called the final fish of the day in memory of Harvey.  I was rewarded with a rather nice White Bass.  Cody also called his Last Cast in Harvey's memory and was honored nicely, too.  We missed the White Bass run on the Sabine and Colorado Rivers, so stumbling in to the White Bass on our first fishing trip to the Nolan--wonderful.  Designing a successful fly--superb.  The fact that we were the only two on the river--priceless!
﻿
﻿