Since Friday's test went so well, I decided today would be Test Day 2.  Cody bought clams and veal for supper, so my test wasn't going to last long.  I also heard some advice about fishing, and I wanted to test out the theory.  Yesterday, Monday, was a rather cold day, with the nighttime temps getting in to the mid 30s.  Today warmed up to 72 degrees, so it was time to get the fishing going.

I again chose the Streetman pond, and seeing as I had about 30-40 minutes in which to fish, I neglected the northern and eastern shores.  I fished along the western shore as I headed south, and in the southwestern corner, I had a hit.  Immediately afterwards, the fellow jumped out of the water.  Talk about rubbing salt in some wounds.  I fished the area again but with no luck.  I was fishing from about 40 feet from the bank.  I hit many spots along the southern bank, and fished pretty heavily where I caught Friday's fish.  No luck, though.  The wind blew from the northwest, so I let it push my tube easterly.  About 15 feet from where I caught Friday's Largemouth Bass, Bam!  FishOn.  I didn't set the hook really well though, and in his mid-air jump, he threw my fly off.  It could have easily been the same fish from Friday.  I continued to let the wind blow me to the southeastern corner with no other bites, but I was content that I had a fish take the fly. 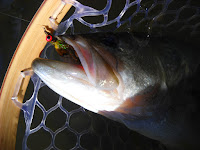 I was feeling pretty good, two days, two fish, the Bass Brunch is working.  Now, I wanted to test out advice I had heard from two different people that the bigger fish are 8-12 feet, at least, from shore, not necessarily hugging the bottom in the springtime, but farther back than the spawning females.  Second 80 foot cast, about 1/3 of the line stripped in, and something grabbed my line and pulled hard.  I don't know why I always initially think that I'm hung up, but I do.  I was using my 4# rod, and I knew I had a big fish on the end of my line for that rod size.  Rob Woodruff gave some advice on landing bass, and it was to bring your hand perpendicular to the water line, which causes the fish to fight the entire rod and not just the tip section.  Why, in my excitement I chose to remember that, I do not know, but remember and apply that tidbit I did, and what a difference in the fight.  At one time the fish was pulling really hard to get away.  One time it jumped out of the water, shaking its head side-to-side, and another instance, it swam straight at me, but when it turned and I pushed my wrist down, the fish's fight subsided quickly.  I landed him in the net and began the picture taking. 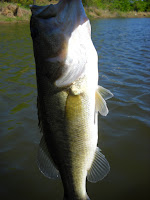 I held the fish as far away from me as I could, and I couldn't frame the fish entirely.  I put the fish on my tube's bib, and I held the camera as high as I could over my head, getting 99.9% of the fish framed.  I measured, and he was a little more than 15 3/4" long and about 6" girth.  I don't have a Boga Grip, so I don't know how much it weighed, but I would guess over a 1 pound.  Fighting a fish in a float tube v. from a boat adds a new perspective easily.  I know the fight is a lot more fun in the tube.  I photographed him as best I could and let him go.

Seeing as I had been on the water since 3:50, it was time to come off and head home for veal and a clam bake.  I love this field testing and will be trying out a different water body a little later in the week.  Hopefully, I will be like the Rangers' Kinsler and Cruz--3 days, 3 hits, 3 home runs, baby! 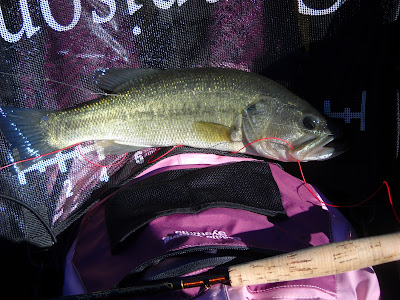 Posted by flyfshrgrl at 9:15 PM