I worked on tying more Bass Brunch flies this week, but with work, didn't give fishing too much thought, until Friday.  On the old 75 Dallas-Houston highway, which is now State Highway 75, I pass through a town called Streetman in northern Freestone County when I go in to the office.  In Streetman are three nice one-yhree acre ponds.  They look really, really fishy.  One day in May 2010, I stopped on my way home to briefly fish the southern shore of the front pond.  I wasn't dismayed, catching one Largemouth Bass on a small red and white Clouser.  As often as I pass these ponds, I have only fished one shore of one pond, once.

I fished from the western shore, but seeing as the water is low and trees circle the bank, there just isn't much fishing that can be done successfully from the bank.  I got the float tube, the 4#, and the camera, because I was determined to catch fish.  The north and west sides were a waste of time, except that I got some practice in throwing the line.  I had Bass Brunch tied on my 150 grain sinking line.  There are some fishy spots, but they are very silty instead of rocky, so spawning is a little more difficult for the bass.  Since the pond is about six to seven feet low, there is an abundance of weed growth, and while the fly pulled through it okay, I did get tired of catching grass.

Moving to the east side (and sunnier side), I cast in to this one little mouth where it was rather shallow, safe from the wind, and flat.  I immediately thought I was hung up in weeds, until the "weeds" pulled back heading toward the tree stump.  The bass fought nicely, but I brought her in to the tube.  I was the only person on the pond, but I hooted, hollered, and laughed joyously.  My fly creation worked.  I landed the Largemouth Bass, not a big one by any means, but it was a fish, nonetheless, and it was the species I was targeting.  I hooked up with four more, but they broke off in the grass and on a stump.

We tied flies at Bass Pro Shops Saturday morning, and I tied more of the Bream pattern.  I will work on the Shad patterns, and then test those out on Lake Texoma.  What a penultimate--a fish caught on a rod I built with a fly I tied, and a pattern I created! 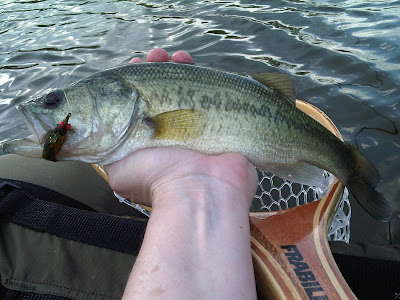 Posted by flyfshrgrl at 7:05 PM