Today we fished Lake Taneycomo, and since neither Cody nor I have ever fished it before, it was a learning lesson.  The boat only had three fish for the day, so it was a hard learning lesson.  We motored to the tail end of the Trophy Spot, and began casting.  Fish swam everywhere!  I think I could have dipped the net in the water and landed two dozen fish, easily.  They followed the boat; they swam with the boat; the zoomed out of the boat's path.  Finally, fishing from the back and watching at least 15 fish give chase, nudge, and nip my CodyBugger, a beautiful 13.5" Rainbow Trout inhaled my fly and turned to swim off downstream.  It was great fun watching it all happen.  I used my new Sharkskin sinking line on my recently repaired 4 wt. rod, the last rod I completed at Norm's.  Oh, it was great fun!  That fish would run away pulling line out, which Sharkskin line has a nice zinging hum as a fish pulls line off that reel.  Then, he would rest, and I'd reel him in, and he'd catch his second wind and zoom, off he went, again.  This see-saw action lasted for about three or four minutes, before Cody netted that pretty little fish.  Fishing the same way, I caught another Rainbow about 30 minutes later, but this guy was a hair bigger but much fiestier.  He jumped twice, once about three feet wide and the second time about two feet in the air.  Getting this fish to pose for a photo presented a problem, but master photographer Cody Bell got the shot, in spite of my weak attempts to hold the fish.  Cody fished two flies spread along his leader, and nymphing, he landed a "Golden Bonefish" (carp) on a fly he tied.  The carp here do not act like carp elsewhere.  Gorging themselves on scuds, they don't make fast or long runs.  Cody gave this carp a run, though.  Cody teased that fish right off the river/lake bottom, made it take line, and netted that goldie.  Seeing as those carp are super slimy, Cody posed with him in the net, but before Cody put him back in the drink, that fished pooped all over the net and the inside of the boat.  We don't keep our fish, so they shouldn't behave so badly.

We are staying at Cooper's Creek RV park.  Nestled precariously on a caliche precipice in slot 50, we have not been able to level the RV, even with blocks, but we are in the shade.  Great selection of cable channels but poor reception.  Yes, CC has free WiFi, but only at the office area.  Ambient water temp is 90 degrees, so we don't really need to turn the water heater for the showers.
This area is climate crazy.  Off the water, the humidity is around 60-70%, and yes, we are in the Ozark Mountains; on the water, sometimes it is non-existent, and then, a pocket appears.  We do not arise early because the foggy fog (Scooby-Doo days) hovers over the water at least 6 feet high.  Fishing really doesn't begin until about 9 a.m., but even then, the fog is present. 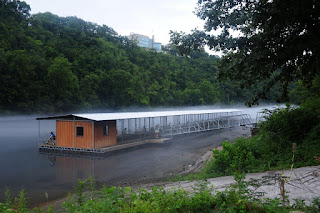 The water flows from east to west.  Until around 1 p.m., none of the Table Rock Dam floodgates stay closed, which means at times, we are in 20" deep water or shallower.  Afterwards, the floodgates make the water flow around 6-7 mph.  We used a chain this evening to keep us straight and to slow our float, but at times we were drifting at 5 mph--very difficult fishing.  Areas that were ankle-deep this morning, were 16 feet deep this afternoon.  Also, the fog starts rolling in ever so slightly, but present nonetheless, around 4:30.  The sun shines brightly and heatedly but hit a pocket of misty fog and the temperature easily drops 30 degrees or more.  Move out of the fog pocket, and the temps rise immediately back into the low 90s.  All the while, the water maintains a trout-happy 49 degrees.  Limestone bottomed, the rainbows, browns, and carp are easily visible, so visible that watching the fish move aside to let a fly pass by, then move back in their little niche frustrates fishermen of all types.  The title of lake is a misnomer, because this water body looks like a river, moves like a river, and fishes like a river, never wider than 50-60 yards.
We have really enjoyed meeting up with the Fords, my friends from Corsicana High School teaching days.  This has been their family vacation spot for over 26 years.  They bunk at Lilley's Landing, about four or five boat docks up river from our spot.  The area is beautiful with tree-lined, steep cliffs.  We did not fish, yesterday, because we hooked up the RV, put the boat in the slip, rigged up our rods, and just settled in the area, Mr. Ford took Bradley, Stephanie, Cody, and I down river 7 miles to the smallest Bass Pro Shop and to the Branson Riverfront Mall.  Traveling by boat is much better than traveling by car.  Think of the River Styx; Highway 76 is its equivalent.  Mr. Ford gave us some backroads, yeah!, to drive around, so we could meet them for lunch, and the backroads are the way to travel in this city.  Otherwise, its just one extremely long parking lot.
Fishing the morning hours until early afternoon is going to be the way to catch fish.  Then, being tourists in the afternoon and evening is how we can make the most of our stay.
Posted by flyfshrgrl at 9:05 PM