Weather creates all kinds of emotions, and today, it was consternation. Where Tuesday was idyllic, today was torturous. Winds were up to about 17 mph, out of the ENE, and the temperature was 68°F. Overall, this year has produced the oddest weather patterns I have seen in Texas ever, and it has been more frustrating than fun, especially since the wind has been a big factor. Warm winds, cold winds, regardless, I don’t like the wind, and while I try to keep in mind The Rime of the Ancient Mariner, because conditions at and near the equator can be quite calm, which exacerbates the humidity and heat, I just wish the winds would die down.

For part of the day, Jason and Dawn were boating with us, so it was to Rough Canyon. I enjoy Rough Canyon. It was the first place I fished my first time at Amistad, and it was genuinely good to me. We boated north to check out Indian Springs, and it is still underwater by about 14 feet. The waters around it, though, look like tropical waters. My first visit to Rough Canyon was soon after our trip to the Seychelles, and the Devils River feeding in to the lake produces water clarity and color just like the tropics, regardless the depth. Deep greens, pale greens, rich blues, it’s all there, along with tall canyon walls. Overall, the lake is still up, but I think from last year to this year, it is down about six to seven feet. We ventured farther up the river (it is no longer Lake Amistad) to Oak Tree Camp, where the waters become shallow, about four feet. It’s odd; in my memory and my Texas Rivers & Rapids book 1972 & 2000 editions, the river was not accessible by boat at this point. This is a treasured camping spot for river rafters along the Devil’s River, where land access is sacrosanct and heavily guarded. Its beauty is unsurpassed, but the fishing here is almost non-existent.
﻿
﻿﻿﻿﻿﻿﻿﻿﻿Enough site-seeing and tour-guiding, we headed back down to Four Poles to fish. I love this canyon-walled, tree and shrub-lined spot, because the varied and abundance of fish species is unsurpassed—true Basses, Sunfish, and Carp abound. The wind, however, would not allow us to fish. Even with the drift sock and trolling motor, the wind crashed us directly into the trees. At first gusting and then sustained at 25 mph, we just couldn’t fight the wind and w

hitecapping waves, so on to Satan Canyon we went; what a nice respite. We caught Sunfish from the shallow side and nothing along the deep, canyon wall side. Back in the farthest section of the canyon, we discovered a spring that we had never seen before today. We push-poled the skiff in to about 10 inches of water and watched the spring. The waters around this area circulated oddly, but due to the spring, they did move. Near the spring, we also found about 20 abandoned Sunfish beds. For us, it was quite fun. Having played this canyon out, regrettably, it was time to move back out in to the winds and fish our way back to Rough Canyon Marina.

I love skiff boats; for fly fishing, they are the best, but seeing as how the Mitzi is only 15 feet long and equipped with just a 25 hp Mercury engine, the pounding the winds gave us was unpleasant. Coming out of Satan Canyon and rounding Slaughter Bend was both beautiful and daunting. White caps were everywhere, and we faced a direct headwind. We sought refuge in Slaughter Bend Cove, which was a honey hole three years ago. It’s supposed to be good for Smallmouth Bass, but we have yet to catch any there. What we did catch were Largemouths and piggy Redbreasted Sunfish. This arm typically doesn’t sport Carp like Box Canyon coves, so I switched out my Bonefish Bitter for a beadchain eye Swamp Monster. (I like Kevin Hutchison, and I really like tying his flies because they work well!) I love my 4# rod—TFO Finesse, 150 grain sinking line can not be beat for fishing the 6-15 feet water column. All fished, time to move. 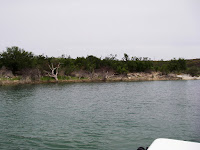 With calmer winds and fewer white caps, we boated down to Lowrey Springs Canyon. What a great decision on Cody Bell’s part. We headed as far back into the canyon as possible and found Sunfish Heaven, particularly, Redbreast Sunfish. The canyon walls blocked the wind, huge—1 pounders—Sunfish thrived and greedily ate our flies, and three Painted Buntings flew from side to side just above us. The Turkey Vultures circled high overhead causing us to ponder our own demise, but ignoring them, we made many runs through the cove's end, even anchoring to fish, relax, and photograph the birds. We caught 18 Sunfish and two Largemouth Bass, but as soon as we rounded the bend in to deeper waters, the fishing slowed greatly. Light hours would wane soon, so we bid goodbye to a wonderful spot and headed back onto the lake’s main body. 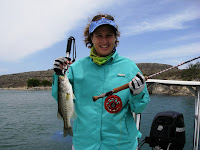 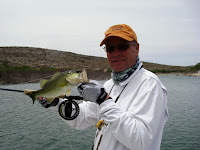 At approximately 29.36600 and -100.57500 GPS is an island that guards a deep-to-shallow water cove. We call this Bonsai Island Cove and enjoy fishing the deeper ends. White Bass are supposed to thrive here, but we only caught Largemouths, aggressive ones that swam hard from the deep to attack our flies. A 1½ pounder fights like a 5 pounder, here, and water clarity allowed us to see this action 10 feet below us. Each using our 7# rods, Cody caught a nice 1¾ pound Bass, and I caught a 1¼ pound one. Both fish bent our rods well, and we thought the fish would be bigger than they were actually. Being about 7 p.m., we fished and boated quickly.

We relocated farther south, hitting a western cove that was deep, clear, and held some fish. We named it Bad Karma Cove because, in spite of our excellent casting, excellent fly selection, and great boating skills, despite the winds, we saw very few fish. Many showed up on the fish finder off the underground hill off a point, but that was it. The boat ate Cody’s sacred 7# line, too, and so we will be on the lookout for its replacement.

With dusk dawning, we had to be selective as to what we did next. Not quite late enough in the day to visit our Smallmouth Bass spot, we hit a cove near it, but lost a lot of flies due to submerged trees, more like a submerged forest. Retrieving and breaking off the flies bought us the time we needed, and we headed for what we named Smallmouth Bass Shore. Fine fishing, I must say. I hung a fly up on a tree, retrieved it, positioned the boat back off shore, Cody cast, and SmallmouthOn, oh yeah. We continued fishing this area, and SmallmouthOn, again. I watched a Largemouth inhale my Bas

s Brunch just below the surface, and it was about 24” long and fought hard. Just below the nailknot, I had a wind knot, but was too lazy earlier in the day to tie on another leader section. I paid the price for it, too. After about a minute’s fight, I lost that fish when it dove for deeper water. Crushed and really wanting a Smallmouth, too, because that’s the way I’ve always ended our Rough Canyon trips, we fished until there was just a slight orange in the sky. The stars twinkled, the moon’s waxing crescent shone, and we left with Cody landing the only Smallmouths.

We caught lots of fish, but the winds really made the day rough, and we had a difficult time enjoying our day. We already decided if Thursday’s conditions were like today’s, we would forego the fishing.