We live in the sticks, so we get to see an abundance of birds, especially when we walk over to my parents' home.  Dad has many bird feeders for many species of birds, so it's kind of like O'Hare Airport for aves.  I really like birds and enjoy watching them.  In 2009, I was very fortunate to be present when two U.S. Fish and Wildlife biologists briefly removed Osprey chicks from their nest for their annual study of the Clark Fork River.  They explained how birds and fish go hand-in-hand (for something besides tying flies).  So, I guess that it is quite natural for someone who loves fish, to love live birds, too.
﻿
﻿ Our little house sits on an acre-and-a-half of former pasture land--cotton, corn (feed, not sweet), milo, and wheat have been grown on it throughout the years before the house was built in 2001.  I moved in 14 May 2004, and there used to be an abundance of Killdeer and nests.  Their nest numbers began to dwindle, even though I was careful to walk the areas looking for their nests prior to cutting the weeds.  (Killdeer build their nests on the ground, using small rocks to create a bed or using a small indention in which to lay their eggs).  Even though the Killdeer would return each spring, I stopped seeing pairs and nests in 2009. 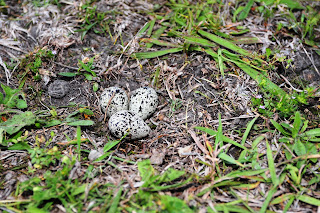 Well, this evening (on my 7th anniversary of home ownership, by the way), as I was mowing, I noticed a Killdeer pair in quite a dither.  Each adult was fanning their tail feathers at me, false brooding, and cackling up a racket.  I searched for rock clumps and couldn't find any, but the pair was going nuts.  So I watched them, and frantically began searching the area where they hovered in the unmown section, but I still couldn't find anything.  Then, briefly, the momma gave away her nest, and I was crushed, because I had already mown over her nest.  In 2005, I found a nest I had mown over cracking both the eggs in the nest; I felt horrible!)  When I got to the nest, which was built in a little indention in the ground--no rocks, I was thrilled to find three beautifully speckled, unharmed eggs in the "nest."  Whew, what a relief!  Now, we'll monitor and observe from afar and work hard to keep the chicken snakes away.
Posted by flyfshrgrl at 10:48 PM