Well, the House Boats have moved away from Rough Canyon, and a trip up the Devil's River arm made

it obvious as to why they moved to Diablo East.  We visited the NPS office on Sunday and had a really enjoyable talk with the rangers. Based upon information they told us, we went on scavenger hunts each day prior to fishing.  We found the old CP&L Steam Plant (usually completely submerged) and climbed all over it taking photos and even discovering the high point benchmark.  As in the years following the 1998 severe drought, the lake will once again fill up, and taking the pictures and exploring the places that are exposed currently will make us better fishermen, I think.

Okay, excuse the corny irony, but...on the way to Rough Canyon, we had it rough when the flats boat trailer had a flat.  Fortunately, we got it fixed quickly, but not before we had three different offers of assistance--God Bless Texans!

We put in and began heading north, to see:  1) how far north we could boat and 2) where exactly, we were going to fish.  Let me just say, my jaw hung slack, because the low water levels left me dumbfounded and amazed.  On the bright side, the goats and sheep will probably be some of the best livestock in years due to the new, lush green grass on which they gorged themselves.

Rough Canyon kicked my tail.  I caught no fish, had only two hits, and one hook-up.  Cody Bell fished a five species day with two more hook-ups--a Striper, a Hybrid Striper, a Redbreast Sunfish, a Largemouth Bass, and a Blue Catfish, a first for CB3.  Unfortunately, we could not find our Smallmouth Bass. We found the area, but no Smallies--a first for us.  Winds were high and made trolling difficult, so after fishing a few coves on the west, we fished the river walls on the east with much calmer waters. 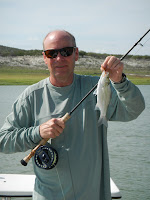 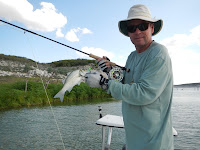 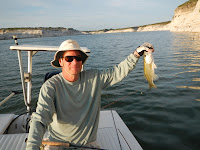 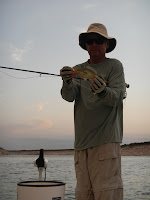 So, how far north did we make it?  In a 15 ft. flats boat, we could safely travel no farther than 29.36600 North and 100.57500 West, which put us in 2 ft of water.  Bonsai Island and Cove (our names for the geography) were completely dry, and Cody hiked back in there to snap photos and see what it is we're fishing.  I tried fishing, but the buzzards began circling on my third cast.  It's pretty bad when they're circling looking to take the fish from anglers.  Amistad really isn't a lake here, it truly is the Devil's River.  Lowrey Springs Canyon--dry.  Slaughter Bend Cove--dry.  Indian Springs--could hike to it on dry land and then climb 7 ft. above the water column.  Satan Canyon--dry.  SAD!