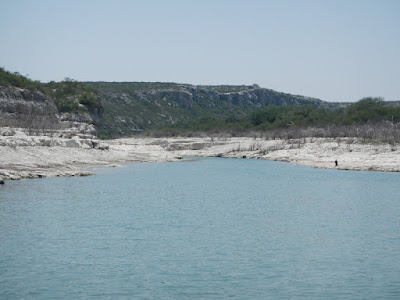 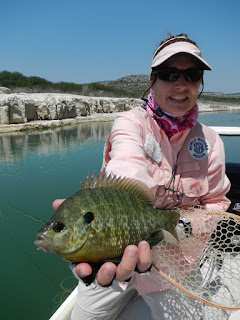 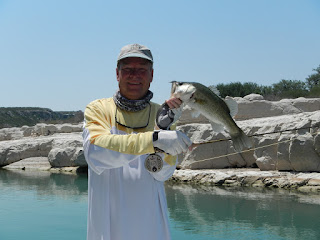 Our annual outing to Lake Amistad is shocking.  I can not believe the lake, and I am having difficulties grasping what 21 feet low, 63% capacity means.  We fished our local haunts, or at least where we could boat.  We began the trip, as always, at Rough Canyon up the Devils River Arm.  Even in our Mitzi Skiff, that can be push-poled in a foot of water, we could only navigate 150 yards upriver from the mouth of Satan Canyon.  We could not reach the Bluegill and Carp area at Four Poles (we couldn't even see the Four Poles).  Satan Canyon had little trees, and after navigating a low spot, we headed back to as far as we could go, which was .2 miles less than we were able to proceed last year.  We discovered two springs, took pictures so we could see where fish bed and hide when the water levels are normal.  Near the springs feeding the canyon waters, Largemouth Bass and Redear Sunfish thrived.  Cody pulled a 2 lb and 1 3/4 lb LMB out of the canyon, and I had two Redears at 3/4 lbs each.  We saw bedding 1 pound LMBs, but left them alone to spawn.


An upside to the drought, I finally saw Indian Springs.  I guess everyone else was excited about seeing it too, because it was always occupied.  People even hiked from the cliffs down and spent four hours at the springs. 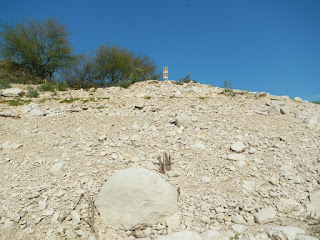 Slaughter Bend Cove still exists and can be boated and fished, but only about half of the canyon has water.  We caught some LMB and Sunfish, and we discovered a spring that is about 22 feet below the NPS No Camping and No Fire building signs, and we named the spring "No Camp Spring."  The thing about the signs, in previous years, we have always been level with those signs as we boated by to fish farther into the cove.  Astounding, just astounding. 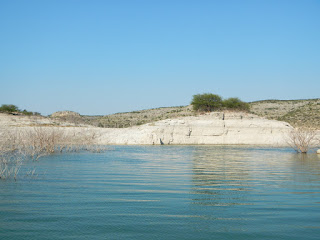 We chose to fish an area we deemed Bonsai Island and its cove.  We always catch LMBs there, always!  This year, we learned that what we saw as an island is really a long undulating peninsula.  The treetops inside the cove had always been slightly submerged and held fish, especially along the cliff wall.  We fought getting hung up, and we had no hits, so we left.

We moved farther south to fish a Lowrey Springs Cove, which we discovered last year.  Sunfish, especially Redbreasts, were abundant and big, averaging a pound, and Painted Buntings flew everywhere.  We caught a total of three Sunfish, but we did get to see Lowrey Springs.  Dusk was growing near, so we headed out to get to our Smallmouth Bass Shore. 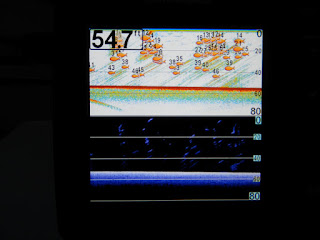 We found our reliable Smallmouth spot, and seeing the terrain we once boated over, I thoroughly understand how it attracted and held fish.  The depth finder lit up with an abundance of fish, and the twilight topwater tango was on.  Cody and I both tied on deer hair flies.  (Prior to that, all Cody fished was his CodyBugger on floating line, and I used a green Bonefish Bitter on floating line.)  I had not used mine since tying it in Diane's spinning deer hair class.  I nearly came out of my skin and swallowed my tongue when a nice LMB inhaled my fly.  I fought the fish, but seeing as I chose a long leader, after a minute of wrangling with her, she popped my line.  I diligently tried to catch any other of those showing up on the fish finder to no success.  Cody switched back to a sinking line, but no fish bit.  Having thrown our arms out, quickly losing daylight, and satisfied with 15 landed fish for the boat, we called it a night. 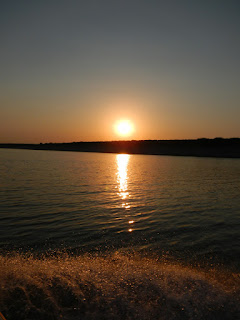 Diablo East and the canyons NW of the dam are on the map for tomorrow.