Bright Monday (the day after Easter in the Christian calendar) was a holiday for me.  Cody had promised we would go fishing Monday after working hard Easter Sunday afternoon pulling weeds, vines, and cleaning out the flowerbed.  (Seeing as to how sore we both were, maybe we should have fished first and done yard work second.) 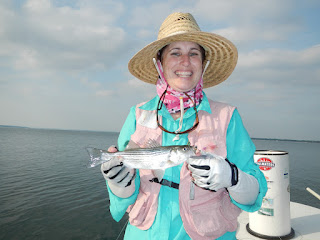 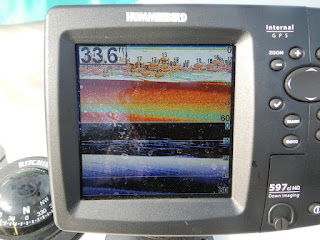 Getting on the water around 4:15, we thought we would be pressed for time, so we put in at Eisenhower State Park to put us a little farther up the lake.  We didn't have to travel far.  We hit the first cove, fished it pretty intensely, and no fish, no bites, no takers.  We worked the shore line heading east towards the next cove, when we talked about moving farther up river/lake to chase those spawning ladies.  As Cody maneuvered the boat, the depth finder lit up like a Christmas tree.  So, we stayed and fished and hooked in to one Striper after another.  Cody out-caught me, with a total of 18 fish for the boat in a little under four hours; Cody boated 12 and me six, and I can't remember how many more hook-ups we had, but there were plenty, some just 1 - 2 feet from the surface--hard hit-and-runs.  Also, this was the calmest day I have ever spent on Lake Texoma.  The wind was anywhere from 0 to 3 miles per hour!  I did not know this lake could even be calm, but calm the seas were--a first for me. 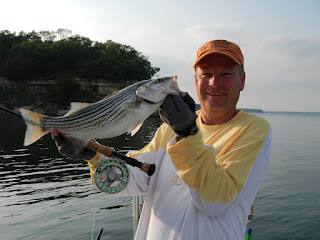 The best Striper of our day was a 3.2 lb fat girl ready to pop!  I wish I had videoed the fight that fish put up.  That Lady Hybrid bent Cody's 10# TFO TiCrX double several times, and did she ever put the zing in his reel when she dove and ran.  I love fights like that, and these fish didn't just eat the flies; they were inhaling them.  Many hook-ups occurred at the back of the tongue past their tooth patches.  Even with barbless hooks, we had to be careful removing them.  One even was hooked in the gill plate.  Careful hook extraction saw that boy swim away.  On a personal note, this was the first time I fished my Bass Brunch fly targeting the fish for which I designed the fly, and it worked well, so I was really pleased. 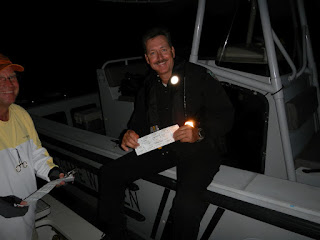 I also experienced another first.  At dusk for the first time in my 29 years and 10 months of owning a fishing license, I was finally asked to show it.  We were leaving the fishing for another day, when the third boat of the day bore down on us.  Being in a flats boat and only having one engine, it does get a little intimidating, especially when the other boats change their coarse at the last minute.  Unlike the other two, though, this one had blue lights, meaning it was a Texas Game Warden.  I don't know about other states, but in Texas, the Game Warden is the most powerful law enforcement official.  They need no warrant to search your boat, vehicle, person, or property.  Boundary lines are non-existent for them.  They can seize your property without a warrant.  They are some great folks, but they mean business.  Of course, we had our licenses, boat registration, life jackets, and fire extinguisher, and Dale Moses was a really nice fellow, but still, if you're smart, you give a Texas Game Warden all the respect; they can make your day or ruin your day.  After saying good night, we boated back in, loaded up, and headed for home.  Being with the Game Warden, kept us out on the water an extra 45 minutes, so we arrived home later, but the fishing was all worth it, regardless how tired I was today at work.  Full and near-full moons make for excellent fishing, hands down!
Posted by flyfshrgrl at 11:48 PM