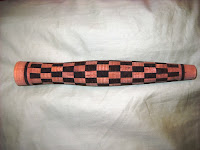 Fly fishing is an art--in four dimensions and is both modern and classical, as well.

Many have seen the movie A River Runs Through It, where Jason Borger is Brad Pitt's stand-in for the casting scenes.  Watching Jason's casting, hearing Jason's casting demonstrates one aspect of this unique art.

Making a good cast or a mediocre one and hooking and landing a fish, most of the times a beautiful fish with gorgeous colors, stripes, spots, and shine, offers another artistic aspect.

However, what prompts people to continue fly fishing when casting is an innate habit and landing fish is a frequent occurrence?  Fly tying and rod building are the answers.  You know, someone had to tie the flies seen in fly shops, because there is not a machine that ties them.  Save some money and perfect fly-tying skills, so that fish are biting flies you tied.  It really is an added bonus, not to mention a third facet of this beautiful art.

True, pure fly fishing art form is presenting the perfect cast with a rod you built and a fly you tied and landing a fish.  Taking a blank and creating a unique design, which sets your rod apart from the store-bought rod, creates an added addiction to fly fishing.  I guess that is why Norm and Brother Mike suggested I name my first rod AA, because it is addicting (and due to work's interference, it took me from August to April to build that first rod).  Catching fish on a rod you built does nothing but encourage the building of another rod.  Just ask our friend Jason, who built 14 rods under Norm's tutelage.

Many of us in the Dallas Fly Fishers had a wonderful teacher, Norm Goheen, who on Wednesday nights taught us the meticulous, rewarding art of rod-building, well, building graphite rods.  (If anyone wants to learn to build a bamboo rod, Colonel J.A. Bradford is the man to see.)  Norm fought a courageous battle against several cancers but succumbed to the disease at the end of November 2009.  I love TFO rods, and with the exception of my Casting for Recovery 5# rod, I built every one of them under Norm's guidance. 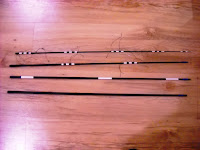 I did not have a four-piece 6# rod, so I began one under Norm's instruction in August 2009, but I did not finish it before Norm passed away.  I had the vision of the rod in my mind and shared it with Norm, who thought it would be an interesting rod, but I put it aside with Norm's passing.  Seeing as it is now needed, I picked it up again to work on it.  I have tried to look at it as Norm would, critiquing its craftsmanship like Norm.  I think it would pass his muster.  I have unwrapped and rewrapped some guides that I did not feel Norm would approve. 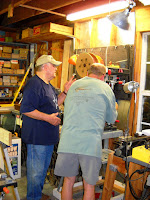 Most handles are designed with a man's hand in mind, which means the handles are bulky and chunky.  Therefore, Cody started designing the handles for my rods, my 2#, my 4#, and my current 6#.  Cork is delicate, at times, and boring out the cork on the end for the reel seat to slide into is not an easy process.  Tonight, Dad, Cody, and I used Dad's drill press, not to mention the presence of six hands, to create a perfect handle.  I know Norm would be impressed with our precision and Cody's beautiful craftsmanship. 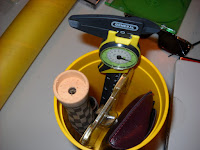 I miss Norm.  I miss his lessons on Wednesday nights.  I miss his advice.  This is the last of my rods that he touched and offered construction advice.  It has taken 9 months to really decide if I wanted to continue rod building.  I knew I wanted to finish this 6#, just because Norm had a hand in it, but what about future rods?  Do I want to build a new rod without Norm's influence?  I have been thinking about a 7# rod and have a design scheme in mind.  All that we learned from Norm is in our minds, and we collectively share with one another what we remember Norm teaching us, so while I have five rods built under Norm's direct supervision, all of my rods will have Norm's guidance and passion in them.  My goal is to have a collection of rods from 2# to 10# that I built, with the exception of my 5#.  I need a 3#, 7#, and 9# to complete my goal, and while I wish my teacher and friend was here to help with those, Norm will be present in each rod. 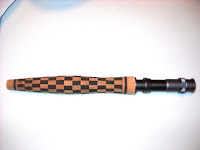