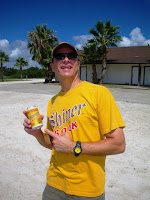 The first saltwater fish I ever caught was a Redfish, albeit, an approximate 5" length Redfish, but a caught Redfish, nonetheless.  I caught it wade fishing with my friend Jack in the Lower Laguna Madre.  I think Redfish are pretty.  Not truly red like a Red Snapper, the Redfish possesses beautiful colors--the obvious black "eye," orange body with 24K gold flecks near its belly, it is a beautiful fish, but what I think is the most beautiful about a Redfish's hue is the shimmery, light turquoise color edging its fins, particularly the tailfin.   So, when I was asked to join Jason, Malcolm, and Cody for an extended weekend Redfishing trip at Port O'Connor, I could not resist.  However, it took me forever to pack and decide what I wanted to take, so Cody did not get to meet up with Jason and Malcolm for the Shiner Beer Factory tour.  Sad Cody.

Mullet drive me nuts!  I know people in Florida eat them and even serve them on the menu, but mullet are annoying.  They jump out of the water and sound like Bass, so the head turning is a natural reaction--for nothing; they spook and scare other fish near them; they move in on a Redfish's feeding ground; they just make a nuisance of themselves.  Saturday we fished with a guide who pointed out places for Cody and I to go, and took Jason and Malcolm to another spot.  We fished diligently all morning, but with the plethora of mullet, all other fish remained elusive.  I did get a good hit from probably a speckled sea trout, but that was it.  We moved to the area where tarpon exist, but saw beautiful porpoises rolling, instead and no fish.  We waded and some other boat encroached in to our area.  Basically, outstanding desire + excellent effort yielded NO FISH, argh!

When we five met up again, Jason was the only one with a bite and landed Redfish.  Malcolm thought he snapped the photo, but it wasn't present on the iPhone when we broke for lunch.  Jason said he had it stored in his memory and that was all that counted.

Cody and I headed out again, mainly sightseeing and attempting to go beyond the breaks, but the waves rolled too high, so we headed back into the bay, all the while the black Matagorda Island Lighthouse peered above the southeastern horizon. 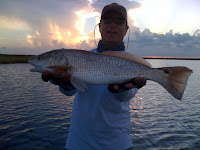 Hitting the water at 6 a.m. again Sunday, Malcolm and Jason rode in Malcolm's Mowdy and Cody and I in the Mitzi.  We headed to the Saluria Bayou area, and though it took a while, Malcolm motored Jason over to a school.  Jason made about 15 false casts, landed his fly in the middle of at least 10 schooling Redfish, and immediately, Jason's 8# rod bent and bent hard.  Meanwhile, Cody and I hung back watching the rest of that spooky school make a V wake toward us.  I casted to a tail about 30 feet away, and what should happen, an interfering mullet scared the school to hither and yon.  Meanwhile, Cody and I watched Jason work that Redfish who peeled line off that Lamson, and then Jason reeled it in, all against a gorgeous sunrise.  I was glad to see Jason land that fish, because two days, amongst four people, a total of three Redfish were caught.  Jason had two, and Malcolm would catch one later that morning.  They genuinely are easily spooked fish! 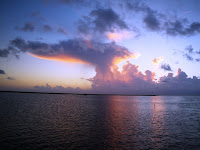 Not long after Jason caught his fish, I casted to two tailing Reds, but one only nipped my spoon fly, and then there were none.  Since we were in an outgoing tide, we should have paid more attention to our grass flat, that would eventually become dry at low tide.  Malcolm's boat maneuvers like a mini-airboat, skims over water shallow or deep.  The Mitzi is a flats boat, but the flats became too dry, and Jason and Cody had to push the Mitzi out of the flat--not an easy task in the sandy, more muddy, areas.
Eventually pushed out in to the channel, we knew Malcolm's boat could go places the Mitzi could not, so he headed off to a favorite fishing spot, and Jason, Cody, and I took the long trip back to Clark's.  What was supposed to be a long weekend, quickly became a regular weekend, and even though we enjoyed one another's company, this bad fishing trip, yes, I said bad, and that is a first for me, ended, and we headed home, with a side stop in Lulling, TX to buy a wonderfully sweet Black Diamond watermelon. 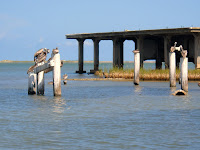 I know Robert guides the Port O'Connor area, and his clients land fish, but I have a negative impression of the area.  The best thing about POC, besides fishing with friends and seeing a healthy Brown Pelican population, was the lighthouse.  A black sentinel that served as a beacon, even in the daytime, and proved that while the fishing skills might have been lost, we would never be.
Posted by flyfshrgrl at 10:19 PM