All my life, my Mom has striven to instill in me that life is not fair.  On my grandparents' wall hung a gorgeously decorated Serenity Prayer, which is probably one of the first poems I learned.  As sincerely as Mom tries, through no fault of her own, Mom fails.  For me, life is very black or white, with no gray whatsoever, which makes life easier to handle, because things are right or they are wrong.  So, what happens when things aren't fair?  I thought about this on my way home tonight, and I feel I need to rectify an unfairness. 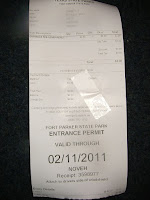 Did you know that you do not need a fishing license to fish waters in a Texas State Park's boundaries?  Did you know that during the late fall and most of winter, that the Texas Parks and Wildlife Department stocks almost 1,000,000 trout throughout Texas' state parks?  Did you know the stocking is done cost-free to the public?  So, what is a fair price to pay to get to fish in a state park where they have stocked trout for the public to catch and keep, limited to five per day?  Would you believe me if I told you $2.00?  I think that is a ridiculously unfair price--unfair for TPWD, that is. 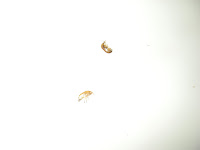 On Monday 31 January, I headed to Fort Parker State Park, because about a week prior, TPWD stocked a 1,000 trout in Springfield Lake.  The park's boundaries encompass the historic town of Springfield; only the ghost town's cemetery and 4 acre lake exist, today, and what a fine fishing lake Springfield is.  I did not have my float tube with me, so I waded in to the waters, but the heavily silted bottom keeps the wading pretty close to shore.  Not catching anything this day, I left after a two-hour foray, but I vowed I would be back Tuesday with float tube in hand.  The winter storms came, and so, the waders stayed in my car.  My vinyl lunchbag rested near my waders.  What a valuable lesson I learned, when I retrived my lunch bag .  There were these strange brown things all over it.  Upon further inspection, they were brown scuds, or from the fishes' perspective, dinner!

Armed with the knowledge of the fishes' diet, today, I set off with my float tube.  I tied on a size 14 Flashback Prince Nymph, and I reaped rewards.  After about 15 minutes on the water, I hooked up with a nice size Rainbow that jumped no less than six times!  Wahoo, I was having fun with my 2# rod.  I land it, take photos, release the trout, cast, and FishOn! again.  Bluegill this time.  I land it, take its picture, and release it, and cast.  FishOn! again.  Small Rainbow who squirms off my float tube before its picture is taken.  Cast and FishOn! Aaahhhgain, Yes, four casts; four fish!  It was another small Rainbow.  I touched the leader and was putting him on to the float tube net when he flopped off.  I receive about a 15 minute reprieve, and then it was FishOn! again, and this time it was a Redbreast Sunfish, a new one for my species list, and this boy was a p-i-g hog!  He really engulfed that fly.  Once retrieved, I cast a few more times with no success, and then I hit that same spot the Sunfish occupied, and it was FishOn! again.  This time, a small Smallmouth Bass chomped down on that nymph.  He gets his photo taken, and I release him back to the drink.  I cast and move around the western end of the lake.  The sun is beginning to set, and the fishes' strikes are becoming lethargic, when this little Rainbow decided my nymph was supper.  Resting in the net, I snap his photo and send him on his way. 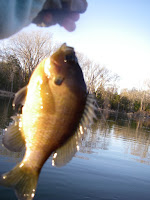 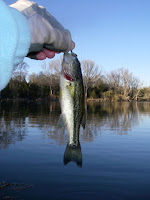 With a numb backside, hands, and legs, I decided to call it quits.  Eight fish/four species (with a new one to add to the list) in less than two hours is waaayyy better than the $2.00 entry fee.  I built my 2# rod; I chose my fly, carefully matching a food source; I fished from a float tube.  Yes, I really increased the odds that I should catch fish, but I feel that TPWD is getting an unfair deal, and I have no idea how to get them back on the right side of fairness; it would take a lot, considering the day I had at their place.  A good work day had turned really rotten, and then a $2.00 deal made everything good.  One of my favorite columnists is Regina Brett, and so I shall end with one of her 50 Life Lessons..."Life isn't fair, but it's still good."  Ohhhh, yeahhh!