From Pond to Plate to Palette

I love to fish.  I attempt to fish often.  I think fish are gorgeous and have exquisite color palettes.  Fish taste delicious and make for an excellent meal.  Until last August, I never practiced catch and keep, but since I was fishing for Coho Salmon, which will die once they return to freshwater, I kept six males I caught.  Tuesday, I once-again kept fish for table fare. 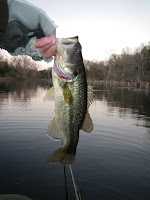 Cody returned home from the Burnet Ranch, and I regaled Cody with tales of fishing Springfield Lake.  Well, Cody decided it was time to catch his first fish of the year.  Armed with his GPS, general directions from me, his float tube, fins, and rod with a Flashback Beadhead Prince Nymph tied on, Cody waded out in to cold, clear water.  I arrived about 30 minutes later and heard a tale of a nice bass who broke off.

Prepared to catch fish, I explained where the previous Friday's honey hole was located, we selected our spots, and began to cast.  Before long it was FishOn! for Cody Bell.  Bam!  I followed and we were FishOn! double.  Cody called that his Rainbow Trout was big enough to keep and so we paddled towards the middle.  I wasn't paying attention and accidentally let my trout out of the net.  Cody stocked the creel with his catch and challenged me to catch some supper, and catch we did.  Cody ended up catching 18 fish for the day, and I caught 13. 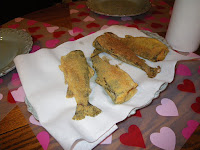 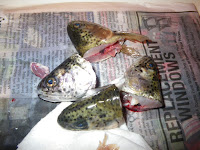 We chose to keep four pretty, pretty rainbows.  Cody cleaned and gutted them, and we were homeward bound.  Now, I don't mind eating animals, but being the purveyor of their death has never appealed to me.  As Cody pan-fried, in butter, those fillets, I kept looking at their heads.  Great smells to the right, death to the left, and so it went, much like a good tennis match.  We prepared rice, green beans, and corn bread (in bream shaped pones) to accompany our tasty fillets. They were tender, flaky, and oh so fresh--delicious, just delicious, and not much meat left on the bone! 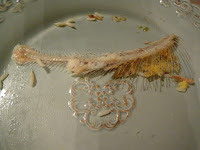 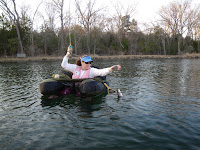 Since dining on our trout, I dreamt: the headless fish was after me as I waded in a stream; fish heads ate my toes, and, of course returning to the crazy childhood dream, it was no longer safe to go to the potty.  In the future, I do not know if I will practice catch and keep, but I do know, I'll keep on catching!
Posted by flyfshrgrl at 10:48 PM