Bass on the Fly Fishing Tournament

Cody and I headed to our annual trek to Lake Fork to participate in Ted Warren's Bass on the Fly Fishing Tournament.  We have participated in the three previous years' tournaments, and the door prizes and raffle items and payouts have been really good; this year was no different, except the payout had to be larger, because there were 41 participants. 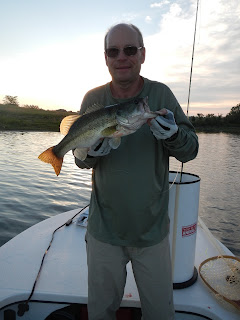 In previous years, for the boaters' division, the fish had to be brought in and weighed, which means slot fish, fish between 16 and 24 inches, could not be kept.  So a boater may have caught any number of fish, but if the fish measured within the slot, they could not count, frustrating but important for the vitality of the fish.

This year, there was a change for the boaters.  After catching, we photographed and measured our fish, and then released them, so whether a fish was in the slot or not, we could count it as one of our best five--WHOOP!  The bad news, Cody and I have a difficult time fishing Lake Fork.  Every year, one of us is the one who catches fish, while the other fishes their heart out but ends up with very little, if any fish.  This year, Cody did the catching and I did the cheering, netting, and photographing.  Only one of our fish counted, because the other two were White Bass--one was particularly nice. 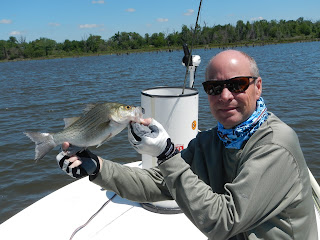 I ended the day by hooking a Bowfin--a new-to-me species.  At first, I thought it was a Flathead Catfish, but on its second surface, Cody saw it, and became really excited, hollering, "It's a Bowfin!  It's a Bowfin!"  It surfaced three times, and it was an approximate 12-15 pounder!  It went under the boat, swam perpendicular to the boat, went to the front near the trolling motor, but the fight was on.  Then, Cody asked, "What poundage is your leader?" and before I could answer, that Bowfin swam 180˚ from me towards the motor, and the 20 pound leader section snapped about 1mm below the knot.  Bye, bye, Bowfin. 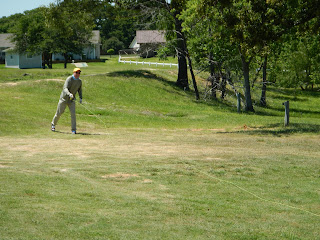 Cody participated in the Distance Casting Contest, but this year, Brian Nims casted 96 feet to take first place.  Cody won years 1 and 2 and Brian Nims won years 3 and 4.  The Accuracy Contest had a four-way tie, so they had a cast-off to determine the winner.  Everyone won a great raffle prize, and the Dallas Fly Fishers brought home the club trophy for the third year (no team trophy was awarded the first year).  All-in-all, Ted Warren and his wife hosted another fun tournament.