What a beautiful day to go fishing, especially for bass.  With Texas Parks Pass in hand, I met Cody after work at Fort Parker State Park to fish the ever-so-fun and beautiful Lake Springfield.  Now, Trout Stocking occurred Sunday, so a plethora of bait chunkers lined the eastern shore.  Cody and I were armed with our float tubes, so away from the crowd we kicked, including the bratty kid who kept slapping the minnow bucket against the water--encouraged by his dad, nonetheless! 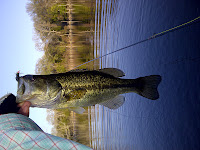 It was Largemouth Bass and Bluegill fun on small weight rods--too warm, 79 degrees, for trout, but that was okay with me.  The CodyBugger and GirlieBugger were hot flies catching fish after fish, 19 total in about two hours.  As dusk approached, I kicked towards the south to fish the stumps.  I couldn't resist it; I tied on my line my Mike's Mouse pattern that I learned to tie in Diane Blair's Deer Hair Class.  First plop on the water, hit.  The fish tried it again, but this Mike's Mouse is tied on an 1/0 3388 Mustad, and that fish couldn't open wide enough.  I had another hit-and-spit, and then, it was FishOn! my Mike's Mouse.  I tried to act like I'd caught a fish before, but I was pretty excited.  I tried to figure out how to capture this on video, with no success.  I messed around with the camera enough so that after leadering the fish and hoisting it out of the water, it shook the fly before I could get a picture (next time, I won't forget my net).  However, Cody saw all the commotion from afar, which was good enough for me.   Daylight eclipsed, and it was time to hike back to our cars, giddy and gleeful.

Geocached the Park's official stash, which was a good one, and left my signature fly fishing cache!  What a  fun place!
Posted by flyfshrgrl at 11:47 PM